The ICC World Cup 2019 is in full swing. And here is the Full Schedule, Time Table, Date for this grand event. A number of world cup matches will be played in this tournament which begins on 30th May 2019 (when England will play against South Africa in London) till the final match of ICC cricket world cup scheduled on 14th July 2019. The host of this world cup is United Kingdom (U.K.) and so all these matches will be played there. In all, 48 matches are lined up for the upcoming world cup, including the final and semi-final matches. There is much curiosity in peoples’ minds about the upcoming world cup. 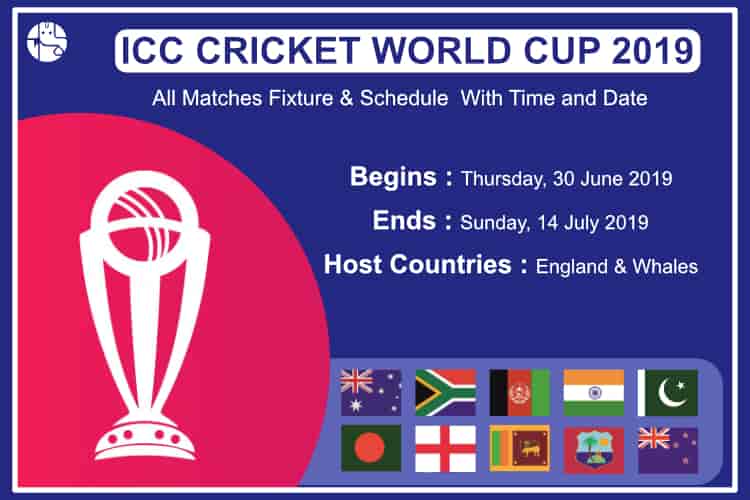 And there is much at stake for so many teams across the world. Our own Indian team is looking confident and hopeful under the captainship of Virat Kohli. In order to give some clarity to the future performance of various cricket playing teams, Ganesha has analysed the situation astrologically and carried out cricket match prediction. We will present here all ICC cricket world cup matches prediction 2019, forecast for the various world cup fixtures. We would like to tell you that we had also made predictions of all the IPL Matches, wherein many of our forecast had come true.

Well, to begin with, the following is 2019 world cup match schedule (the world cup time table):

Indeed, the world is diverse and plural. It consists of so many life forms and so many inanimate objects & elements. And all of them together form this wonderful planet. Our planet Earth is very special, perhaps it is the only planet in the entire Cosmos (known so far as per Astronomy) which supports life and the most cherished human life. The human species is called the crown jewel of creation, the only species in the world which holds intellect and the power to reason and discern. The emergence of humankind on this planet has given rise to Civilisation, the most elaborate mega-structure which is the platform & canvas for all the developments and activism. As humans are considered the foremost beings on this planet, it bestows huge responsibility on them to create a peaceful planet which is high on resources and less on lacking.

Towards A More Equal World

The direct outcome of civilisation is the coming up of different countries or nationalities. A country is a socio-political division of humanity, wherein the people share at least some cultural and ideological bonding. The purpose of a country is to elevate the quality of life for its residents in accordance with the onward march of human civilisation. However, over the last several millennia, the countries have become embroiled in conflicts and confrontations, which is unbecoming of development and which is the road to despair and downfall. But, in the last one century and more so after the World War -2, the world has become comparatively more equal as colonialism and imperialism have either gone out of existence or have changed to much milder forms.

Sports Can Foster Healthy Competition, It Is The Right Way To Compete

However, jingoism (aggressive nationalism) and racism continue to damage peace & tranquility from time to time. And it is said that sports is the balm which can lessen aggression in the mind and lead to a more calm surrounding. Sports is a very important platform wherein the countries compete with each other not by the might of their armies but by the skills of their players. Sports exhibits a healthy spirit wherein the respective teams perform not just to win but also to learn. Indeed, sports fosters a sense of fair play.

Well, when it comes to the South Asian Subcontinent (also known as the Indian Subcontinent), among the various sports which ate played here, cricket rules the roost. Cricket is sometimes called the new religion of India and other neighbouring countries. Cricket is so much integrated into the peoples’ psyche that it is impossible to exclude cricket from this country, all the more so when an important cricket series is underway. Now, the Maha-Kumbh of cricket is almost here. Yes, the much awaited 2019 Cricket World Cup is all set to begin.