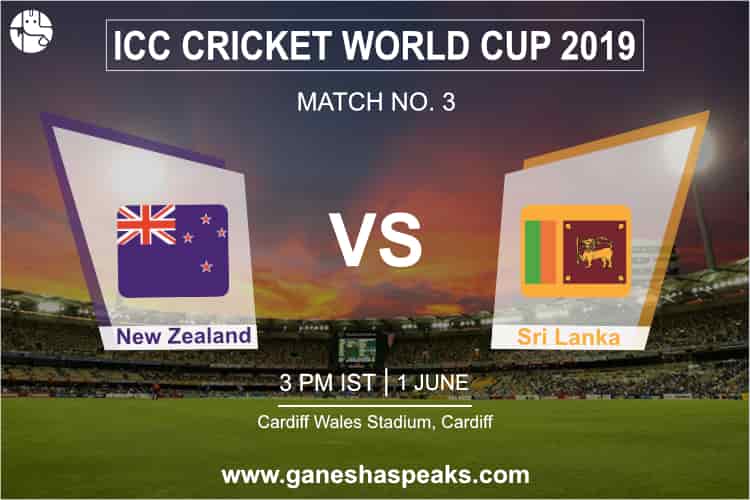 In terms of the ODI standings, New Zealand is on the 4th spot while Sri Lanka is on the 9th. Sri Lanka last won the World Cup in 1996; however, New Zealand has not won the cup yet. Looking at the recent matches, New Zealand has been doing well in the ODIs. After all, the world cup is the biggest championship in the game, and no team can afford to take things lightly.

Ross Taylor from New Zealand is one player who cannot be taken lightly, especially when it comes to ODIs. He made his debut in 2006 and seems to be playing just as well even today. In fact, he is one of the best ODI batsmen we have today. The same can be said for Martin Guptill and Kane Williamson. As far as Sri Lanka is concerned, Angelo Mathews is one to watch out for.

Luck also plays a significant role in games that make or break a team. We wonder who will win the 3rd match of the ICC World Cup 2019 as per astrology. Who do you think will win? Will it be New Zealand? Or will it be the Sri Lankans? Ganesha has analysed this game closely. Let’s find out what He has to say.

Let’s find out what Ganesha has to say about the game!

As per Ganesha’s readings, the team to win the toss will be Sri Lanka. Who do you think will win this match? Will it be Sri Lanka? Or will it be New Zealand?

According to Ganesha, the winner of the 3rd match of the ICC World Cup 2019 will be New Zealand!


Know What Stars Says About You Today!