England vs West Indies Match Prediction: Who Will Win ENG vs WI Match? 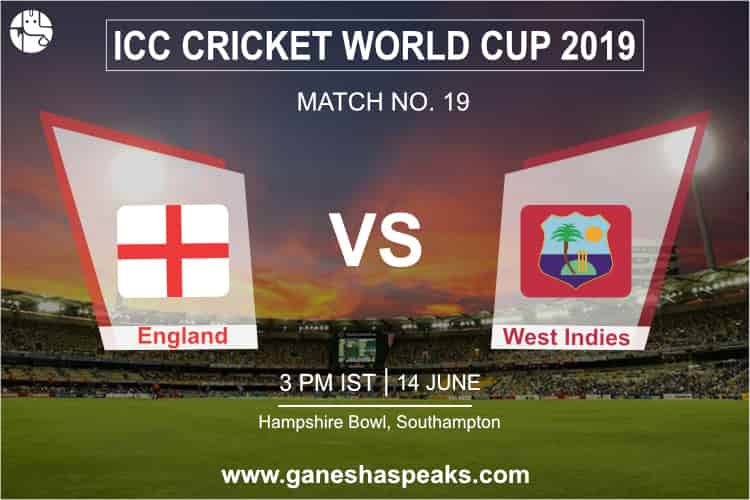 The hosts of the 2019 ICC World Cup are all set to take on West Indies in the 19th match of the current edition. England has won two of the three games they’ve played so far. They lost to Pakistan in the 6th match of the ICC World Cup 2019. Eoin Morgan, the English skipper, was all praises for Jason Roy who was a major contributor in defeating Bangladesh by over 100 runs. It was surely an improvement compared to how they played against Pakistan and lost.

West Indies, on the other hand, have been struggling to make a mark in the competition so far. They did play exceptionally well against Pakistan; however, given how teams like India, Australia and New Zealand are playing, the West Indies have a lot of catching up to do. They have an exemplary batting order, and they try and focus on the same to win games.

If technicalities are to be considered, England has more prospects of winning against the West Indies. However, Ganesha has a keen eye while it comes to predicting matches. Let’s find out what He has to say about the 19th match of the ICC World Cup 2019.

As per Ganesha’s readings, the team to win the ENG vs WI toss will be West Indies. Who do you think will win this match though? Who will outplay the other?

According to Ganesha, the winner between England vs West Indies Cricket Match and the 19th match of the ICC World Cup 2019 will be West Indies.