Mahadasha and Antardasha – Are they affecting you? 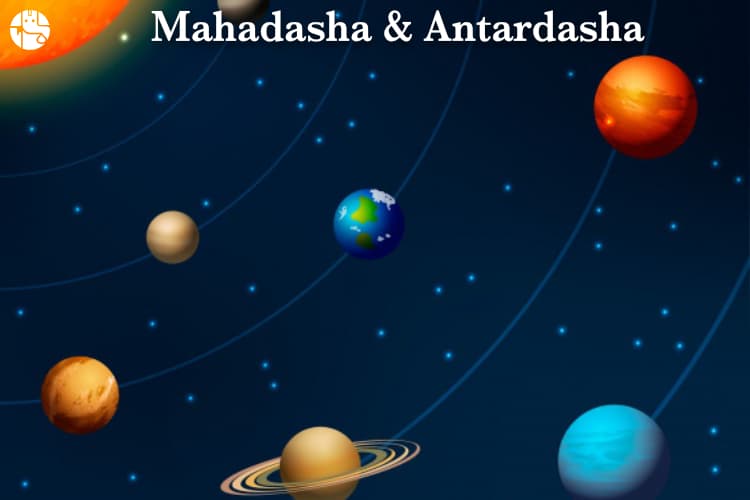 Planets, their positions, and movements or transcends have always been crucial in Astrological predictions. Every planet has a ruling period in a native’s life. These ruling periods are known as Dashas. There are several Dasha systems in Vedic astrology. Some of the Dashas are the Vimshottari Dasha system, Ashtottari, Kaala Chakra, Chara, and Yogini Dasha system. The most prominent and accurate one is the Vimshottari Dasha system. The cumulative time of the nine planets in a native’s life is 120 years. So, it is unlikely for a Dasha to be repeated in one’s life.

The Dasha that will be operational during the life of the native, depends upon the position of the moon in the star constellations, and in the birth chart. The degrees in which the moon is placed, also determines which Dashas will be in operation during life. This method of calculating Dasha is based on Moon Nakshatra. The prediction of this method is considered accurate. It is also known as Mahadasha.

Calculate Your Vimshottari Dasha or Mahadasha

To determine the period of Mahadasha, Vedic Astrology allocates three nakshatras to each planet. This makes the number of nakshatra to twenty-seven. Mahadasha of the planet is based on the placement of the Moon in certain Nakshatra. The Nakshatra Lord will decide the Mahadasha of a certain planet at the time of birth. If at the birth time, the moon enters certain nakshatra, the native will experience Mahadasha of the ruling planet of that nakshatra. But if the moon had just passed and only a few degrees remain, then a short period of Mahadasha will be experienced for that ruling planet.

Above is the order of the Vimshottari Dasha system. For example, if a person is born in Aries sign in the Ashwini nakshatra, he will get the balance Mahadasha of planet Ketu first, followed by Venus, Sun and so on.

Vimshottari Dasha and its influence

The planets can be benefic or malefic for different Lagnas. Hence, the result of the Mahadasha will vary with the Lagnas. As an example, we know that Saturn is auspicious for Aries Lagna while Mercury is auspicious for Virgo Lagna. Also, if any planet is afflicted then the native shall not experience the benefits of the benefic planet. But if it is placed in the correct house with benefic traits, then it will provide all comforts to the native.

Jupiter Mahadasha brings with it prosperity and expansion. Saturn Mahadasha makes the native responsible and increases endurance. Mercury Mahadasha enhances the speech and writing skills of a person. Ketu Mahadasha helps enlighten the spirituality and knowledge. Beauty and charm are the awards of Venus Mahadasha.

As these Mahadashas yield positive results, these can also have a negative impact on the native’s life. But Remedial solutions for each Dasha’s negative effects is available in Vedic astrology prediction.