West Indies vs Bangladesh Match Prediction: Who Will Win, WI or BAN? 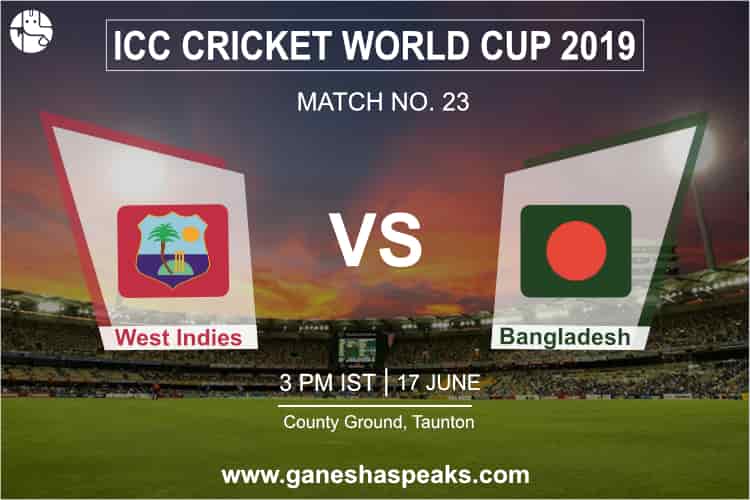 West Indies vs Bangladesh Match Prediction: Who Will Win WI vs BAN Match?

Indeed, sports promotes the spirit of healthy competition. It fosters the principle of merit. It creates a platform where teams of different nations compete with each other on a level playing field. It opens up an avenue in which the teams representing different countries are judged by the way they perform, based on their skills. It is in sharp contrast to bloody wars between nations, wherein people kill each other, and all of which is justified in the name of patriotism. Well, like so many Sports events, the ongoing World Cup Cricket is a boon to the world of nations. On Monday (17th June 2019), another significant cricket match is all set to take place. Yes, West Indies is going to play against Bangladesh, a contest which is expected to be exciting and interesting.

Both the teams, West Indies and Bangladesh are largely at par with each presently, as per their performance in the ongoing World Cup so far. West Indies is on the 6th rank (by the number of points which the teams have got by winning or losing matches) while Bangladesh is the 7th team in that order. Sports watchers are fascinated by the performance of Bangladesh. This team started playing cricket only a few years ago and now it is performing better than several well-established world-class teams.

Stakes are very high for both the teams. Whichever team wins this match, will get a crucial advantage, keeping alive its hope to do well in the latter stages of this world cup series. Well, read on to know which team will win this match as per Ganesha’s predictions:

As per Ganesha’s readings, the team to win the toss will be West Indies. Who do you think will win this match though? Who will outplay the other?

According to Ganesha, the winner of the 23rd match of the ICC World Cup 2019 will be West Indies.