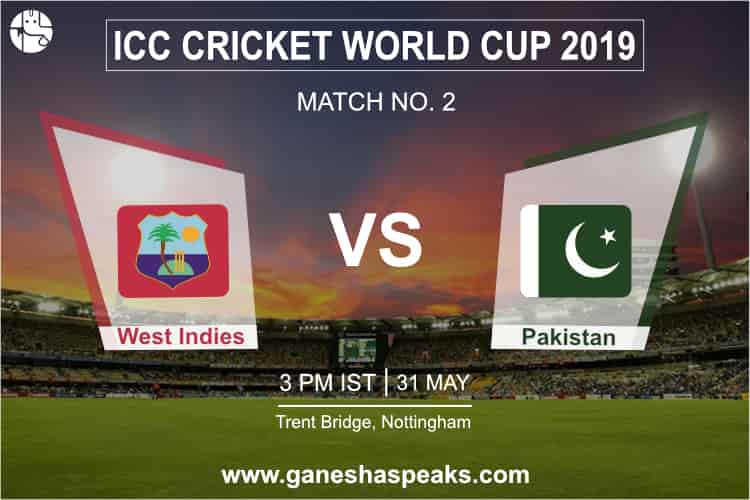 West Indies are all set to play against Pakistan on the 31st of May as part of the ICC Cricket World Cup 2019. The West Indies are 8th in the ODIs while Pakistan is on the 6th spot. In fact, Pakistan lost the last 4 ODIs they played. The West Indies have won the world cup twice so far. However, that was a long time ago, and the teams now have new players.

Both Andre Russell and Chris Gayle have only been playing the T20s for a while now. They even missed the tri-series in Ireland. Will that hamper their game in any way? They do have some exceptional players on the team, and they aren’t ones to back down from a fight. Whereas, the odds for Pakistan seem dicey based on the warm-up match they played against Afghanistan and lost. However, it may be too soon to judge. After all, it is only the second game of the tournament. We wonder who will win today match though. Who do you think will win between the West Indies and Pakistan?

Let’s find out what Ganesha has to say about the game!

As per Ganesha’s readings, the team to win the toss will be Pakistan. Who do you think will win this match though? Who will outplay the other?

According to Ganesha, the winner of the second match of the ICC World Cup 2019 will be the West Indies.