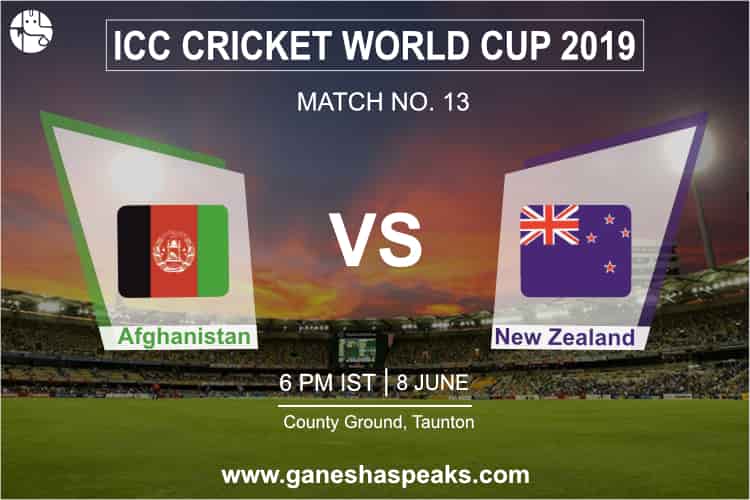 Afghanistan vs New Zealand Prediction: Who Will Win AFG vs NZ Cricket Match?

New Zealand will play against Afghanistan in the 13th match of the ICC World Cup 2019. Afghanistan has been playing well, but they’ve lost both the games they’ve played. Their defeat against the Sri Lankans was a little disappointing since they seemed to be in a stronger position. They even managed to restrict their opponents from making runs. However, the Afghans struggled to make runs during their innings.

Get Who Will Win 2019 Cricket World Cup Astrology by Our Expert Astrologer.

The Afghans are going to be facing the mighty black caps, who have been playing exceptionally well so far and seem very determined to take home the victory. However, from whatever we’ve seen, Afghanistan does not give up all that easily. However, the fact that New Zealand is a stronger team cannot be denied. The black caps proved their mettle yet again when they won against Bangladesh. Afghanistan’s batting order is one reason to worry while New Zealand has a more balanced team on that front. They have strong bowlers and batsmen.

Moreover, New Zealand is also in top form at the moment. They have everything it takes to win a championship as prestigious as the ICC World Cup. The match will be held at the County Ground in Taunton.Luck will also play a significant role, and we wonder who will win the 13th match of the ICC World Cup 2019. Who do you think will win the match between Afghanistan and New Zealand?

According to Ganesha, the winner of the 13th match of the ICC World Cup 2019 will be New Zealand.