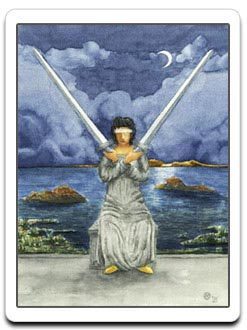 The “Two of the Swords” is about the barriers that we create between ourselves and others. We block emotions internally, and refuse to experience them. We avoid looking at the truth and claim that all is all right. One way we think, but the other one we feel. In multiple ways, we divide and try to keep them even if we know that they have to be resolved.

The choices are represented by the “Two of Swords”. As per reading “Two of Swords” highlights how difficult it is for us to make decisions intellectually. Although we maintain our outward stability, we usually face life’s present situation and anticipated difficulties, when there is nothing. There’s evidence that intuition will assist us in relaxing and accepting our intuition’s hidden symptoms. Patience and faith in the abstract will pay off in the form of favourable results.

The Two of Swords reflects our confusion when faced with difficult choices. On the “Two of Swords card”, the seated woman is blindfolded and carries a sword in each hand. In the context, a sea is surrounded by hills and rocks that serve as obstacles to boats and ships, slowing movement and stopping action. The blindfolded woman in the card represents a condition in which she is unable to see both the problem and the solution clearly. The swords in each of her hands suggest that she has two choices, each of which is mutually exclusive and leads in a different direction. It may also indicate a bottleneck, assuming that the problem should be solved by logic and reason. The Moon, which is on the right side of the card, could reflect the woman’s inability to make a decision by manipulation and misunderstanding.

When the “two swords” appear inside the analyzing, there may be a false impression. There appears to be no stop to the rivalry between the two opposing factions. Even as you were traveling alongside the trail, you did not know what to do with yourself, and now you are trapped inside. This example will keep, for all time without every body or each person being worried. You return to a crossroads and you have to determine if you may assist one Side or the other. Each looks unattractive, which in addition complicates the decision. However, once you’ve overcome this major barrier, you won’t be able to keep up.

In Tarot Reading, the “Two Swords” “Direct” are often associated with agreement and cooperation. Emphasizes the importance of maintaining the balance of healthy relationships. You may find yourself stuck in a struggle to keep things current, be it business, friendship, or romance. Depending on your job, you may find yourself in a limbo, waiting for a decision from the other party. Be patient and avoid pressuring others to make bad decisions.

The sense of the Two of Swords can be interpreted as a warning message. Like the woman on the card, you could keep the blindfold on and hope that the problem could go away on its own. Stop avoiding issues because they will not go away if you ignore them.

If you are single, it can be difficult to progress in your romantic life. The “Upright Two of Swords’ ‘,in love, points out to be stuck in the middle of a decision. Possibilities may occur where you have to choose one person out of two. Also you would like to discuss love and other aspects of life.Your choices seem to be equally appealing, and instead of constantly engaging in life decisions or you might be trying to avoid making one decision. Make sure the society doesn’t make your decision for you. If you are in a relationship, here something could be blocking you and your partner from addressing your issues.In tarot love, The “Upright Two of Swords” also reflects a bottleneck. Problems should not be dismissed, rather, they should be addressed thoroughly in order to reach an agreement.

The “Upright Two of Swords” in a career Tarot reading means that you might be stuck in the middle of a workplace dispute. It may be possible that you will  be asked to choose between two colleagues who hold different viewpoints. You don’t want to seem disloyal to any of them, but this will be complicated and uncomfortable for you. It may also indicate that you’re stuck between two career paths or employment. This Minor Arcana card may also signify ignorance or an inability to see the full picture of a situation. So be careful that you do not have all of the details and that you will need additional knowledge before making an informed decision. If you are having trouble deciding what to do next, try gathering more information and evaluate the benefits and disadvantages of each choice.

This card shows that you are in doubt about your financial condition and that it is easier for you to stop looking at your accounts entirely. If you take the time to look around, you may find that you have to make some difficult decisions. Perhaps you desired both a new designer dress and a new laptop, but a closer examination of your bank account reveals that you can only afford one at this time. Whatever position you’re in, make sure you’re looking at it logically and wisely.

A historical conflict is represented by the “Reversed Two of Swords” tarot reading, with two opposing sides struggling it out. This war could be a reflection of something internal or external, and you are caught in the middle, forced to choose one. You can become puzzled, frustrated by the pressure, and unable to make a decision because neither party seems to be particularly friendly to work with.

When you do make a choice, it will be between two undesirable outcomes. Please don’t worry, the most important thing here is to make a decision; then after, you will  be able to deal with whatever consequences arise.

With the “Reversed Two of Swords” his tarot below the idea of love, tells us that, there isn’t usually the right preference.In case you are single and you are trying to choose among the two companions, it can appear that neither of them is proper for you.

If you are married, you have to choose between your partner and your life. You will be more frustrated and more confused than before. This card means making difficult decisions, no matter where you are in your romance. in order to reach a conclusion, you are more likely to come out as stressed, leading to other issues. You will be pressured to find out if you are wrong. You may feel less stressed if you make a decision now and face the consequences later. So take a look at your natural look.

The “Reversed Two of Sword” indicates that the conflicts you have been having at work have grown worse, and they are causing you a lot of stress. When you are caught between two rival colleagues, it seems that no matter what you do, you will end up in heated water, and that there are no good options.Alternatively, you could be in charge of major decisions at work; you could be in charge of tasks or deciding between two occupations. These decisions cause a lot of anxiety because they seem to be final. You have probably done a lot of research, but instead of being of assistance, you are now struggling with information overload, and things might be more unclear than ever.

You are now practising the art of coping with your financial condition, no matter how complicated it might be, according to “Reversed of Two Swords”. It is much easier to make good choices if you have a good understanding of the subject. This card, on the other hand, could mean that the financial data you’re trying to read hasn’t been completely processed. Instead of assisting you, it seems to be difficult. Rather than allowing your feelings to control you, take them seriously. Focus on one subject and one detail at a time per week. It does not take you long to find out what’s going on.

Two of Swords Tarot represents a delay or a fractured support. However, it also helps people to achieve mental peace by settling disputes by seeing both sides of the problem. As a result, the Two of Swords does not provide a definite yes or no response. You should think of the result as “maybe.”