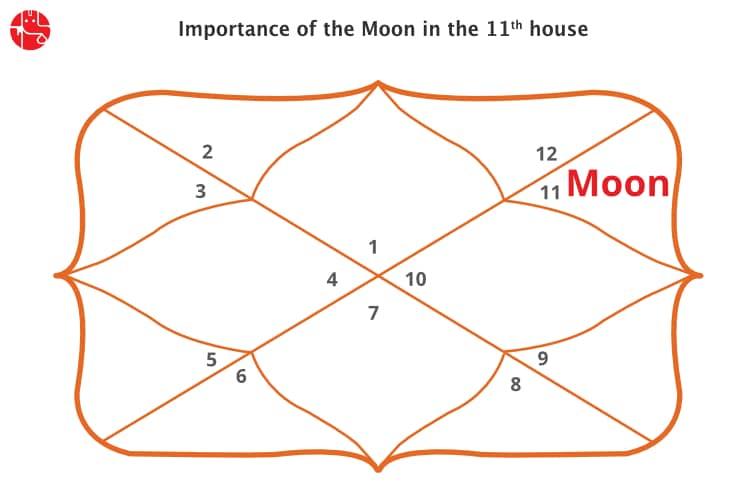 The 11th house stands for friends, associations, hopes and wishes, and also the financial situation of the employer and so on. And when the benefic celestial body Moon resides in the 11th house, it creates better prospects in the before mentioned areas. Thus, the placement of the Moon in 11th house points to an emotional need for a sense of belongingness, a want of support from friends and groups whom you know and are close to. Well, the natives of Moon in 10th house may face difficulties and challenges in life. But there is a strong likelihood that the natives of Moon in eleventh house will be able to manage their problems with help and aid from their family, relatives, friends and well-wishers. So, they bank on networking and togetherness.

The areas affected due to Moon in the 11th House:

The areas affected due to Moon in the 11th House may be filled with a lot many dreams, wishes and hopes for the future. Many of these desires are good desires, with no ill towards others and which seek only glory and grandeur.

The natives of Moon in the eleventh House will get a lot of emotional satisfaction by their involvement in groups, clubs, social organisations, community activities and a network of close friends, who will assist and help them. They will form a well-knit network with the people who share some ideals or beliefs with them. In other words, these natives are highly socially integrated. The natives will need people outside their family to relate or belong to.

Thus, the natives of Moon in 11th House in horoscope cherish heights in profession and life. They try to reach these heights in cooperation with others. They do compete with only a selected few people. They get along well with most of the people around them. They can be called more of peoples’ person.

Are you curious to know something about your relationship with people? Avail the Relationships Ask Question: Detailed Advice report.

The natives of Moon in 11th house in the birth chart may face lot many instabilities in life. It may even be a reflection of their inner emotional unrest. The ups and downs of life which the people around you will face will disturb them as well. They have dreams but it is not sure whether they will be able to sustain their dreams for long as they are prone to mood fluctuations. They will have a hard time discovering their goals and work on them to reach the destination where they wish to reach. Their mental restlessness is the main culprit for the same.

If being people-friendly can make them go places, the distortions in their minds can defeat them badly. So, they need to be careful in this regard. There is a need to be somewhat neutral, not to get influenced by the external surroundings unduly. Only, then they will rise high and shine bright.

Will you rise in career? Buy the Career Ask A Question Report and get your query answered.

So the natives of Moon in 11th house are good at bonding, gelling and a sense of togetherness. And they can make good use of their social connectivity in order to accomplish their much-cherished goals. However, the problem happens when their emotionality becomes a weakness rather than a strength. If their positivity gets converted into a negative state of mind, it can ruin much of their strengths. So, they have to be careful. In order to succeed in life, they should manage their negativity and boost their positivity.

Also, read about Moon in 7th House, which caters to marriage.