Comprehend your Kundli with houses and planets 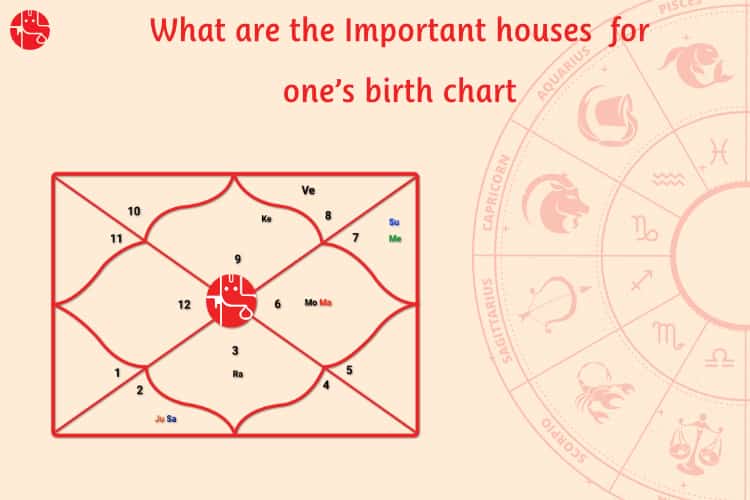 As the two arms of the clock revolve around the twelve numbers, signifying time; similarly, the control of our lives also revolves around the Twelve Houses in our Birth Chart. According to astrology, these houses or Bhavas signify the twelve areas of an individual's life. These 12 astrological houses have their ruling planet, relevance and also a zodiac sign associated with them. Aries marks the beginning of the twelve houses in astrology while Pisces marks the end of them. The beginning of each House is known as a cusp, and the 12 houses in birth chart  run East to West or clockwise direction.

Understand the basics of your Houses better

The first House, in the chart, is present where the Lagna or ascendant is placed. Moving clockwise, the sign which is south to the first is the second House.

The first, fifth and ninth houses form the Trikonas or trine houses or Lakshmi sthanas. These are the houses of prosperity and are often very powerful.

The first, fourth, seventh, and tenth houses form the quadrants or Kendras. These are equally powerful as Trikonas.

The Upachayas or the House of growth is formed by the third and 11th houses.

The Kama House includes the third, seventh, and 11th Houses while the Moksh House consists of the fourth, eight and 12th houses.

The sixth, eighth, and 12th houses are infamous for being the Bad Houses.

Deeper Understanding of the Significance of the 12 Houses in Janampatri

Each House is ruled by a separate Planet and has its own Zodiac sign.

Aries is considered the first House in one's birth chart since it is the first sign in the zodiac wheel. By evaluating the first House, the physical features and aspects of one’s body can be analyzed. It is ruled by Aries & Mars.

The second House provides information about an individual’s financial status and its growth. It is ruled by Taurus & Venus.

The third House is known as Parakram House, which is known to depict the creative and artistic expertise of its native. It also reveals the relationship between the siblings and is governed by Gemini & Mercury.

The fourth House provides knowledge about the possession of a car, house or other materialistic requirements. It also helps to analyze the individual’s mother’s health. It is ruled by Cancer & The Moon.

The fifth House reveals the relationship status and about the offsprings. It also throws light on the education of the individual and is ruled by Leo and the Sun.

The sixth House reveals the diseases and physical problems. It also informs about the potential of the competitors. It is governed by Virgo and Mercury.

The seventh House reveals about marriage and one’s relationship with spouse. Problems related to genitals can also be analyzed with this house. It is ruled by Libra and Venus.

The eighth House of Kundli is considered inferior as it informs about the death of native. It also tells about the overseas trips and is ruled by Scorpio and Pluto.

The ninth house can be a deciding factor for your fate and is governed by Sagittarius and Jupiter.

Tenth House informs about the job opportunities and the placement of the native. It will also tell about the risks in case an individual wants to own a business. It is ruled by Capricorn and Saturn.

The 11th House provides knowledge about the profit one can have from work taken up. It is ruled by Aquarius & Uranus.

The twelfth House keeps track of your expenses. The increase or decrease in the expenditure depends upon the planets in the 12th House, which is ruled by Pisces & Neptune.

Astrology is a practice that can help in self-analysis. The birth chart is circular with 12 houses, and it makes up the zodiac wheel. The journey from first House to the twelfth House covers all the aspects related to body, wealth, happiness, childhood, diseases, marriage, death, fortune, karmic, profit and expenditures. The houses are a brief description of the native’s journey in life.