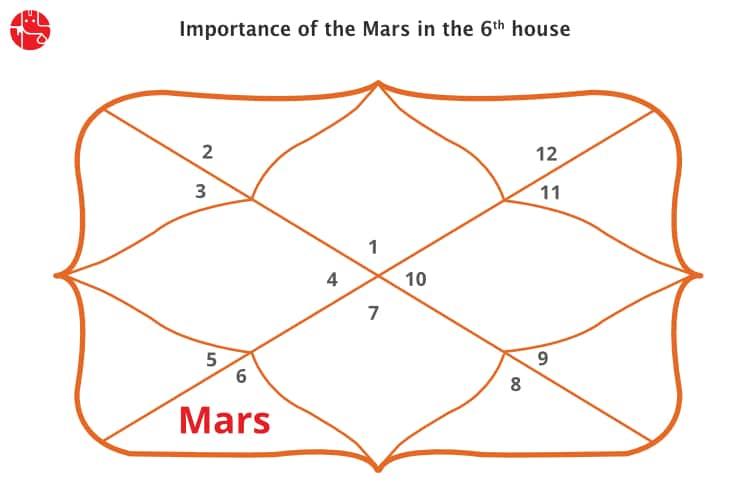 The planet Mars is about violence and warfare. It is also to do with anger, short temper, and ferocity. It is a malefic planet that can make the natives quite aggressive and fervent. And when Mars enters the 6th house, the planet is likely to impact the characteristics of the 6th house in a negative manner. And the 6th house stands for the activities that go on at the workplace, certain illnesses and so on. So, when Mars resides in the 6th house, the natives are likely to be very hard working. Also, the natives may be a very demanding employer or boss, who may expect very high standards from their juniors. If their pre-occupation with success becomes ruthless and they see nothing but ambition, they may face serious problems in life. Only a strong mind that knows how to balance the different pursuits can make things better.

The areas affected due to Mars in the 6th House:

It is seen in the Mars in 6th house Vedic astrology that the natives of Mars in the 6th house will work very hard, sometimes so much that they get thoroughly exhausted. They put a lot of energy and effort into their work. They will do best if they work for themselves. They will also do well working for others but then they should be given considerable autonomy. They have their own way of working and may not like any intrusion from others. They can become highly skilled at organizing and re-organizing, sorting, classifying, and analyzing.

Will your skills help you in the profession? Avail the Career Ask A Question Report to get the answer.

If the natives of Mars in the 6th house are able to reign in their drawbacks, they can do wonders. As per Mars in sixth house astrology, the natives should try to be less demanding on the people around them, friends, and family included. Their ideas for perfection do not often gel with other people’s ideas. They should compromise sometimes to get things done. But that doesn’t mean they have to compromise on the final result. It simply means there are different ways of achieving the same goal. They should keep an open mind when others offer inputs. Virgo being their ruling star sign, they can’t stop being a perfectionist.

The natives of Mars in the 6th house may easily become impatient if other members of the team are not working as fast as they do. The natives of Moon in the 6th house can also become easily disturbed with delays and postponement. They become riled up or defensive if someone criticizes or intrudes into the work which they are doing.

Will there be intrusions in your life in the year 2020? Buy the 2020 Detailed Yearly Report and know the answer.

The natives of Mars in the sixth house desperately want success. They can feel identified with any project, so they always try to do their best. They may become frustrated if things don’t go their way. They expect their workers to share the same enthusiasm and put forth the same effort which the natives expend but will demand the lion’s share of the credit. It will do these natives a lot more good if they respect their followers by sharing with them the rewards of their labor. A demanding employer can also be a generous friend. The problems of Mars in the 6th house can be resolved by appropriate remedies.

It’s good to be professional. But then it should not come at the cost of basic humanity. It’s required for an employer or boss to get the things done from their employees. But completely ignoring the self-respect of others may become dangerous and make the natives unpopular. So, there is to be a proper balance, of progress and humanity and of work and life.