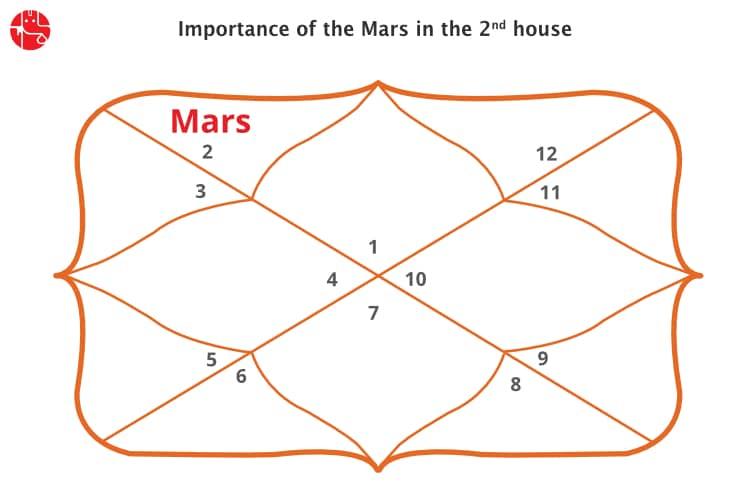 The planet Mars represents ferocity and aggression. It stands for heat, redness, energy, and dynamism. Mars is considered a malefic planet in Vedic Astrology, which signifies the violent aspect of human personality, whether mental, verbal or behavioural. As for the 2nd house in Vedic Astrology, it denotes speech, money, family. Well, the presence of Mars in the 2nd house makes the person a risk-taker. The natives who have Mars in the 2nd house are impulsive, and they can do well in the speculative areas.

The areas affected due to Mars in the 2nd House:

The natives of Mars in the 2nd house are likely to be hard-working. Besides, as they are reckless, so they may also be impulsive. They are bubbling with energy which they can direct towards making money and accumulating wealth and possessions. They strive for a stable financial situation, always aiming to keep a cash reserve as a buffer against future unpredictabilities and uncertainties. So, they work hard and are cautious and careful in spending money, to avoid a financial crisis. Get your financial problem addressed. Buy the Remedial Solution for Wealth report.

The natives who have Mars placed in 2nd house prefer to have their own business and actively create their money. The natives of Mars in the 2nd house do not like to work for someone else who will keep the biggest part of the gains for themselves. At the same time, they should not make earning money the sole purpose of their life. They should also try to develop their talents and creativity for a more fulfilling life. Making money is indeed an important aspect of life, but the world doesn’t end there.

When Mars is placed in the 2nd house, the natives are likely to be sensitive. They may get flared up over small issues and pick up quarrels with others. Besides, the natives may have difficulties in pronouncing some words. If Mars is afflicted, then the natives even suffer from speech-related issues. They may also be harsh in verbal communication, which may embitter their relationship with others. Are you facing relationship issues? Buy the Remedial Solutions for Personal Issues report and get the problem sorted.

They are hard workers; their profession is a battlefield where they want to be victorious by any means. The financial gains which they make are the rewards that they get from the battlefield. Like in most of the wars, the spoils gained are not to be shared with others even if they fought together; problems can appear between them and co-workers in sharing the gains. The native’s money is spent rather quickly; Mars in the 2nd house creates a person that usually buys things hastily.

The presence of Mars in the 2nd house gives the push to earn money and acquire wealth. But when it comes to spending money, they are very miserly. Another characteristic of Mars in Second house natives is that they befriend evil-minded people easily, because of which they suffer as they start indulging into unlawful and unrighteous activities.

The natives of Mars in the Second house can do well in speculative areas like stock market trading. They can also be a good human being and do full justice to their relationships. However, one factor which keeps them down is their bad temper. They can maximize their success by being more restrained in their behavior and being less attached to money.