The King of Swords & Its Meaning in Tarot Reading 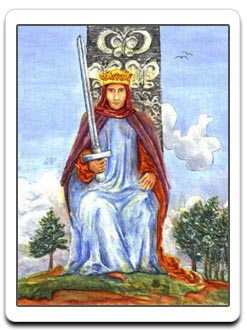 The tarot card “King of Swords” is a Latin card. Tarot card readers refer to it as the “Royal Arcana”..

The king of swords possesses intelligence, analysis, expressiveness, equality, and ethics, along with other attributes. In this situation, the king is convincing and receptive. His personality is a combination of the Swords’ cheerful air energy and the King’s outer emphasis. He is a thoughtful individual who is capable of dealing with a wide range of statistics. He deals with all situations equally and honestly, and makes decisions based on justice. He is a man with high moral ideals and honesty who wants everyone to be a part of the process as well. With the same skill, he will come up with ideas and present them.

The King of Swords will help you progress by reducing confusion and clarifying it. Altogether, the King can deal with any unforeseen situation.

The “King” or the “Emperor” portrayed on the “King of Swords:” Tarot card, tell about his Personality. This Emperor possesses a combination of both the power of good spirit and the Strategic approach of the Lord. He holds a qualitatively amount of wisdom, through which he could quickly analyse any issues and could clearly come up with the ideas to solve them, due to this approach he is trustful for others and thus they feel relaxed and confident.

When there is a question of Judgment, he handles the situation with sincerity and equality by keeping his emotions or feelings. He is honest and clear with his decisions, which are balanced and safe, where there is no partiality. He encourages his inner circle to be neutral thus they as an administrator could set the highest moral standard.

In a Tarot reading when you come across “Upright King of Swords”, it means you have to be neutral, same as the “king’s” personality. Whatever the situation arises you should stick on facts to determine reality. As you are most accomplished, you need to examine problems deeply with your intelligence which will provide a clear picture of the situation and problems would be solved easily with better results.

The “Upright King of Swords”, also suggests you to take advice from your staff or your seniors who are totally experienced with the situation or have faced those in the past. Discuss with them when you need to take judgements. Some of the cases may be such where you have to keep yourself in control or you need to avoid anger. While making any decision keep your emotions out, think logically and be honest with yourself and about your outcomes because your settlement could affect others in a positive or negative sense. Due to which some persons may admire you or some may hate you, this could be all because of their emotions but lastly all will respect you.

As “King” has his personal life too, so with his responsibilities he is loyal and faithful towards his loved ones. This “King of Swords” Royal Arcana card recommends you to use your intelligence while dealing with your social and corporate responsibility and also enjoy happy moments with your family and friends.

As love and feelings are concerned The “King” does have heart. He is also a person with emotions, but he keeps himself calm, collected and positive. Here upright “King of Swords”, shows respect of the kings towards his relationship both close and with society. He has high morals for elders as well as support for young ones.

Thus, this card suggests you to maintain high standards when it comes to your potential relationship and be genuine with your partner.

The “Upright King of Swords” suggests you to be a perfectionist. As advised by “king” stick towards your attitudes, be calm and find better ways to complete your daily task. Sometimes, the levels of difficulties would be high where you may not be able keep your temper, the environment could also be strict, time will be running out, thus in such situation if required talk to your seniors or colleges on the matter, so you could find a good solution to your problem or easy way to settle it.

If your expectations are high, practice the high values as described by the “king of Swords” and you will be able to see quick progress in your career.

The “Upright King of Swords” inspires you to become financially committed for whatever you desire. It is true that you have faced many challenges to build yourself financially strong, where you might have lot of savings and valuable assets or some property, but when you find big deals examine the schemes critically and thoroughly wherever needed approach help of best finance advisor, only then invest your money or savings which could result you in achieving your financial goals.

The “King of Swords”, when “reversed”, represents dictatorial, violent, and manipulative conduct. It could indicate that one’s intellectual courage, motivation, or authority have been exploited. This is an example of misinformation and bribery being used to achieve selfish objectives. The reversal meaning of the King of Swords may also indicate that you’re showing off your intelligence by using big words to discuss ordinary topics. Another interpretation is that you are a weak leader, especially when you have anger issues and desires.

When the “King of Swords” is “reversed”, he or she will use their keen intelligence to benefit themselves. The wisdom and morals that directed the “king’s” act in the upright role are no longer present, and his actions can now be incredibly selfish and even violent. Thus an individual often allows their emotions to run wild, easily shifting from cold and distant to feelings of anger.

The “reversed King of Swords” in tarot love sense can indicate that you are displaying certain attributes in your relationships as characteristics or qualities. You may need to show your partner more patience and forgiveness, or you risk losing them. This card may also indicate a lack of high expectations in future relationships; avoid being washed away by emotions and instead use facts to determine if anyone is a suitable match for you.

Facing troubles with disagreements in your love life? Bring the compatibility back with yourFree Love Horoscope.

The “Reversed King of Swords” indicates that at this moment your workplace is not pleasant. Your boss is unbearable and aggressive and he or she is misusing his or her power for a variety of reasons or for various purposes. Due to this environment the whole workplace looks annoyed or irritated.

If this is not a situation at your workplace, then you will need to work on yourself. You need to be cool and evaluate your behavior towards others, you need to behave normal and express yourself with good manners. If in case you lose your self-control then the results of it could be not in your way, you will feel depressed with lack of self-confidence.

You may not have been really careful about your finances recently, and you have overspent, bought a lot of useless products, or invested in things that aren’t paying off. This may make you feel desperate, but wait for the chance to make up for your losses by being selfish or cunning.

Also The “King of Swords reversed” in a financial Tarot spread may signify a lack of control or self-discipline in your financial management, so make sure you are in control of them and behaving with honesty in all financial matters.

The King of Swords is a powerful, capable decision-maker with a sharp mind and a natural leadership ability. “King” also reflects upcoming major decisions and the need to assert power and establish limits while remaining committed to the objectives. This card, at best, does not provide a straightforward response. There is no clear answer, maybe considered at best.

Each of the four suits of the Minor Arcana is divided further. Four Court Cards are extracted from each Minor Arcana suit, and they are classified under each category – The King, Queen, Knight and Page, signifying their specific traits. This makes the total Court Cards as 16. The King is creative, inspiring and bold, and wants to create a lasting impact on the world. The Queen is attractive, energetic, cheerful and self-assured; she does not impose, but subtly influences circumstances. The Knights may be termed as extremists, they express their qualities to the utmost limit. For instance, if they are cautious, they will be cautious to a fault, weighing all the pros and cons meticulously before taking a decision. The Page motivates us to enjoy the thrill of mental and even financial challenges.