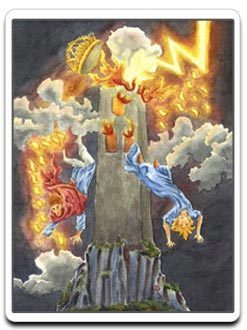 What It Means To Have The Tower Tarot Card (Upright)

Whereas the Death card is generally the one that people are afraid of, The Tower is the one that you should prepare yourself for out of the entire deck. Chaos and destruction are represented by the Tower Tarot card. It is the card of sudden upheaval and abrupt transition in the Major Arcana. This transition is always frightening, life-altering, and inevitable. A negative Tower occurrence can feel like a bomb exploding in your life. You have no idea how you will succeed, but you will, and you will later realise that while it was a harrowing experience that you would not wish on your worst enemy, it has shaped you into the person you are today. One of the positive aspects of The Tower is that the damage it brings is typically aimed at something based on false foundations or unrealistic hopes and dreams. On the plus hand, the devastation brought about by The Tower is often accompanied by rebirth and development. ​

If you’re in a relationship, The Tower can be a bad omen, representing break-ups or divorce in a love Tarot reading. It may also portray you, your girlfriend, or both of you, going through a challenging or stressful experience that tests your relationship to its limits. You must try and be there for each other and maintain open and truthful contact if you want your relationship to survive the Tower event. The Tower predicts that if your relationship survives this upheaval, it will change dramatically.

The Tower can suggest a lack of job protection in a professional context. It may be a sign of a layoff or work loss. However, it may also mean a significant shift in your current position, which will cause you stress and may be challenging but will eventually lead to a better position or greater protection. When it comes to capital, The Tower advises you to be cautious. The Tower can reflect bankruptcy in its most extreme form. Investing in high-risk areas should be avoided. If you haven’t put money away for a rainy day, you can do so as soon as possible.​

The Tower may reflect a sudden illness or injury in a health sense, so keep your safety and well-being in mind. It may signify a traumatic pregnancy, miscarriage, abortion, or stillbirth when used in conjunction with pregnancy cards. The Tower can also suggest mental health issues, which is understandable given how intensely emotional Tower incidents can be. Although the health problems represented by The Tower are not simple, they are normally followed by a period of renewal. If health issues are pushing you to make changes in your life, try to go with the flow because these changes may eventually be beneficial to you.

Imagine building a house that you believed was well-built and would provide you with protection for the rest of your life. The Tower will be a massive storm that devastates your home, damaging anything you thought was safe and revealing that your foundations were not as strong as you thought. Although you will always feel sorrow, disappointment, grief, rage, and confusion as a result of this terrible turn of events, you will have the opportunity to rebuild a new, stronger home on more stable foundations. In a spiritual sense, the Tower reflects the abolition of old values.

What It Means To Have The Tower Tarot Card (Reversed)

When the Tower Tarot card is flipped, it can indicate that you narrowly escaped catastrophe. In order to keep the lesson from repeating itself, you must learn from it. It can also mean putting off the inevitable. If you’ve been avoiding a major change because you’re afraid of the pain or heartache it will bring, this Major Arcana card in reversed position may be telling you that it’s time to face it. ​

In a professional sense, The Tower reversed may mean that you are managing to keep your job despite adversity. This may simply be a symbol that you’ve managed to stop losing your employment. However, if you’re avoiding what you perceive to be a career disaster and instead of feeling relieved, you’re disappointed or dissatisfied, consider whether this result is really the best thing for you. Getting out of our comfort zones can also motivate us to do incredible things we might never have attempted otherwise.

The Tower reversed in a health sense can mean that you are avoiding an illness or a warning sign of an illness in the hopes that it will go away. To offer yourself the best chance of survival, you must face this head-on. It may also mean that a health scare turns out to be nothing serious, and you’ve avoided catastrophe as a result. In any case, hiding your head in the sand will not help you with your health problems.

The Tower reversed in a theological sense suggests that you may have realised the old values you once held dear are now proving to be false, but you are avoiding letting go of them. Perhaps you believe that if you don’t believe in such things, you won’t know what to believe in. Perhaps you’re afraid of retaliation from those who still hold those convictions and are unable to challenge the status quo. To step forward and follow your true spiritual path, you must face the truth and let go of what isn’t working for you. It will be difficult, but it will be worthwhile in the end.