What Does The Death Tarot Card Depict? 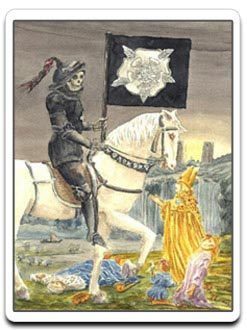 As per what is shown in the death tarot card, it is represented by a living skeleton as that is the only thing left when people die. It is seen riding an attractive white horse and death is shown holding a black flag with a white pattern inside. As we all know that death is invincible and indestructible, it is shown wearing an armor. The white horse that he is sitting on denotes purity and beneath him, there are various sections and classes of people who are lying down in the dirt. The card, especially, shows a king and a pauper lying on the dirt signifying that death does not consider any differences like caste, race, gender, etc in the process.

The death tarot card is one of the most powerful and feared tarot cards which is why it is misinterpreted a lot of times. One may think that this card is surely affiliated with death however, it is considered to be one of the most optimistic ones out of all the combinations of tarot cards.

Well,the interpretation of the upright death card is very interesting as it claims to end the ongoing phase of a person’s life to start a new one. Thus, it is all about ending the current phase and starting a new chapter to explore more in life, to end the older process and start a new one with all the zest and energy.

There are other interpretations of the death tarot card as well. For example, the card also means that that you may be going through a major change or transformation in life to enter a new one. This can also turn out to be a difficult phase as change is followed by fear in many cases. But you have to take this in a more positive way to understand the deeper meaning behind it. Another connotation is that you may have to discontinue all your bad habits to inculcate good ones to make a difference Therefore, the death card is all about knowing more and teaching yourself new things in life. It is about the end of the cycle, new beginnings, modifications, and metamorphosis.

The reverse meaning of the death card is also associated with changes but the ones that you may have been resisting. There are many changes that one resists to undergo as it is filled with risks and devotion that makes you feel uncomfortable. Things that are in the past but you are not able to break it which creates a lot of disturbance for you. While limiting yourself and not welcoming change can hamper your growth in the future, it can also make you stagnant in life which is close to death.

This is the best time to witness the changes in life rather than resisting them for this may assist you in driving conclusions while deciphering this process. Fear of changes in situations or circumstances is one of the major factors that aid in stopping your growth on a personal as well as your professional front. Even though there are uncertainties that one may not know of, it is also essential to believe in yourself and the steps that you take to make your progress. It is crucial to understand that once you overcome your fears, changes will happen smoothly. Summarily, the reverse death tarot card is linked with fear of change, stagnation and holding on. You will be triumphant if you welcome and adapt to the changes over time.

The death card tarot and astrology are associated with the eighth astrological zodiac sign Scorpio who is dark, deep and complex. This card is affiliated with the water element as well.

Below are the various aspects of life being influenced by the Death tarot card:

In terms of love and relationship, the death tarot card denotes that your relationship may be going through some ups and downs. To be more specific, your relationship may be going through the downhill and you may be holding onto it deliberately. Another reason can be that you are stuck somewhere with your old patterns and are not able to move from that stagnancy which is also resisting change. Thus, a sense of monotony may prevail in your love relationship. Obviously, death is all about not resisting change and if you do not evolve in the relationship then matters may get worse. While it is an extreme statement to make, the card may also signify the end of the relationship as there may be no juice left in it. So a breakup or a divorce may be on the way as per the interpretation.

On the other hand, the death card can also turn out to be a positive sign too, for change can come in any way. A new optimistic change, or engagement, or pregnancy, etc can be the underlying situations here. Hence, it is all about transformations and how to embrace and adapt to the changes happening in the relationship.

This card plays a big role as far as money and career are concerned. The death tarot card may indicate changes in your role or a job opportunity, in general. You may feel like changing your job but because it offers security, you may not be doing so. You may also feel like shifting to having your own business from being an employee but because of the financial security that the job offers, taking such a step may be a huge risk for you. But, eventually, you will have to make changes, no matter what the case is. Metamorphosis is inevitable and change is the only constant. So, considering this you may be required to take safe yet bold steps to benefit yourself.

Try taking these decisions consciously, or you may be forced to leave your job or accept a change, for that matter. Be more pragmatic, plan things accordingly and make your decisions as there can be optimistic outcomes to these actions as well.

The death card meaning with respect to health is not a physical death that you may await. Rather, it is again all about how you adapt to situations and circumstances. If you are feeling ill or unwell, then try to change something in your diet, lifestyle or just the way of thinking and the approach. But, you will have to understand that this change is temporary and things may not remain the same for a very long period. Keep your hopes high and try to welcome the ongoing transition.

So, remember no matter how bad this phase is, you will get over it if you work hard enough on yourself.

Effects of Mercury Retrograde in Aquarius & Capricorn on Your Zodiac Sign