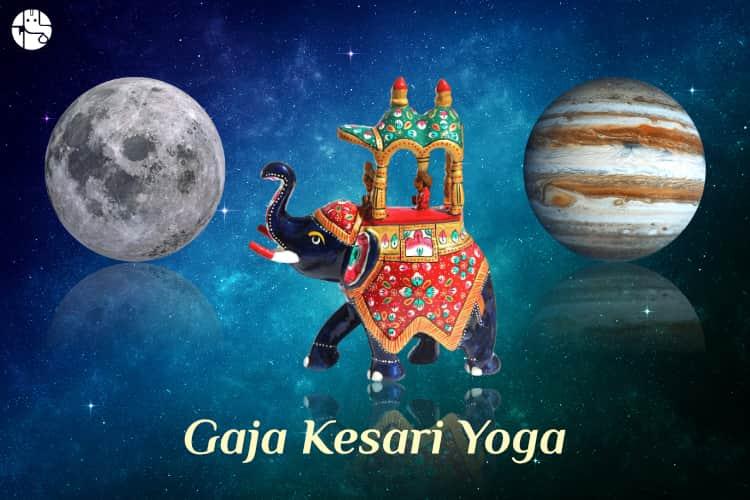 Gajakesari Yoga is known to be the most powerful and propitious yogas, known in Vedic astrology. This yoga is formed when a Kendra from the Moon is occupied by Jupiter. These are 1, 4, 7, 10th houses from the Moon.

Jupiter is known as the planet of great abundance. The planet often brings material wealth and spiritual wisdom. Also, known as Guru or Brihaspati, the planet stands for devotion, worship and is also stands for children and wealth. The moon, on the other hand, signifies kindness, joy, and prosperity. Yoga is formed when both come together and is promising when it is developed in the Kendra/Trine houses. Jupiter, by compulsion, has to be in the Kendra from the Moon for the yoga to form. If Jupiter is in the enemy house, then also the auspiciousness of the yoga is challenged.

Gajakesari Yoga is one of the most favorable yoga for a person caused by the planetary mingling of Jupiter and the Moon. It is believed that it brings about sharp intellectual abilities and immense prosperity in one’s life. The person with this yoga will be highly loved and respected by the people around him.

Read the Effects of Moon and Jupiter Conjunction in the 1st House.

The Gajkesari yoga is most effective when Jupiter does not have any malefic influences, or due to some retrogression. Is Jupiter placement in your birth-chart having malefic influence or in retrogression. Explore it now from your free Janam Kundali Analysis. All these conditions also apply to the Moon. So, basically, when both Jupiter and Moon are free from any kind of afflictions, Gajkesari gets its full force and brings about abundant wealth and fame to the native who has a clear yoga.

This yoga can appear in the horoscope of many natives and is dependent on planetary associations. It is definitely based on both the position and lordship of two planets, Jupiter and Moon. Also, a point of caution says that they should also be free from the effects of Rahuand Saturn.

How is Gajkesari Yoga formed in the Birth Chart of the Native?

There are certain conditions that have to be fulfilled for this Gajakesari yoga to be developed.

It is believed that yoga is Effective only in the Dasha or the Bhukti periods of the Moon and Jupiter. Also, during the antardasha periods of these planets and when the Dasha lords compliment both Jupiter and the Moon. If the latter conditions are not satisfied, there can be no elevation in the native.

The native will grow rich owing to his sincere work and the divine grace when the Jupiter, Mars, and Moon are in the Cancer sign for a native that comes from the Cancer zodiac. Also, the presence of Jupiter in the Sagittarius, Cancer, and Pisces, clearly depicts that the native will emerge rich via its wards.

It is because of this reason that the natives with a strong Jupiter often shine throughout their lives and are blessed with peace of mind, prosperity, wisdom, helping tendency, and also abundant happiness.

If we dig a bit deeper into Jupiter, we find that Punarvasu, Visakha, and Purvbhadrapada are the three constellations of Jupiter, while 2nd, 5th, and the 9th house contain Jupiter as Karaka. Mercury and Venus are considered rivals, while Sun, Moon, and Mars are seen as friendly or favorable planets. Another thing to note is that Rahu, Saturn, and even Ketu are completely neutral to Jupiter. It has been observed that Jupiter gets positive in the 4th House and in the 10th House. It is in the 1st house that it gets the much-needed directional strength.

We would also want to enumerate the time-periods in one’s life when this yoga is most-effective!

Unless you think of the welfare of others, the same benefits will not be able to flow to you. Your faith in the Almighty will play a major role, and He has always been the guiding light for all. Remember, there is no good period unless you get up and make it happen. Hard work still reigns supreme.

Now, let us discuss another vital aspect of the Gajakesari Yoga-Marriage

Gajakesari Yoga and Marriage of the Native

Vedic astrology believes that the 7th House of the Birth Chart is for marriage, and even the Gajakesari yoga operates in the 7th House. The effects of the same on this pious relation are highly favorable and propitious. The native is believed to reap marital bliss and will be blessed with a good wife coming from strong family background. Also, yoga can spell early marriage in the life of the native. The native can look forward to a great and successful married life. Explore Premium Janampatri to know whether you have this yoga in your horoscope and also know its favorable results in your life.

Gajakesari Yoga is thus highly auspicious for the native and spells a lot of abundance in the life of the native. Not only does it spell more intellectual abilities, blessed marital life, but also great material wealth. The native will be flushed continuously with increased opportunities to earn more money. The only underlying condition is that both Jupiter and Moon have to be in favorable aspects to each other.

To know more benefits of Yoga, Talk To An Astrologer Now!

Effects of Moon in different houses