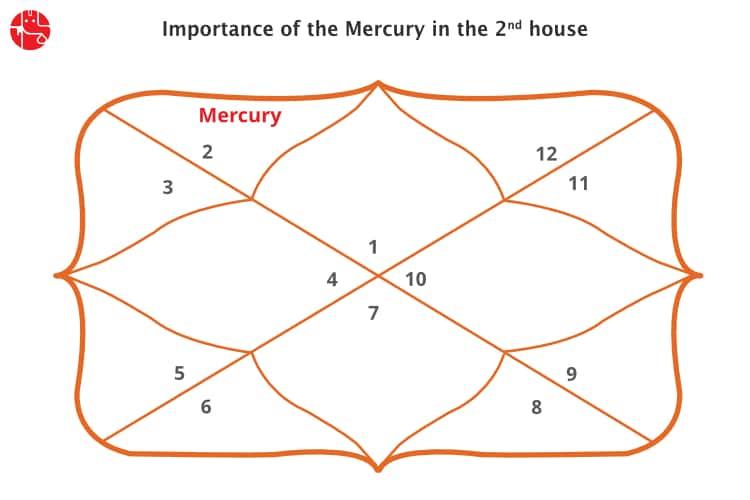 Mercury stands for intelligence, wisdom and communication. As for the 2nd house in Vedic astrology, it is about the areas like the speech, family, money and the right eye. When Mercury is placed in the second House, the natives are likely to have lots of wits, intelligence and knowledge. Well, the natives of Mercury in 2nd house may use their intellect to accumulate wealth. Also, these natives are likely to be very good speakers. The presence of Mercury in second house will make the natives more intelligent and also enhance their speaking skills.

The areas affected due to the Mercury in the 2nd House:

It is interesting to note that both Mercury and the 2nd House are about speech and self-expression. So these natives are sure to be good and intelligent speakers. Besides, the natives of Mercury in the 2nd house will be good with money management and they will use their finances quite effectively. The intelligence possessed by the natives of the 2nd house will be directed towards financial growth and development. Are you having any confusion on the financial front? Avail the Wealth Ask a Question report and get it sorted.

At the same time, traits like curiosity and thoughtfulness are governed by planet Mercury. These traits become all the more expressed when Mercury is present in the 2nd house.

Mercury is the ruler of that aspect of mind which can decide, differentiate, and reason, the faculty that controls the subconscious thoughts and conscious actions and power of discrimination. Its influence is strong. Controlling travel, finance, logic, and education, Mercury in 2nd house natives can go places if Mercury is positioned strongly in the horoscope. It can make them a nonsense wreck or sagaciously sensible as per Mercury in second house Vedic Astrology.

The natives of Mercury in the 2nd house are good at expressing their ideas through verbal as well as written communication. They usually fit in roles such as travel agent, writer, speaker, lecturer, teacher, finance manager, and so on. Such a person has strong values and family ties, but when Mercury is retrograde, the person becomes too rigid about their values and defends them at all costs. Their perspective of the world becomes too materialistic in that case.

The Mercury in 2nd house natives don’t like to be rushed into something and made to panic. They may be so stubborn that no one can push them into doing anything they don’t want to do. There may be situations when a quick decision may have to be made, and the natives of Mercury in the 2nd house may have a lot of difficulties figuring out what to do. What type of difficulties will you have in the year 2020? Access the 2020 Detailed Yearly Report and know your future.

The natives of Mercury in the 2nd house may have to learn that they can’t control everything, no matter how hard they try. Sometimes, they have to do things compulsorily. This means that they don’t always get their way, and that’s tough for them to comprehend.

Also, because of their logic and reasoning, they feel as if they know the best, but that may not be the case always. Life may throw serious challenges which may interfere with their plans. They should learn to be flexible or else they won’t be able to accomplish as much as they had hoped.

The natives of Mercury in the 2nd house are good at reasoning and money management. However, they may not like being pushed into doing things. Also, they may become arrogant owing to their intelligence and management skills, so they need to be very careful in this regard.

Effects of Mercury in Different Houses