Putin shall continue to function with an iron-fist, may not relent till ISIS is annihilated! 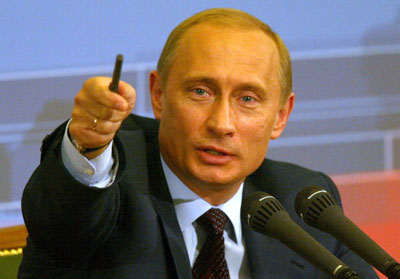 Speaking of strong and bold leaders, Putin makes for a solid example. The man, known to deal with issues in a tough and clinical manner, has decided to deal with the evil issue of ISIS/ISIL, in the conflict-prone regions of Iraq and Syria, with an iron-hand! His country's war-planes and battle-ships have been striking various ISIS territories. He is extensively in the news currently and is being seen as a very impactful leader, who means serious business! The Russian offensive is said to have caused such damage to the barbaric, inhuman group, which is now rattling the wits out of the militants, and now most of them are fleeing away to save their lives! What do the planets reflect about such a strong leader? What lies ahead for the leader of one of the biggest super-powers of the world? Read on to find out!
Vladimir Putin – President, RUSSIA
Date of Birth :-  07th October , 1952
Time of Birth :-  09.30 Hrs
Place of Birth :-  St. Petesburg, Russia
NATAL CHART
1) Which planets confer such power on Putin?
The Highlights:
2) How will his current endeavours turn out to be?
Important astrological observations:
Astrological Predictions :-
Complete Go-ahead being given by Jupiter:
Even Otherwise, Is Military Activity Indicated?
Major-Period of Yogakaraka Saturn: Ensuring Poise and Control
Boldness and Confidence – the constant attributes?
3) There is one section of the media, human rights bodies and even the political bodies aligned with the USA which have been voicing their concern over the actions being taken by the Russian President, despite his sincere intention of wiping out terror? SO, are there some problems or opposition which may hamper his approach or activities?
Important astrological observations:
Astrological Predictions :-
Rahu creating troubles slyly?
4) What does the path ahead have in store for him?
Important astrological observations:
Astrological Predictions :-
Ganesha wishes a great time ahead to Vladimir Putin - President, RUSSIA.
With Ganesha's Grace,
Rantidev A. Upadhyay and Aaditya Sain
The GaneshaSpeaks.com Team
Share