Remedies To Ward Off Bad Influence Of Weak Planets In Horoscope

Remedies To Ward Off Bad Influence Of Weak Planets In Horoscope 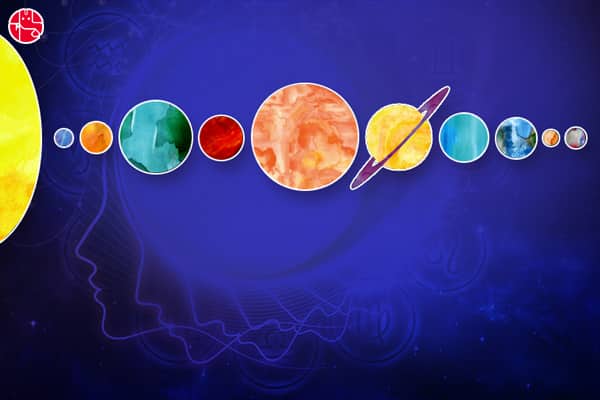 The Important Role Of Planets In Determining Human Destiny

As per the ancient science of Astrology, celestial bodies moving in the cosmos exert a significant influence on human nature and destiny. In fact, planets, by their movements not just influence the human beings but even have an impact on beasts, birds, vegetation and on every living being or non-living thing in a positive or negative manner. The planets move about in the heaven and create different positions from time to time (like they get direct or get retrograde), which in turn influence life and existence on Earth.
When the auspicious planets are in combination with positive planetary positions, they bring about happy developments in the lives of the natives. On the other hand, if planets are in an unfavourable position, the natives will have to face difficult situations.
So, for the welfare of the human species, the wise sages and seers (Rishis and  Munis) had, through the study of astrology, devised means and methods to ward off the evil impact of different planets.  The intention of these methods was the elimination of human suffering and betterment of peoples' living conditions.

The Vedic scriptures have mentioned various methods like wearing of astrological gemstones, reciting of Mantras ( a special combination of words which can invoke invisible powers in the Universe), etc to strengthen the good planets and quieten the malefic ones. Besides, the ancient scriptures have provided detailed information about the need and logic for quietening the malefic planets. This has been done to ensure that the natives themselves get the first-hand hold over the steps which they need to take control over their destiny. People can make use of these methods and make a positive difference to their life.
Here, we are going to suggest you some easy and practical tips which can help you get away from the negative influence of planets. Different planets have different characteristics. So, if you give charity or recite mantras keeping in mind the particular planet which is affecting you, it will help you lead your life in a happy and harmonious manner.
Accordingly, several curative measures have been suggested to reduce the negative influence of the nine planets (namely Sun, Moon, Mars, Mercury, Jupiter, Venus, Saturn and the two shadow planets Rahu and Ketu). Let us now these curative remedies to lessen the negative influence of planets:

Remedies To Ward Off The Negative Influence Of Planets:

Effects And  Remedies Of Sun

Let's begin with the king of the planetary system, Sun. Sun is the significator of your soul. If Sun is not favourable in your horoscope, then as per the guidance of the astrologers, you can put on Manik (Ruby) gemstone which is specific to Sun. Also, after performing the Suryanamaskar offer him water mixed with kumkum as per the remedies of planets in astrology. You should not oppose the policies of the government or officials. You should respect your father. Avoid salt in the food which you consume on Sundays. Manek/Ruby represents Sun. Buy Manek/Ruby to empower your Sun in the horoscope.

Effects And  Remedies Of Moon

If Moon is not favourable in your horoscope, it is referred to as polluted. Moon represents mind. That is why Moon related astrological measures are adapted to solve problems concerning the mind. Moon also stands for mother, so you should Know The Remedies To Ward Off The Bad Influence Of Planets give due respect to your mother.  Besides, consuming milk or water in silver utensils also helps in removing the negative influence of Moon. Also, you should put on white clothes and consume kheer (pudding) made from milk, rice and sugar on Mondays along with your lunch or dinner. You should pray to Lord Shiva. Ganesha particularly warns you against wasting water according to the remedies of planets in astrology. Moti/Pearl stands for Chandra (Moon). Wear Moti to gain blessings from the Moon.

Effects And  Remedies Of Mars

Mars is rightly called the Commander-In-Chief of the celestial bodies. If Mars is in the Cancer sign or in a lowly position, etc, it can exert a negative influence on the native. In order to remove the negative influence of Mars, you should pray to Lord Ganesha. You can offer Lal Til or  Gud (Jaggery). You should walk on the path of goodness as per the remedies of planets in astrology. You should place red colour handkerchief in your pocket. You should put on Copper or donate this metal. You should maintain sweet relationships with your younger siblings. Mars is red. So is Red Coral and it signifies Mars. Put on Red Coral to make your Mars stronger.

Effects And  Remedies Of Mercury

Mercury is called the youthful planet wandering in the garden. Mercury, if placed in an unfavourable position in your horoscope,  can also bring problems in the areas of intelligence and speech. To remove the negative influence of Mercury, you should pray to Lord Vishnu. Consume different vegetables and moong in your diet on Wednesdays. Consume mint (Pudina) along with wheat according to the remedies of planets in astrology. You should love the birds and animals. These measures will make Mercury strong. You should provide gifts to unmarried girls, also to your sister and aunt (Bua). As per the advice of the astrologer, you can put on Emerald, which is useful in solving problems related with Mercury.  Buy Emerald today and win the special grace of Mercury.

Effects And  Remedies Of Jupiter

Jupiter is the significator of the fifth house in the horoscope. If Jupiter is present in 6th, 8th or 12th houses, it can cause a negative impact on the natives. Natives have to face several difficulties. You can make a respected person, who is bigger in age, your Guru. You can even make one of the Sadhus or Saints as your Guru as per the remedies of planets in astrology. You should put on yellow clothes on Thursdays. You should also consume and donate sweet, yellow dishes. You need to worship the peepal tree. You can put on Yellow Sapphire (Pukhraj) as per the advice of your astrologer. You can buy Pukhraj and set to rest your Jupiter related problems.

Effects And  Remedies Of Venus

Venus is the significator of relationships and also wife. If Venus is weak, native may face lot many struggles in his/her life. In order to make Venus strong, you should consume ghee and aanvla. You should put on clean white clothes. You should respect your wife. You should worship Goddess Lakshmi according to the remedies of planets in astrology.  Dance to your favourite music. Keep lighted diyas at your place and give fashion accessories in charity. To win the special grace of Lord Venus, buy White Sapphire.

Effects And  Remedies Of Saturn

Saturn is one planet which affects the lives of the natives based purely on their karma (deeds). The great judge Saturn expects the natives to be disciplined and have the right intention. If Jupiter is lowly in the horoscope or in conjunct with Sun, etc, it can create obstacles in the lives of the natives. To remove these obstacles you should recite Lord Shani's mantra or Sunderkand. You should donate oil to the poor and aged. You can also consume food items made of black urad as per the remedies of planets in astrology. You can put on iron finger ring, feed crows from time to time and light oil diya below a Peepal tree. Is Shani's Sade Sati causing problems in your life? Set them right. Buy Sade Sati Report – Premium.

Effects And  Remedies Of Rahu-Ketu

The shadow planets Rahu-Ketu are always moving in retrograde motion. These two are malefic planets. So, you can recite mantras to reduce their negative influence. You can worship Lord Shiva. You can also recite Laghu Rudra. You can also get the Kalsarp Dosh ritual done. To ward off the evil impact of Ketu, you should feed birds and animals and donate woods in the cremation ground. To win over the grace of Rahu, you should worship Goddess Durga. You can also keep a dog pet as per the remedies of planets in astrology. As far as you can, you should not put on the stones related to these two planets. You can also put on Chandan on your forehead, keep a peacock feather with you. You can even sprinkle Gau Mootra in your house. Remove the negative influence of Rahu-Ketu. Get your astrological problems solved. Buy the Rahu-Ketu Transit Report For All Areas Of Life.
If the horoscope is properly analysed, it can throw light on your future. Planets influence as per their qualities and positions. The remedies suggested in our article can be a great help in removing the negative influence of planets. It is true that humans can not change their future completely, but they can make some positive difference to it. Astrological methods can put to rest all the negative developments caused by the unfavourable positions of the stars and planets.
With Ganesha's Grace,
Rita Jani
The GaneshaSpeaks.com Team
For Instant Solutions! Talk To Astrologer Now.
Share