What Is A Retrograde Planet In Astrology? 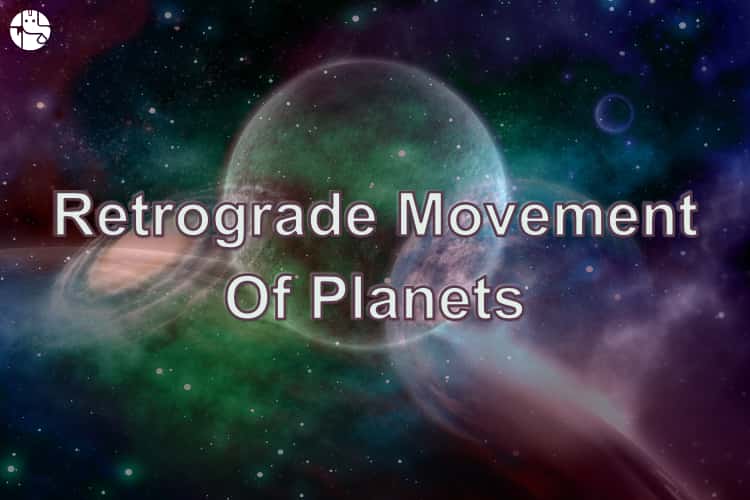 Retrograde/Vakri motion is an apparent change in the movement of the planet through the sky. Vakri in Sanskrit means twisted or crooked; it also means indirect, evasive and ambiguous. It is not real in that the planet does not physically start moving backwards in its orbit. It just appears to do so because of the relative positions of the planet and Earth and how they move around the Sun.

In other words, the planets always move in a forward direction only in the sky. They appear to be moving backwards at some specific distances and locations as seen from the surface of the Earth.

Sun and Moon are luminaries and hence never retrograde. Planets in the 5th, 6th, 7th, 8th or 9th houses positioned from the Sun are considered retrograde.

Mercury is retrograde three times a year.
Saturn and Jupiter once in a year.
Mars and Venus once in a two year.
Rahu and Ketu are always retrograde.

A. What are the consequences of having retrograde in one’s birth chart?

1. Planet retrograde in Birth-Chart: Planet retrograde in the birth-chart is an indication of strength (Chestabal is the technical term used for the strength when a planet is retrograde.) The potential of the retrograde planets is to be flexible, to twist thing around, to make them unclear, to teach its message in an indirect way, to view life in a different way to others – the quality of the planet changes when it turns retrograde. Retrograde planets are closest to Earth; therefore, their impact on the individual is the strongest.

2. Planet retrograde in Gochar/Current Transit: Along with the natal chart interpretation, the retrograde planet’s significations during the transits are not manifesting normally. As distinct from the fixed natal picture, transiting planets are the constantly changing its positions and interpretation. Benefics become less benefic, and malefics become more malefic when they are retrograde. The condition of retro-gradation is contrary or inharmonious to the regular direction of actual movement.

B. How can retrograde affect our mood and health?

Retrograde planets make human life appear to be stuck at the moment, neither moving forward or backwards.

The Mercury signifies our Communication. So if Mercury goes Retrograde, then there will have below effects,
Mood: Communication problems, presentation problems, arguments with the people in surrounding, Wrong statements
Health: Skin related issues, stress,

On the other hand, a positive sign is Retrograde Mercury blesses better writing skills.

The Mars signifies Energy, anger, courage, aggression and competition, and it is the planet of action. So in the chart, if the Mars goes Retrograde, then the native may face below situations,
Mood: Rash, impulsive, violent temper in nature, anger, found difficulties to handle competitive situations.
Health: Blood circulation issues, heat issues, boils, fever.

Jupiter is a planet of opportunities, wealth, and it signifies wisdom and expansion. When the Jupiter goes Retrograde then the native may face a lot of issues in below areas,
Mood: Such people feel proud from inside, become doubtful, issues in the relationship with the beloved one.
Health: laziness, hunger etc. type of health issues.

The Venus is a planet of love, romance, joy, comfort, luxury and it signifies affection. When the Venus goes Retrograde, then the native feels as below,
Mood: awkwardness mostly while interacting others, constant problems in love/relationships, wrong expressions before partner, less romantic, commitment issues, heartbreaks, breakups.
Health: issues related to It may lead native to addiction some times, poor personal hygiene.

Saturn is a planet of patience, responsibility. It signifies discipline and hard work. When the Saturn goes Retrograde, then the native can go through below situations,
Mood: Either workaholic or depressive towards work, many times situation inspires native to cross the ethical limits. Inferiority complex, inadequacy.
Health: Joint pains, blood circulation issues, veins related problems, loneliness, grim, depressed, negative.

All the above analysis will also depend upon other planetary influences in the native’s chart. To know more about your future, Ask our expert astrologer.