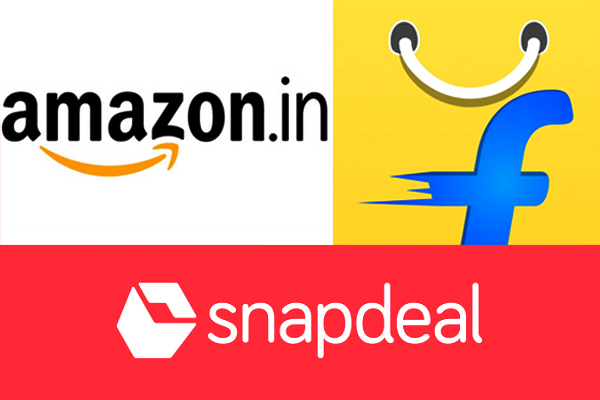 The concept of online shopping has achieved great momentum in India and the era of E-commerce is now on in full swing. Almost everything is now available online and the ease of transactions on the online sites is drawing more and more people to the 'e-tail' or 'e-shop' space. There are various famous online shopping sites, which have gained prominence in the past few months. But, in this article, Ganesha has taken the cases of Flipkart, Amazon and Snapdeal and has analysed their planetary potential and predicts how they will fare in the upcoming year.
1) FLIPKART
Date: 5th September 2007, Wednesday
Time: 07:00:00 (Surya Kundali)
Place: Bangalore, Karnataka, India
The Foundation Chart

Get Your Hand-written Janampatri By Our Experts.
Jupiter's transit seems to be the most favourable for Flipkart out of the three in the upcoming year.
The highlights in the Foundation Chart of Flipkart:
1) Sun placed in its own House.
2) Exalted Mercury in the House of Finance.
The negatives:
1) Two important planets – the Sun and Saturn are in conjunction with the malefic Ketu.
2) The placement of the Lord of the 10th House in the 12th House, that too in a retrograde state.
What do the planetary configurations imply?
The company will be able to enjoy good popularity amongst the customers. The company's overall financial position will be very strong and the financial strategies that the company will usually prepare will bear good results. But, on some occasions, the company may face rejections and complaints of product quality.
What next?
Ganesha feels that the transit of Jupiter over Natal Mercury will augur very well for the company in the months to come. It denotes accretion of wealth through huge profits generated by the company. The company will be able to witness record profits in the year ahead. Do you want to know what the planets indicate about your business? Then our personalised report - Business Ask A Question will be able to give an in-depth idea.
Also Read: Flipkart's Jabong Purchase: The USD 70 Million Deal May Not Turn Out To Be A Path-breaking Move; But Stock Position May Improve
2) SNAPDEAL
Date: 4th February, 2010
Time: 07:00:00 (Surya Kundali)
Place: New Delhi, India
The Foundation Chart

Get Your Hand-written Janampatri By Our Experts.
Though Snapdeal's image may get a boost, its financial strategies may not bear the desired results and this may call for course-correction between April and August next year.
The Highlights:
1) Yogakaraka Venus placed in the Ascendant. This is a very strong placement, as Venus also happens to be the Karaka of online shopping, entertainment and fashion.
Negatives:
1) Debilitated Mars in 7th House of partnership.
2) The karaka of transportation/logistics/delivery and communication –  Mercury is placed in the 12th House and is afflicted by Rahu.
What next?
For Snapdeal, Ketu will be transiting through the 2nd House till August next year. Jupiter, on the other hand, will be transiting through the 9th House. Due to the former planetary transit, the company's financial strategies may not bear the desired results and the margin of profits would not be very high. But, as Jupiter will be lending its benefic aspect on important Houses, the company will be able to expand its fields of operations and will be able to bring more products and services on board. The company's image may also get a boost, feels Ganesha.
3) AMAZON.IN
Date: 5th June, 2013
Time: 07:00:00 (Surya Kundali)
Place: Mumbai, Maharashtra, India
The Foundation Chart

Get Your Hand-written Janampatri By Our Experts.
Amazon.in is likely to increase its expenditure on marketing and publicity further in the next few months. Saturn's unusual movement next year may cause setbacks.
The Highlights:
1) Mercury is placed in its own Sign and is in conjunction with Jupiter and Mercury.
2) Saturn is exalted.
Negatives:
The combination of Saturn and Rahu, which creates the Shani-Rahu Shapit Dosh.
What next?
Ganesha notes that Ketu will be transiting through the 10th House for Amazon in the upcoming year. Because of this, there may be some problems in the top-level management. The 10th House happens to be the House of success and Ketu's transit will not augur well for the company in the year ahead. It may invest huge amounts for marketing, publicity and product promotion, but it may all not result into the desired output. On the other hand, Jupiter will be transiting through the 5th House. This transit will save the company from major losses and will ensure good gains. Do you want to know how will your financial position be? Then get the answers in our hand-written Wealth Ask A Question.
Also Read: “Jio Aur Jeene Do” May Be Reliance Jio’s Message To Its Competitors In Coming Months, Feels Ganesha
The comparative analysis and the conclusion:
Ganesha says that out of the three companies, the financial stars of Flipkart seem to be quite strong through on the Diwali day 2016 as well as through the upcoming year and this will help the Bangalore-based company to further strengthen its position and thus lead the moolah race. Amazon.in seems to be in the near-second spot, thus leaving Snapdeal in the third place.
With Ganesha's Grace,
Dharmesh Joshi
(Special Inputs: Aaditya Sain)
The GaneshaSpeaks.com Team
Have some queries in your mind regarding certain areas of life? Then, why continue to remain in doubt. Talk To Astrologer now for expert guidance and smart solutions!
Share