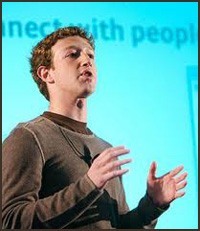 Introduction
The fact that Facebook is a phenomenon world over is beyond debate. The social networking website that changed for ever the way people socialised and connected with others was conceptualised and co-founded by the American computer prodigy Mark Zuckerberg. Mark, while at Harvard University,
in 2004 found Facebook with his roommates and college mates Eduardo Saverin, Dustin Moskovitz and Chris Hughes. Zuckerberg was named Time
magazine’s `Person Of The Year’ in the year 2010. With an estimated personal wealth of over $17 billion, he is made to the list of youngest billionaires in the world. Today, Facebook has over 845 million active users from countries and ethnicities all across the world. People of all ages and classes, whether technology-savvy or new users, have got hooked to it.

Last week, Facebook filed for an initial public offering (IPO) that could value it between $75 billion and $100 billion, which could make it one of the biggest US stock-market débuts of all time. The company hopes to raise as much as $10 billion once the company’s shares go public. The company’s latest financial results also show that it raked up a $1 billion profit last year out of $3.71 billion in revenue. Facebook Inc. makes 85% of its revenue from advertising, while the rest is contributed by social gaming and miscellaneous fees.

So far, so good, rather revolutionary! The going has been great for Mark Zuckerberg, and people do respect him for making the social networking phenomenon a reality and a revolution. But will the Facebook Inc.’s IPO live up to the hype that surrounds it, and how will it affect Zuckerberg’s personal fortune and future? Ganesha finds out with the help of Vedic astrology. 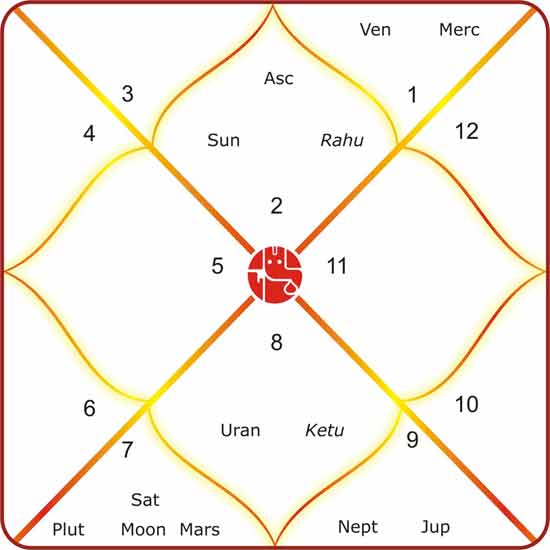 Sun is posited in Zuckerberg’s ascendant which has brought him tremendous success in the computer technology field. Swagruhi (in own sign) Jupiter in his chart is observed in the 8th House which is also indicating sudden success in his ventures, says Ganesha.

Sun’s placement in the 1st House denotes tremendous success in all spheres of his life. The 1st House in his chart also indicates leadership potential, conditions of prosperity, health (both financial and human resources), the philosophy of life. Sun in the 1st House indicates growth and development. Enterprises which commence operations during this period progress well and achieve success.

Mars being a fiery planet is capable of generating new ideas. Mars invigorates and brings vitality to achieve a high level of production, and Saturn bestows success and prosperity. As per Ganesha’s view, natal Sun and Mars are the primary signifiers of technical fields.

The largest planet in our solar system, Jupiter indicates gains and expansion. And, Jupiter is also the signifier of wealth and property. It is Swagruhi (in own House) in Mark’s chart, and this is responsible for his splendid prosperity and success.

Zuckerberg was also under the influence of Saturn Mercury Rahu Dasha cycle during the first quarter of 2004. Saturn is the Yoga-karaka planet, whereas Mercury signifies the 2nd House of wealth and 11th House of gains. These planetary positions can be held responsible for Mark’s capability to launch Facebook from his Harvard dormitory itself, feels Ganesha.

Ganesha observes that Mark was also under the influence of Saturn Venus Mars Dasha cycle during the middle of 2007. Saturn is the Yoga-karaka
planet, and Venus is the ascendant Lord (in Surya Kundali). These planetary forces helped him create the Facebook platform, from which developers could launch social applications within Facebook.

What Next?
Currently Rahu is transiting in the zodiac sign Scorpio over Zuckerberg’s natal Ketu, while Ketu is simultaneously transiting over Natal Rahu. This is not a favourable indication. As per the Surya Kundali, the 7th House signifies the relations of a company with third parties by the way of agreements, contracts, trade activities, competition etc. Also, besides effecting the overall growth and activities of a firm, the 7th House influences the company’s professional ability to handle complex issues. Hence, it may be noted that the aforementioned Rahu-Ketu transits could disturb Facebook’s overall performance.

The mighty planet Saturn plays a vital role in Mark Zuckerberg’s natal chart and hence his life. That is why whenever Saturn changes its sign, a positive or a negative event may occur in Zuckerberg’s life. Ganesha observes that the transiting Saturn’s influence over natal Moon through the 6th House of Zuckerberg’s chart indicates a challenging phase in his ventures.

On the whole, Ganesha notes that the year 2013 may bring a turning point in Zuckerberg’s life and fortunes. On a general level, in 2013, Saturn and Rahu, both of which are negative planets, are set to transit through the zodiac sign Libra. In Mark Zuckerberg’s specific case, it is worth mentioning that Saturn, Mars and Moon, three major planets, are already posited in the zodiac sign Libra in his natal chart. Thus, Ganesha foresees a possibility of something major happening in his life, due to this general planetary activity.

However, the influence of transiting Jupiter over natal Sun through the 1st House seems highly favourable as far as his business expansion plans are concerned. Financial and property gains through hard work may also be expected, says Ganesha.