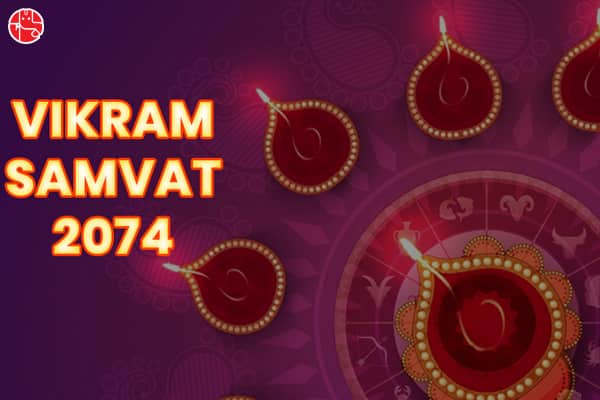 “O Lord Brahma, Lord Vishnu!Please enable me to absorb the Principle of Creation and the Five Principles present in the atmosphere. Let the Divine consciousness present in these principles be preserved consistently. Let the energy thus received be used for my spiritual practice.”

A Puja offered on the Hindu New Year, which is also known as Vikram Samvat.

‘Samvatsaraor’ in short, ‘Samvat’ is a Sanskrit term for ‘year’. Vikram Samvat or Bikram Samvat was founded by Emperor Vikramaditya of Ujjain. The inscriptions of King Jaikadeva, who ruled Okhamandai in Kathiawar State (now Gujarat), shows the earliest mention of the Vikram Samvat Era. According to the details inscribed on it, it mentions 794 Vikrami Samvat correspondings to AD 737 as the date of installation.

A legend goes with it that King Gardabhila captured a nun named Saraswati, who was the sister of Jain monk Kalkacharya. The monk went to the Saka ruler in Sakasthana for help. Saka King defeated Gardabhila. Later he was released, but after that, he renounced the world and went to the forest. He was killed by a tiger. It is said that his son Vikramaditya later raided Ujjain and defeated the Sakas in 56 BC. Thus, to celebrate this event, a new era called Vikram Samvat was begun in 57 BC. Vikram Samvat meaning a Lunar Calendar based on ancient tradition and 56.7 years ahead of the Solar Gregorian Calendar.

According to the southern (Purnimanta), it is believed to have started in 56 BCE and in the northern (Amanta) in 57-56 BCE. The Shukla Paksha in both coincide, and most festivals occur in this era. There is an inscription that becomes evidence that on which time the Vikram Samvat Era started.

The seasons in the Indian Calendar follow the Sun, and Moon’s movements define the months and days are defined both by the sun and the moon. Some things between the Vikram Samvat and the Gregorian Calendar are the same as both the Calendars have 12 months. But in the Vikram Samvat solar sidereal years and lunar months are used. So Vikram Samvat Calendar has two fortnights in each month, having 30 lunar days. These days are called ‘Tithis’

The mismatch between the 12 lunar cycles is not adjusted by adding days in the Vikram Samvat calendar. The Samvat Calendar adds an extra month to the calendar every three years or one time every 19 years. In this way, no change is brought in the lunar month. The extra month that is added is the ‘adhik masa’.

We, the people in India, follow two calendars. One is the Saka Samvat and the other is the Vikram Samvat.

Shaka Samvat was started in 78 BC, and it is accepted as the national calendar of India. Vikram Samvat started in 57 BC. Moon is the basis of calculation in both calendars.

The names of the months in both calendars are the same. Moreover, both the calendars have Shukla Paksha and Krishna Paksha. In the Vikram Samvat, the new month starts with the Krishna Paksha, which comes after the full moon day. In the Shaka Samvat, the new month begins with the Shukla Paksha, which comes after the new moon. This creates a difference between the first day of both the Samvats. The first day or Pratipada of the Shaka Samvat is the Shukla Paksha of Chaitra, while it is the sixteenth day of the Vikram Samvat.

It is the first month of the year. If we refer to the Gregorian calendar, it begins in the month of March-April. The month is associated with the Spring season. The first day of Chaitra month is celebrated as New Year Day. This new year is celebrated with different names in different parts of the country as it is known as Gudi Padwa in Maharashtra, Chaitra Vishu in Karnataka and Ugadi in Andhra Pradesh, and as Baishakhi in Punjab, which falls on 13th or 14th April every year. Ram Navami, the birth of Lord Rama, which is celebrated on the 9th day of the month and Hanuman Jayanti, which comes on the last day of the month.

You can also understand your upcoming year in detail with monthly insights. How? Access your Month wise 2021 Report Today!

It falls in the months of May-June of the Gregorian Calendar. The festivals that are celebrated during his month are Shani Dev Jayanti that is celebrated on New Moon Day; Ganga Dussehra that celebrates the arrival of Ganga on Earth; Nirjala Ekadashi, which is celebrated on waxing moon day; Vat Poornima, which is celebrated in Maharashtra and Karnataka on the full moon day, the Snana Yatra the bathing festival also celebrated on Purnima Day. In this festival, a procession of the deities of Jagannath, Balabhadra, Subhadra, Sudarshan and Madanmohan are taken to the Snana Bedi. At the Sanna Bedi, they are bathed ceremonially and decorated for a public audience. This festival takes place at Jagannath Temple (Puri), and it even takes place at Ahmedabad (Gujarat). Another great event that has been celebrated for centuries is Sitalsasthi Carnival which is celebrated in Odisha.

In June-July month of the Gregorian Calendar falls the Asadha month of Vikram Samvat. The festivals celebrated during this month are Guru Purnima and Shayani Ekadashi.

In July-Augst of the Gregorian Calendar falls the auspicious month of Sravana of the Vikram Samvat Calendar. This month is marked by many important festivals such as Krishna Janmashtami, Raksha Bandhan, Nag Panchami, Shravani Mela Kanwar Yatra. The last day of the auspicious month ends with the worship of the Bull by the farmers in Maharashtra.

In Tamil Nadu and Kerala, Aadi Amavasya is celebrated. Major festival time at Deoghar in Jharkhand called Shravani Mela. in this month that deals with the coming of the South Western monsoon winds. In this month, many Hindus fast. It is also a month of the annual pilgrimage of devotees of Shiva, known as Kanwaria.

This month is the sixth month of the Vikram Samvat, and it begins on the New Moon in the month of August-September. Ganesh Chaturthi, which celebrates the birthday of Lord Ganesha, is the main festival of this month. Anant Chaturdashi is observed during this month.

September-October month of the Gregorian calendar is the month in which the Ashvin month comes. The month that is to be followed by the main festivals

This month covers the month of October-November of the Gregorian Calendar. Many important festivals such as Durga Puja, Navratri, Dussehra and Diwali are celebrated. Kojagiri festivals and Kali Puja are also performed.

It comes in the month of November-December of the Gregorian Calendar. It is called Moksada Ekadasi. Krishna Paksha Ashtami of this month is celebrated as the Kalabhairava Ashtami. This day is specially marked because, on this day, Lord Shiva appeared on Earth in the fierce avatar (manifestation) as Sri Kalabbairava.

Pausa is December- January of the Gregorian Calendar. It is the winter month. The Harvest Festivals are the major festivals of this year. They are known as Pongal and Makar Sankranti etc.

It corresponds to the months of January-February of the Gregorian Calendar. It is the eleventh month and named so because the full moon is generally found nearby or within the cluster called ‘Magha’ Vasant Panchami (Festival of Kites ), Saraswati Puja, marks the start of the spring. Ratha Saptami is a Hindu festival that falls on the seventh day (Saptami) in the bright half (Sula Paksha) of the Hindu month Magha.

It is the twelfth month of the Vikram Samvat and falls in the month of February-March of the Gregorian Calendar. The famous celebration of the ‘festival of colours- Holi’ is celebrated, which marks the end of the winter season. Shigmo is the festival celebrated in Goa and Konkan this month. Phalgun Mela, an important fair in Khatushyamji in Rajasthan, is also celebrated.

On 25th March 2020 the day of Chaitra Navratri marks the beginning of the month of Vikram Samvat 2077. We celebrate our important days, festivals, and fasts according to the Vikrama Samvata calendar.

April 13 marked the New Year for the Vikram Samvat 2078 or Vikram Samvat today. According to the positions of the different Graha, it is said that such a unique arrangement has been created after 90 years. On the other hand, the Current Samvat will be known as ‘Rakshas’.

“Lord Brahma began his creation on Chaitra Shukla Pratipada. So we celebrate this day when Brahma started creating the Universe as the First Day of the Hindu Calendar- Vikram Samvat Calendar.”

Attract Good Luck With Your Personalised Horoscope On The Auspicious Day Of Vikram Samvat! – Talk To Expert Astrologer Now!