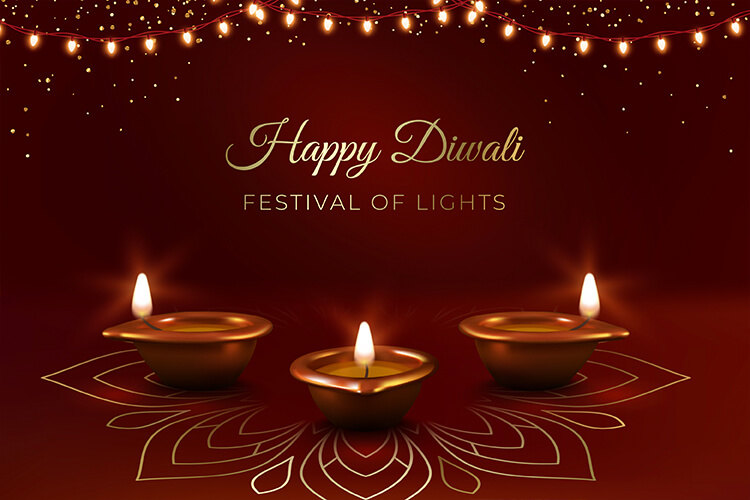 Diwali, the Hindu festival, which is also known as Deepawali, is the festival of lights. On this day, people engage in cleansing rituals such as decorate their home, gather for a special feast, and light fireworks. In India, Diwali is the most awaited festival which is celebrated with great enthusiasm. The festival gets its name from the two intense words, deep which mean “Light” and avali means “a row” to become a row of light.

Significance and Reason of Celebrating Deepavali

The sparkling festival of light, Diwali which symbolizes the Light over Darkness, triumph over evil and knowledge over ignorance. Every year Diwali is observed on the holiest month of Kartik with great piety and enthusiasm. Here are the four main legends out of the six legends of why we celebrate Diwali?

Goddess Lakshmi’s birthday: It is said that the goddess of wealth, Lakshmi, has incarnated from the depth of the bottomless sea on Diwali. As per the Hindu scripture, at one point, both Devas and Asuras were mortal. To seek the deathless condition, they churned the ocean for Nectar of immortality which is also named as Samundra Manthan. During the practice, a host of divine celestial objects came into being, and among them, one was Goddess Lakshmi and subsequently married to Lord Vishnu. And thus, the day is marked as the light over darkness.

The Victory of Rama: The great book of Ramayana reveals how Lord Rama, (the incarnation of Lord Vishnu in Treta Yug) conquered Lanka by defeating the devil king Ravana, and after being on exile for fourteen years returned to Ayodhya, his Janmabhoomi with his wife Sita and brother Lakshmana. Thus, to celebrate the homecoming of their beloved King, they celebrate the day by illuminating the darkest night with candles and firing crackers.

The return of the Pandavas: Another great epic of Mahabharata reveals that it was the day of the new Moon when the Pandavas appeared after suffering a banishment for 12 years with his wife Draupadi. Thus, on the return of Hastinapur, the day has been celebrated by lighting earthen lamps as traditional rituals.

Goddess Kali: Kali, also known as Shyam Kali. According to the legends, a long time ago when the Gods lost in the battle with the demon, Goddess Kali was born from the forehead of Goddess Durga to save the earth from the growing cruelty of evil spirits. After forging a catastrophic attack on the demon, she lost control and started killing whoever came on her way, so to stop her Lord Shiva had to intervene. That ferocious moment is depicted as the moment when he steps on the Lord and repents. Since that day, the momentous day is celebrated as the day of triumphing good over evil.

Importants dates and Muhurat of Deepawali 2023

We all will be busy in welcoming the festival of light this year with utmost eagerness but without exact time and Muhurat the festival remains incomplete, so here check out the exact date and Muhurat of the Diwali and festivals related to it.

On the evening of Diwali, first, the idol of Goddess Lakshmi and Lord Ganesha is worshipped by offering varieties of ritualistic objects, such as Kheel, Sweets, Batashe. It is also believed that goddess Lakshmi pays the visit to the house of devotees and showers blessings and prosperity on him. This Diwali if you don’t want to deprive of the blessing of Goddess Lakshmi and Lord Ganesha, seek the blessings of the deity and bring prosperity and wealth in your home by performing virtual Lakshmi Puja and Ganesha Puja with zero hassles. It is said that making an offering to the deity after sunset is considered auspicious.

On this day, devotees clean and redecorate their house as an offering to the deity. On this day, Lord Kuber is also worshipped to get his blessings and for stable income. You can also seek the blessings of Lord Kuber by buying Kuber Yantra and feel the presence of him by being blessed with prosperity and love.

During Diwali Puja, Place a red cloth on the puja chowki and place the idol on it. Then do the tilak, offer flowers and light diya with the mixture of ghee. After that, offer water, Roli, Rice, Fruits, Jaggery, Turmeric, and Gulal and then begin the puja. Remember that all the family members must be present during puja.

Diwali in Other Places

The festival of light is not bound only in India, but in other parts also, places like Tobago, Nepal, Suriname, Mauritius, Singapore, Fizi, and so on. It is celebrated with great enthusiasm. People across the world find this festival auspicious and consider this festival as a sign of the winning of light over Darkness.

How Do People Celebrate Diwali?

Just the stories of Diwali vary from region to region, similarly the rituals and celebration also changes with each culture. The most common thing amongst every culture, region, and people is the abundance of sweets, family gathering, and lighting of clay diyas. The lighting of diyas symbolises the inner light which protects the household from evil darkness.

The common rituals and celebrations of Diwali all across India are cleaning the house, performing puja, preparing and distributing sweets, decoration of home from lamps and rangolis, and enjoy with friends and family with feast and fireworks.

Attract Good Luck With Your Personalised Horoscope On The Auspicious Day Of Diwali! –
Talk To Expert Astrologer Now!