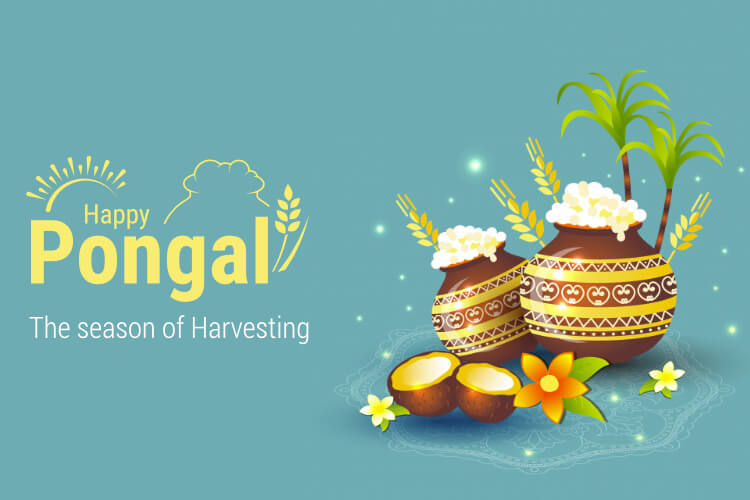 Pongal is a Tamil Harvest festival that is dedicated to Sun God, thanking him for the agricultural abundance. In Tamil Nadu, Puducherry and Srilanka, the festival is celebrated on a grand scale, which continues over four days. The Tamil word Pongal means “boiling,” and The harvest festival, which marks the end of Margazhi’s month is celebrated as a ritual of thanksgiving for the harvest of the year.

The day also marks the end of the chilly winter season and the onset of spring throughout the Northern Hemisphere. This festival is known as Makar Sankranti in Northern India and Pongal in the South.

The period is also marked as the Uttarayana Punyakalam and is considered auspicious. Legends have it that the Devas wake up after a six-month-long slumber during this period. And thus, it is supposed that whoever passes away during Uttarayana attains salvation.

According to tradition, the festival marks the end of the winter solstice and the start of the Sun’s six-month-long journey northwards (the Uttarayanam) when the Sun enters the zodiac Makara (Capricorn). The festival is named after the ceremonial “Pongal”, which means “to boil, overflow” and refers to the traditional dish prepared from the new harvest of rice boiled in milk with jaggery (raw sugar). This also corresponds with the time when the Sun enters the 10th house of the zodiac, Makara or Capricorn. Do you want to know what planets tell you about your life? Explore Free Janampatri.

Celebration and Rituals of Pongal

People began preparing for the celebration of Pongal prior, and there are several Pongal rituals that people followed. The most common rituals include cleaning the houses. The place where the Pongal prayers are to be carried out is cleaned and covered with dung, a day before the Pongal festival. The place to carry out these rituals is generally a courtyard or porch.

Pongal and Its Types

The great Tamil festival Pongal starts with a Bhogi. Bhogi festival begins on the last day of Margazhi month of the Tamil calendar. Traditionally Bogi festival is for Lord Indian, who has been worshipped as “God for rain”. This festival is to thank Lord Indian for giving enough rain for the harvest.

Thai Pongal is also known as Surya Pongal. It is the time when most of the main events take place. On the second of the Pongal festival, religious rituals, or pooja is performed and offer farm harvest as a tribute to the Gods along with other obligations. A special feast is prepared using Rice, Lentils, Ghee, and Jaggery.

Mattu Pongal is the day celebrated in the name of cows. The cattle are adorned with bells, sheaves of corn, and garlands and worshipped.

Kaanum (or Kanu) Pongal marks the last day of Pongal. The Kaanum means “Visit”. On this day, a ritual is performed where the leftover sweet Pongal and other food are set out in the courtyard on a washed turmeric leaf, along with betel leaves, betel nuts, and sugar cane.

On the auspicious day of Pongal, we present you the facts related to Pongal and its types.

Some special Dishes for Pongal

Pongal festival is a great festival among Hindus, and without traditional delicacies, Pongal Festival too is just incomplete. So, let’s take a glimpse of some traditional Delicacies.

Ven Pongal: Don’t get confused by the word Pongal. It is the name of a South Indian Dish. In Tamil Nadu, the dish is considered healthy. It is made with broken rice, moong dal, ghee, and pepper pods served with sambar or coconut chutney. It is also considered one of the best Pongal dishes to prepare.

Puran Poli: Puran Poli is a special and traditional dish for Pongal. Also known as a sweet flatbread. Puran Poli is prepared with coconut and Bengal gram dal with ghee. It is enjoyed in the states of Gujarat, Tamil Nadu, Goa, Maharashtra, and other regions of West and South India.

Murukku: Murruku is a part of Pongal feasts made with urad dal. It is a coiled shape along with crunchiness, which makes it a delicious winter snack.

Sakkarai Pongal: There are several Pongal dishes prepared during this festival. Each of them has a different flavour and taste. It is made of green gram, jaggery, and rice.

Like every year in 2022 also Pongal Festival to be celebrated on 14 Jan on Magh Krishna paksha Dwitiya throughout the nation. On this auspicious occasion, we must perform Surya Puja and Magha Nakshatra Puja. It is believed that offering jaggery, ghee, sugar etc. at a religious place will enrich one’s life and also the life after death. Let’s check out some more important dates regarding the Pongal festival.

Ganesha wishes you a happy and Joyful Pongal. May this new year and on the occasion of this auspicious festival, your life fills with sweetness.

To Get Your Personalised Solutions! Talk To The Best Astrologer Now.
With Ganesha’s Grace,
The GaneshaSpeaks.com Team
Astrologers trained by Shri Bejan Daruwalla.