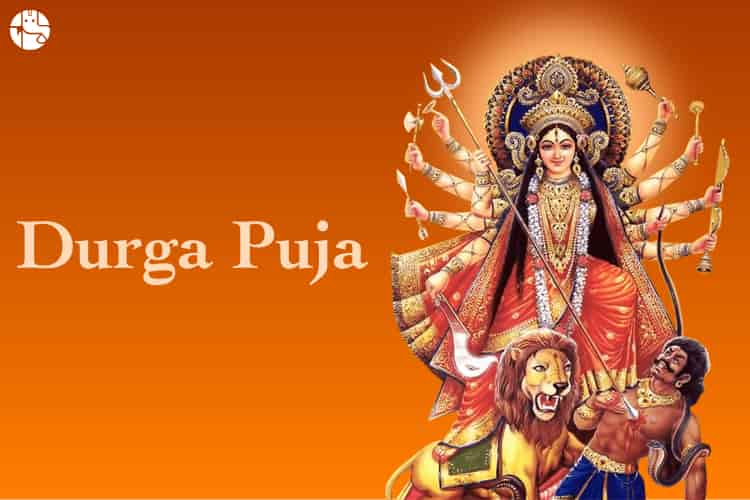 With the cool winds of the autumn and the lush green sugar canes coming straight out of the fields, you can be sure that the long wait is over! That time of the year is here, when we can revel in the spirit of the jubilant Durga Puja! This grand Hindu festival, which is celebrated prominently by Bengalis across the world, is a 5-day long extravaganza, which is celebrated in honour of the powerful mother Goddess. Durga Puja is one of the most important festivals in India. It is celebrated with great enthusiasm and fervour in different parts of the country. Durga Puja is celebrated the most in the state of West Bengal. But, it is also celebrated in other states like Orissa, Tripura, Bihar, Jharkhand, Maharashtra, Uttar Pradesh, and Gujarat.

During the Durga Puja, God is in the form of the Divine Mother. Thus, Mother Durga is worshipped in various forms on the nine days of Navratri. She comprises of Durga, Lakshmi, Saraswati. The nine forms are the nine mahashaktis. Following are the nine forms of Goddess Durga on the nine days: 1st-day Shailputri, 2nd-day Brahmachanrini, 3rd-day Chandraghanta, 4th-day Kushmanda, 5th-day Skandmata, 6th-day Katyayini, 7rth day Kalratri, 8th-day Mahagauri and on the 9th-day Siddhidatri.

Durga Puja continues for five days and each day is called by a different name. These names are as follows: Maha Shasti, Maha Saptami, Maha Ashtami, Maha Navratri, and Vijaya Dashami.

The sixth day of Devi Paksha marks the auspicious beginning of Durga Puja in Bengal. On the 'Bodhon' or first day, Goddess Durga is welcomed on earth along with her family. Mother Durga who holds her son and rides a lion is worshipped on this day. She is also accompanied by her four children: Saraswati, Lakshmi, Ganesha, and Kartikeya. Some special rituals are performed before performing the puja of the Goddess like Amantran, Bodhan, etc. are executed.

Maha Saptami is the day when the Maha Puja Begins. On this day, before dawn, a part of a banana tree is immersed in sacred water, and after that, it is adorned with a saree, just like a newly married bride. This is popularly known as Kola Bau. The Kola Bau is then carried to the stage and is placed next to the idol of Lord Ganesha. On the early morning of Maha Saptami, Goddess Durga is worshiped with nine different plants, known as Nabapatrika. These plants fundamentally represent the nine different incarnations of Shakti. The idol is bathed in the Ganges, followed by the chanting of mantras.

This day is the most sacred day of Durga Puja as Maa Durga is believed to enter and awaken the idol when priests perform rituals through the chanting of religious mantras.The devotees start the morning with Pushpanjali. They take holy bath and observe fast before offering Pushpanjali. With fresh flowers in hand, they recite the mantra, offer flowers to the feet of the Goddess.

The main attraction of the day is Kumari Puja. If you want to see the auspicious awakening of Goddess Durga, you have to visit the Belur Math in West Bengal where a young teenaged girl is worshiped by the devotees as the incarnation of Maa Durga.

People offer their prayers to the Mother Goddess in the form of Anjali. They also recite the Chandipath. Kumari Puja is also performed. A young girl at the tender age of 9 is worshipped as Mother Durga. This young girl is worshipped with lots of emotion and devotion. Sandhi puja is performed in the evening, which is treated as the meeting phase of Maha Shasti and Maha Ashtami.

Maha Aarti' brings the formal end to religious customs. Cultural festivals and celebrations like music, dance, drama enthrall the audience throughout the night. On Maha Navami, the fast is broken by a major Bhog and Prasad is offered to Goddess Durga and shared amongst devotees.

Besides, Vijayadashami, also known as Dussehra is celebrated on this day in honour of the victory of Lord Rama over Demon Ravana and also the triumph of Goddess Durga over Mahishasura. This day, which is also a declared national holiday, is celebrated with the burning of the idol of Ravan and firecrackers across India.

In Bengal, Goddess Durga bids adieu with Her family. Devotees join hands with dhakis in the precision and the idols are immersed in the water in the evening. Devotees share sweets with each other and celebrate by dancing. The evening is enriched by various cultural programs like art, drama, dance and music.

Trendy Hairstyle that Suits You Perfectly as per Your Zodiac