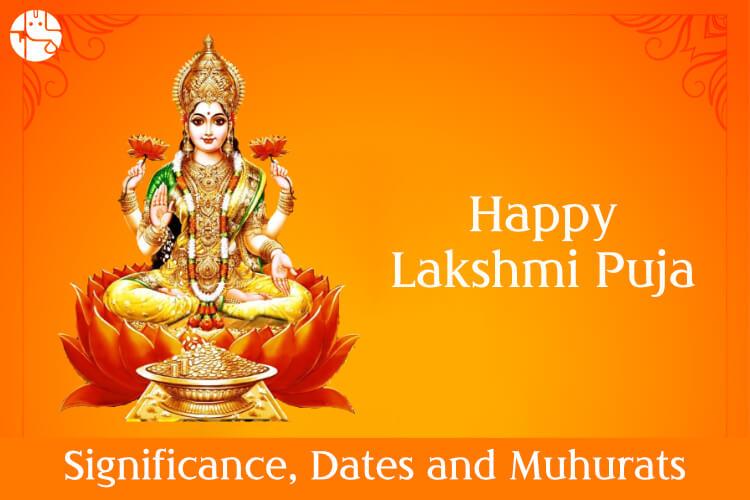 Goddess Shri Lakshmi has been referred to in the above lines. We can find a hymn on her in the Rig Veda, which is the oldest of the Hindu Scriptures. The word Lakshmi has been derived from the Sanskrit word Lakshya, meaning aim or goal and as her name suggests, she is the goddess who’s responsible for giving us wealth and prosperity. This wealth may be spiritual or monetary.

Goddess Laxmi is the one who symbolises good luck. Goddess Lakshmi was the wife of Lord Vishnu and the daughter of Goddess Durga. It is told that in each of the avatar’s of Lord Vishnu, she appeared with him taking different forms.

Goddess Lakshmi not only gives us wealth and mental peace, but it also takes our goes at our bad times or on our bad actions. This is associated with the story of Goddess Lakshmi.

When Lord Indra returns to his capital city Amravati, he starts observing the effects of the curse. Gods start misbehaving. Living beings such as plants start dying. The beast that rests in every living being comes out. Amravati becomes a land of Demons instead of Gods. As the gods’ virtues had turned and moreover the area of Amravati was invaded by the Demons.

The churning of the ocean began. It was a war between the Gods and the Demons. During this churning Goddess Lakshmi comes out seated on the full-blown lotus. Now while the choice rest on Goddess Lakshmi to choose, she chooses Lord Vishnu as her master and thus comes on the side of the Gods. Now the Gods were able to get their powers back, and now to defeat the demons became easy. The Demons were defeated, and thus Gods won.

Thus, the coming of Goddess Lakshmi on the side of the Gods helped them to perform good work, be polite, helpful, get their energy, be at mental peace and have the energy to do work. So, from this, we understand that Goddess Lakshmi is the Goddess of Material as well as Mental Peace.

Special Days on Which Laxmi Devi Pooja is Done

On the Diwali festival just two days before it, on the day of Dhanteras, Goddess Lakshmi is worshipped. On Dhanteras Diwali Lakshmi Pujan is done.In West Bengal, Assam, Odisha and Tripura Goddess Lakshmi is worshipped on the full moon day of the lunar month of Ashwin. In West Bengal, Lakshmi Pooja is called Lokkhi Puja or Lokkhi Puja, and it is celebrated on Sharad Purnima or Kojagiri Purnima, the first full-moon after Shardiya Navratri. Kojagari Lakshmi Puja is done on Vijaya Dashami (Dussehra) and the immersion of the ten-armed Goddess Durga.

On Diwali, Goddess Lakshmi is worshipped, the whole house is cleaned thoroughly, and beautiful rangoli is made at the entrance of the house. House is decorated with garlands made from the flowers of marigold and mango leaves. On both the sides of the main door, two unpeeled mangoes are kept on either side of the Manglik Kalash. A raised altar is decorated with a red cloth, and on it, the idols of Goddess Lakshmi and God Ganesha are placed. The idols are decorated with clean and beautiful clothes and jewellery.

Women are seen as embodiments of Goddess Lakshmi of the house. The diyas are lighted and kept around the whole house. This is done to welcome the Goddess of wealth and prosperity. The people of the house wear new clothes to do the puja.

Then on the left side of the altar, keep a white cloth and prepare nine slots with rice which symbolise the Navgraha. Sixteen slots of wheat need to be prepared on the red cloth.

After the worship of Lord Ganesha, tilak is applied on the forehead of Goddess Lakshmi. Lakshmi devi pooja begins with the lighting of dhoop.Then flowers are offered, earthen lamps are lighted and sweets are offered. With these offerings’ coriander seeds, cotton seeds, dry whole turmeric, silver coin, currency motes, supari and the seed of lotus flower are offered to Goddess Lakshmi.

Then Lord Vishnu and Lord Kuber are worshipped by lighting the earthen lamp and dhoop. Flowers and fruits are offered.

Then Goddess Saraswati is worshipped. Tilak is applied on her forehead, and a lamp is lighted. She is the one who grants us divine knowledge and wisdom.

Needs to be chanted 108 times.

From the Rigveda, Shri Suktam is recited to invoke all the eight forms of Goddess Lakshmi.

After completion of lakshmi pooja on diwali, the family members go outside of the house and burst crackers. This burning of firecrackers signifies the way in which we chase away the malicious spirits. Special feast is enjoyed by the members of the family along with their friends and relatives.

When the Kojagari Vrata is performed in front of Lakshmi’s idol under the moonlight after fasting for the entire day. The Vrat is broken after completing the puja at night and by offering flattened rice and coconut water to Goddess Lakshmi.

Various offerings are prepared to please Goddess Lakshmi and seek her blessings. The items that are prepared are ‘Khichuri’, ‘taaler phopol’, ‘narkel bhaja’, ‘naru’ etc.

Various offerings like , ‘taaler phopol’, ‘narkel bhaja’, ‘naru’ and some sweets are made to please the Goddess and seek Her divine blessings.

“Ko jagorti’ which means “Who is awake”, is the word from which the Kojagari word comes. It is believed that on the full moon day, Goddess Lakshmi descends on the Earth. So for welcoming her the diyas are kept outside the house.

People keep on chanting mantras and shlokas to welcome her, which is also considered very auspicious.

When she comes to the Earth, she roams around and observes the human beings and during it, she asks, ‘Who is awake?’ The people who listen to her and answer her become the lucky ones to receive her divine blessings.

To welcome Goddess Lakshmi, devotees draw the footprints called ‘Alpanad’ is drawn to welcome the Goddess into their homes.

Lakshmi Puja-Importance of The Day

Jain Diwali Puja means to commemorate the anniversary of Lord Mahavir’s attainment of Moksha or freedom from the cycle of reincarnation. He was the last Tirthankar. Diwali was first referred to as dipalikaya in the Jain Scriptures. The word ‘Dipalikaya’ means the ‘light leaving the body’. As per their scriptures, the earth and heavens were illuminated to mark the occasion of Lord Mahavir’s enlightenment. Jains celebrate it by lighting the lamps and distributing sweets. They even fast and sing hymns and chant mantras in honour of Lord Mahavir. The next day of the Diwali marks their New Year, and they celebrate it by saying ‘Saal Mubarak’.

The Kojagara Puja in 2021 is on 19th October and Diwali is on 4th of November.