Healthiest Of All – Sattva, Rajas or Tamas 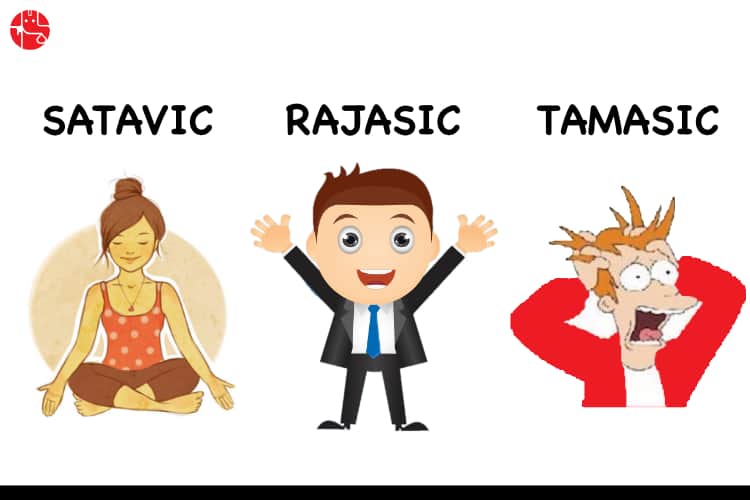 The world is full of people with different qualities. Some may be positive, while others may be negative. But whoever thought that the energy of our planets governs our rates? Every planet in Astrology has some quality, and this is known as Gunas. A person’s nature and character are based on the Gunas of the planets in the houses.

Sattva Rajas Tamas Meaning & How to Identify Them

According to the Gunas, people can be Satvik, Rajsik or Tamasik.

The three guṇas known as Satvik, Rajsik and Tamsik are the energy movement that helps define a person’s character. They can be positively, negatively and neutrally charged. As per Astrology, the three Gunas are associated with zodiac signs.

People who have Satvik guna are the ones who are incredibly loving, generous, knowledgeable, intelligent and wise. They have divine qualities and are always devoted to God. Satvik guna helps us gain an understanding of higher wisdom.

Selfish people who are violent and impulsive have Rajasic guna. They show too much aggression and a competitive spirit with great passion. Rajsik guna motivates us.

Those who are ignorant and often remain away from greater wisdom are the ones with Tamasic guna. This Guna brings stability.

Talking about stability, are you worried about Job stability in these trying times? Talk to an astrologer and get all the answers.

As mentioned above, every planet has a specific guna. The Sun, Moon, and Jupiter are known to be Satvik. Rajsik Guna is dominant in Mercury and Venus. While Saturn, Mars, Rahu, and Ketu are Tamasik.

Along with Satvik, Ketu has other malefic qualities which can be nullified with Cat’s eye, which is a gemstone for Ketu.

The twelve zodiac signs play a vital role in expressing the four elements – fire, earth, air, and water. These zodiac signs also have their associated Gunas, but one should remember that we cannot compare the Gunas. We need to balance the three Gunas. This can be attained by harmonising our mind, body, and Soul.

Signs and Planets of Gunas

The table given below briefs us about the signs and planets of the three Gunas.

Three Gunas on Our Minds

While talking about these three gunas for our mental health, it is characterised as follows:-

Tamas’ mind is disconnected, dull and lethargic. It is usually filled with ego and pride.

Sattva’s mind is about intelligence and manifestation.

It is expansive, progressive and beyond and is different from Tamas and Rajas.

A pure rajas mind is very self-centred and selfish when their Sattva with the rajas’ mind, the pursuit of achievements begins through the sense of organs.

In Ayurveda, there are three doshas or the body types around which the science of healing is surrounded.
1) Vatta
2) Pitta
3) Kapha

All these three doshas or the body types create the biological force in our body.

Dosha is a peculiar combination varying from each person. It is a combination of mental, emotional, and physical attributes, which includes their vitality.

Doshas are the energies that are found throughout the body, including the mind. They are one of the primary reasons for the functioning of our physical, mental, and emotional well-being. It is an individualistic roadmap to health and fitness.

Similarly, the concept of gunas comes together to form sensory, balanced thoughts, each with a different combination.

The elements of the Universe are associated with the doshas in Ayurveda, so are they with gunas

The elements associated with the Gunas are as follows.

The sattva personalities are as follows.

Rajas Personalities are as below

Tamas Personalities are as below

Below Are the Food and Diet of Sattva Rajas Tamas

SATTVIC DIET AS PER AYURVEDA

Sattvic food or the diet is an ideal and the recommended diet by many. It is a diet that does not include onion, garlic, or anything that is grown underground. This food creates lightness.

RAJASIC DIET AS PER AYURVEDA

Rajasic meals are heavy, rich meals and have a lot of flavours. It increases the heat in the body. It is a kind of food that is usually served in marriages and Indian functions.

TAMASIC DIET AS PER AYURVEDA

Tamasic food is towards an excess of spice, heat, not very rich though unlike Rajasic food. It usually consists of meat, fish, fermented foods etc. Tamasic food in excess could negatively impact the mind related to anxiety, anger, aggression, and dullness.

What Is The Best? Sattva Rajas Tamas Food

Sattva rajas tamas food has its relevance, and neither can be counted as one being better than the other. It is consumed as the profession one is into. E.g. The saints and the sages work towards calmness and enlightenment. Hence, they need to finish the suitable food for their work criteria (to put it in simple words).

E.g.:- A construction worker may consume more meat and heavy food because a day full of hard work, he necessarily does not want enlightenment, or he is not going to sit the entire meditating. He needs the energy to take on the heat and the hard work. However, a yogi or a sadhu needs to be in the present and be calm. He needs the energy to meditate and feel himself. Hence, they need a sattvic diet.

People with anxiety, excess nervousness and anger issues are usually told to consume a more sattvic diet, which helps calm the body and the mind and control excessive, impulsive emotions.

No matter whether your Guna is sattva rajas and tamas – if you can balance your emotions and actions, you can have a balanced personality. Your planets and zodiac sign may give you an idea of the dominant Gunas, but what you make of yourself depends upon your skill to balance your characters.