Rohit is tailor-made for the shorter formats and he will be the one to watch out for in 2017! 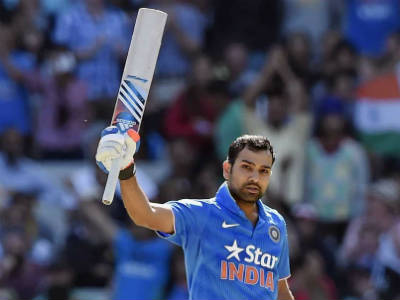 Rohit Gurunath Sharma, or simply Rohit Sharma is one cricketer who has grown into a sensational cricketer in the recent years. With a batting style, knack and skills that many consider will take him a long way in the world of cricket, and the Tendulkaresque influence that he may have especially absorbed during his playing days with the ‘Little Master’ in the IPL team – Mumbai Indians, Rohit makes for a very delightful batsman. He is the batsman with the highest score and most number of double-centuries in ODIs, with the best being a swashbuckling 264. Having achieved such phenomenal feats so early in his career, Rohit has set the standards very high for himself and also there are a lot of expectations from him to give India the required firepower in crucial situations. Even when it comes to the matters of the heart, Rohit doesn’t lag behind and has scored well. After his engagement to his bestie of 6 years – Ritika Sajdeh (a sports events manager), he has finally tied to know with her! But, what could be the script that may have been probably written up in the heavens? How will things be on-field? Will we continue to see the balls flying off Rohit’s timber? If you are worried about your marriage life, then get your marriage horoscope by date of birth.

[Owing to the unavailability of credible birth-time of Rohit, the analysis and predictions have been done on the basis of the Solar Chart/ Surya Kundli with the help of his birth-date and birth-place only.]

What Story do the planets Tell About Rohit and What Enables Him to Succeed as a Sportsperson?

Mixed Support From the Transiting Planets…