Akhilesh Will Face More Heat Within Party, But Will Be Able To Make His Presence Felt In UP Politics 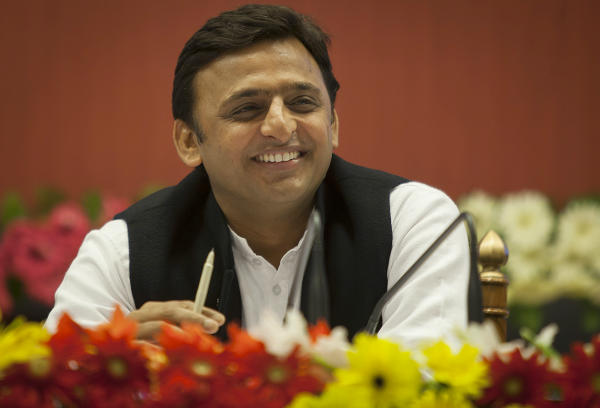 Akhilesh Yadav, son of the seasoned politician Mulayam Singh Yadav of the Samajwadi Party, became the Chief Minister of Uttar Pradesh in 2012. He was just 38 years old and the youngest CM ever of the biggest state in the country. Earlier, in 2000, he was elected a member of the Lok Sabha from the constituency of Kannauj. Akhilesh, who has a master’s degree in environmental engineering from the University of Sydney, Australia, was recently embroiled in an ugly family feud involving his uncle Shivpal Yadav, before Mulayam intervened and resolved matters. Uttar Pradesh, being the biggest state in the country, is a key state during elections, which are due next year. Ganesha peeks into his Oath Taking chart to conclude that Akhilesh’s troubles are far from over and he will face more clashes within the party early next year, but he will be able to make his presence felt in UP politics.

The Planetary Portrait On The Day Of Oath-taking Ceremony:
Gemini is rising in the Ascendant in the oath taking chart of Akhilesh Yadav as UP Chief Minister. The Ascendant falls in the dual Sign and in the star of Mars. The rift in Yadav family emerged all of sudden when the Ascendant Lord Mercury became retrograde. The conjunction of retrograde Mercury and Rahu in Leo intensified the disputes and shook the political scenario of UP.

Also Read:
Urjit Patel May Prove To Be Just The Right Remedy That The Indian Economy Needs Currently

Were Stars Already Indicating A Controversial Term?
The star Lord of both Ascendant and its Lord are retrograde. It clearly indicates that Akhilesh’s term as UP CM will remain very controversial. Though the controversy is settled, the challenges facing the government ahead of next year’s assembly elections are formidable. It will be difficult for him to repair badly dented image of the government and the party.

– Goes an American proverb. But, the strength of the Samajwadi Party seems to be diminishing by the day.

Disputes, Defection and Party Hassles:
Moon is placed in the 7th House in the star of Ketu. The star Lord Ketu is in the 12th House. The transiting Saturn in Scorpio and Sagittarius will remain difficult for Akhilesh government. So, the disputes may not get resolved easily. The period starting from February 2017 will remain crucial for the government as there are indications of yet another power clash.

However, Sun is placed in the 10th House and the transiting Jupiter is aspecting the Sun. So, CM Akhilesh will be able to make his presence felt in UP politics. But, the disputes and defection within the party may test his caliber.

Do you have some confusion about various areas of your life? Then Ask A Question and get expert guidance and effective solutions!