Sweet or sour? Ganesha predicts the fate of ‘Khatta Meetha’

Fasten your seat belts and get ready for a joy-ride as the duo – Akshay Kumar and director Priyadarshan are back with yet another supposedly rib-tickling comedy – ‘Khatta Meetha’. The duo, in collaboration, has created laughathons like Hera Pheri, Phir Hera Pheri, Bhool Bhulaiyaa, Bhagam Bhag and De Dana Dan. ‘Khatta Meetha’, which is releasing on 23rd July, 2010 is a satirical comedy film that revolves around a road construction contractor, played by Akshay Kumar. Trisha Krishnan, who makes her Bollywood debut after seven years with Tamil and Telugu cinema, plays his love interest. The film also stars the comedy kings- Asrani and Johnny Lever. What may appeal to the audience is the script of the film, which is based on real-life situations and thus the audience may closely relate to it.

Will ‘Khatta Meetha’ be able to tickle the funny bone of the audience? Will it cater to their taste and choice of comedy? Ganesha finds out with the help of Vedic Astrology. 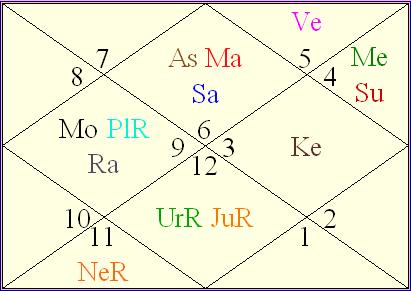 May the film bring sweet memories to the cast & crew of ‘Khatta Meetha’. Ganesha blesses the team.