Rani will need to create her own opportunities in the year ahead, says Ganesha. 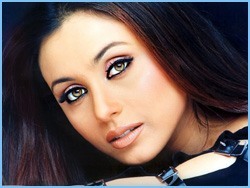 She is undeniably a great actress, a vivacious, versatile performer, and a powerhouse of talent. She is Rani Mukherjee, the petite, effervescent actress and a graceful lady who belongs to the illustrious Mukherjee-Samarth Bollywood family, and who debuted on the silver screen with a small budget Raja
ki Aayegi Baraat in the year 1997.

Once a favourite of Bollywood biggies like Karan Johar, Rani ignited the screen with her memorable performances in numerous roles in her heydays, and was viewed as someone with a great potential. However, despite that special spark and expansive critical acclaim she garnered, Rani, today, has been relegated to the background by a motley bunch of star progenies, glamorous beauty queens and plastic models. Her personal life too has been a cause of much speculation lately, and although, to Rani’s credit, she has managed to keep absolutely quiet about it, it is something that has affected Rani’s
aura as a Bollywood bee.

In the past too, Rani did come under the scanner for choosing wrong roles, for her allegedly screechy voice and even for her arrogance on the film sets, yet, time and again, she silenced her critics with her substantial, strong roles. Her last memorable role as a journalist in the real life sketch No One Killed Jessica was surely an act to remember. Her performance as a deaf, blind and mute Michelle in 2005’s spectacular movie Black remains her best till date. It was the same role that put her in the league of the gifted actresses of her time. The other notable films of her illustrious career include – Saathiya,
Bunty aur Babli, Kuch Kuch Hota hai, Hum Tum, Paheli and Kabhi Alvida Na Kehna. Rani has won a total of seven Filmfare awards, and her earnest fans have
always expected her to come up with a fiery performance.

Rani celebrates her 34th birthday on 21st March 2012. Will she be able to revive her flailing Bollywood career? Will she make a deserving comeback finally? And, when will she settle down in happy matrimony? Ganesha, with the help of Vedic Astrology, looks at the natal chart of this talented actress to predict about her future. 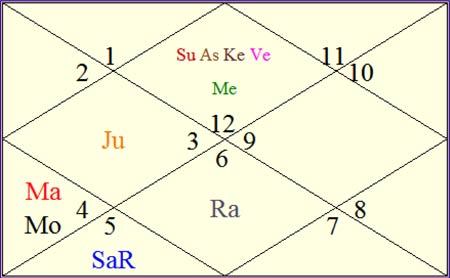 In short, as her powerful Natal planets are bereft of any major benign aspects, the year ahead looks dim and dull for Rani Mukherjee’s film career. She will need to create her own opportunities by being proactive and positive in all aspects of her life. Ganesha wishes her a very happy birthday, and
blesses her with His good wishes.