Seventeen long years have passed since she gave India its first Ms. Universe crown, but even today, her magnetism is unfailing and her beauty, timeless! Suave, sophisticated and SENsational – Sushmita Sen came, charmed and conquered, not one but millions of hearts, with her dusky looks, wit and candour! Best known for her stunning avatar in the film ‘Main Hoon Na’ and the ability to establish that Beauty DOES come with Brains, the Bong babe was quick to break many set norms. Although her success at the silver screen has been limited, she has managed to grab the limelight. So, be it the decision of adopting a baby girl, buying herself a one carat diamond solitaire or telling the world from rooftops about her personal life, she has gone out and done it all with an unusual courage and panache. The femme fatal has made news for her social/ romantic liaisons, alleged associations with men including Vikram Bhatt, Sanjay Narang, Randeep Hooda, Wasim Akram, Mudassar Aziz and Manav Menon and, more recently, for her venture. Her organisation called ‘I Am She’ sends delegates to represent India at the Ms. Universe pageant.
The alluring lady, Sush, turns 36 on 19th November this year. She is also all set to play the role of slain Pakistani Minister Benazir Bhutto, in the coming year. Ganesha, with the help of Vedic Astrology, looks at her natal chart to predict about her personal and professional life.
Sushmita Sen
Date of birth:- 19th November, 1975
Time of birth:- Unknown
Place of birth:- Hyderabad, Andhra Pradesh, India 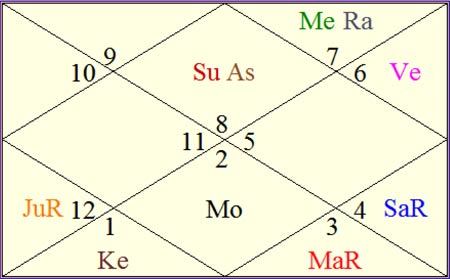 To put it in a nutshell, the year 2012 looks average for Sushmita’s career progress.
Ganesha wishes a very happy birthday to the very beautiful Sushmita Sen!