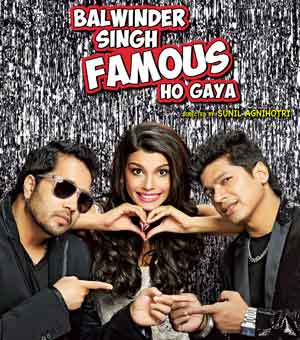 Balwinder Singh Famous Ho Gaya, is a Hindi feature film, which is made on a pretty tight budget. The unique selling point of this movie is – it’s a comedy film that is fully hilarious that star casts two great singers of Bollywood cinema Shaan and Mika Singh in the lead role, plus a bonus treat of watching gorgeous Brazilian model turned actor Gabreila Bertante on the silver screen. The story line revolve around the two lead actors – Shaan and Mika, both try to win the heart of the gorgeous Gabreila after coming to Mumbai. The funniest element is that both Shaan and Mika has the same name Balvinder Singh. The star cast also include Anupam Kher and Asrani, the two most talented comedians in Bollywood film industry.

Audiences will expect much from the songs, as two great singers are involved in the film, however, only time will tell how the songs will fare. Anyway, it will be a real treat to watch Gabreila performing to those dancing steps to the tune of Hindi music. Gabreila not only looks pretty, but stunningly hot. The movie is produced by Vandana Jain and Sunil Agnihotri, and directed by Sunil Agnihotri. It would be fun to watch the movie, and if it could really make the audiences laugh, what more can we ask from a tight budgeted film.