Stars or Snow? What lies ahead for Brangelina, post marriage? Ganesha takes a peek! 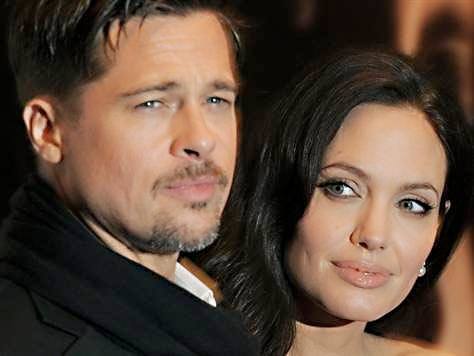 The much-awaited wedding of Hollywood was recently solemnised in a secret and very private ceremony. Brad Pitt and Angelina Jolie, Hollywood’s dream couple, tied the sacred nuptial knot in a private ceremony attended by 20 chosen guests. The couple, who has been officially named Brangelina, as an ode to their ethereal love equation, has been in a steady relationship since years and have 6 (adopted and biological) children together. The eclectic duo, also known to be very devoted to each other, started dating each other after their blockbuster movie – Mr. and Mrs. Smith – and have been together since. Together, they have been actively involved in social and noble causes, and their popularity seems to be soaring all the time.

People have been speculating their marriage since a long time. In April 2012, Brad presented a huge diamond to his sweetheart Angelina, which marked their engagement, and thus flared the rumours of their impending marriage. Despite the hoopla, the couple successfully managed to keep the media away and guessing, when the actually got married.

Now they are married, all we would like to know is how they would be together as a married couple. Ganesha, with the help of Kundali matching for marriage using Vedic Astrology, attempts to predict the future of Brad and Angelina’s relationship, post marriage. 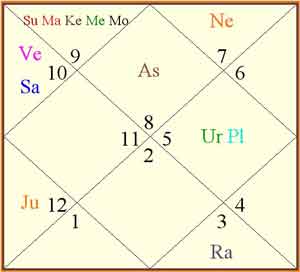 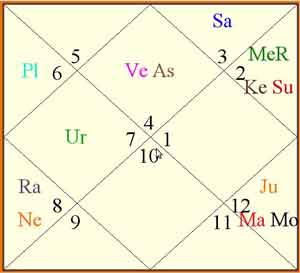 Ascendant factor
Ganesha observes that Angelina is born with a movable water Sign Cancer as her Ascendant Sign, while Brad is born with a fixed water Sign Scorpio as his Ascendant Sign. As this forms a ‘Trine’ between the Ascendant and Ascendant – thus, it should be, theoretically, a good and complementary compatibility. However, it is to be noted that a Scorpio Ascendant born partner i.e. Brad Pitt – will try to dominate Angelina, which will keep upset her emotionally – more so, because she is born with Moon too in a dual watery Sign Pisces.

Moon factor
Brad is born with Moon in Sagittarius, whereas Angelina’s Moon is in the Pisces Sign. This being Square between Moon in his Chart and her Chart will not leave the relationship free of ’emotional stress’. Angelina will have to patiently endure or ignore Brad’s expectations. This may cause frustration, specifically, sometimes, for Angelina.

Venus factor
The couple’s Venus are in opposite Signs. Opposites attract – yes! Nevertheless, Angie’s Venus is in Cancer and Brad’s Venus is in Capricorn. Both the Signs (Capricorn and Cancer) do not agree with each other at all. Thus, expectations in love are likely to be very very different for both of them, says Ganesha. Both of them will also have to see to it that their disagreements are not very apparent in their public behaviour or appearances. It would be ideal for both to understand each other’s emotional needs and try to find time, so that they both can spend quality time together, and keep their relationship intact.

Guna factor
Guna matching is a very important factor in Vedic Astrology (Matching of Horoscopes). In Ashtkoot for this couple, 21 Gunas match out of 36. Nadi Dosha also exists in this match. Their Varnas too are not matching. Thus, it is possible that post marriage, the couple may not remain very happy, with their respective careers. But, both will somehow be able to manage it well after facing some difficulties, because their individual horoscopes are very strong.

Will they be seen together in movies in the coming times?
They would surely be seen together in movies, because planetary positions are indicating that they would be viewed as the most romantic or ‘hot’ pair. Their inter-planetary combinations are indicating that ‘Mr. and Mrs. Smith’ (film they together starred in) will surely continue their acting journey together depending on their choice of roles of course. They will surely be able to perform very well (even post marriage) in films, which they do together.

All in all, since love exists in a good measure, Brangelina, post marriage, would try to cooperate with each other, but for sure there will be a sense of ‘competition’ too – especially at the subliminal level, because Venus to Venus opposition is found in their Charts (Angelina’s Venus in Cancer and Brad’s Venus in Capricorn). They should try following philosophy mentioned in Bee Gees’ song ‘You win again’.

There’s no fight you can’t fight This battle of love with me You win again So little time We do nothing but compete There’s no life on earth No other could see me through You win again Some never try But if anybody can, we can And I’ll be, I’ll be Following you

As couple is born with Jupiter in the same Sign i.e. Pisces, both will be able to manage this relationship well. Jupiter’s wisdom shall be coming to their rescue, they will also have to do some spiritual practice together, which will give them a sense of togetherness, besides being husband and wife or co-stars.

Rahu in Angelina’s Chart is in Scorpio. It is falling on Brad’s Ascendant. Ketu, Sun and retrograde Mercury in her Chart are falling on Brad’s 7th House in Brad’s Chart. This factor shall raise doubts, however, as to whether they are going to live together or will separate?
May they have a happy life, blesses Ganesha!