She was born on November 25, 1981 in Dallas, Texas. She got wrapped in nuptial bonds with Henry Hager on May 10, 2008. A Wake Forest University graduate and a member of Kappa Alpha Order, Hager worked as a U.S. Department of Commerce aide for Carlos Gutierrez and as a White House aide for Karl Rove. He is a native of Richmond, Va. 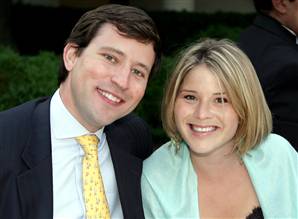 Jenna Bush has Sagittarius Ascendant and a charming Venus placed in the Ascendant. Her birth star Vishakha 3rd Pada is responsible for her beautiful features. The Ascendant Lord Jupiter is in exchange with Venus which gives her an attractive figure and this inherent Godly gift normally attracts men. She has a number of prominent Yoga (prospects) in her chart. Jupiter-Venus and Sun-Mars exchanges are the most noticeable among them. These Rajayogas give her name, fame, wealth and charm. No wonder Jenna was voted the 17th most eligible bride, taking “wealth and looks” into consideration, in Britain’s FHM magazine.

She got married on May 10, 2008, with Henry Hager, at her father’s ranch in Texas without the presence of media. She is currently passing through the Mercury-Ketu-Rahu period and Mercury is the Lord of the 7th house (house of marriage) in her chart. Adding to this the transiting Jupiter moving favorably in the Ascendant over the natal Venus aspecting the 7th house, indicates the occurrence of joyous occasion like wedding.

The Lord of the 7th house Mercury is placed in the 12th house and this cannot be considered good for conjugal bliss. Rahu is placed in the 7th house of the Chalit chart and Mercury the Ascendant Lord of Navmansa chart is afflicted by Rahu in the Navmansa. All these factors indicate disputes and differences with the life partner. On her wedding day Moon was in Pusya Nakshatra and afflicted by the debilitated Mars, Venus combust and Jupiter retrograde. The wedding date and Muhurtha cannot be considered auspicious. The period between March and September 2011 could be very tense and decisive for her married life.

Good luck and may Lord Ganesha help the couple maintain a stable relationship.