Debate Of Decades :- Can A Manglik And Non Manglik Marry - GaneshaSpeaks
https://www.ganeshaspeaks.com

Debate Of Decades :- Can A Manglik And Non Manglik Marry 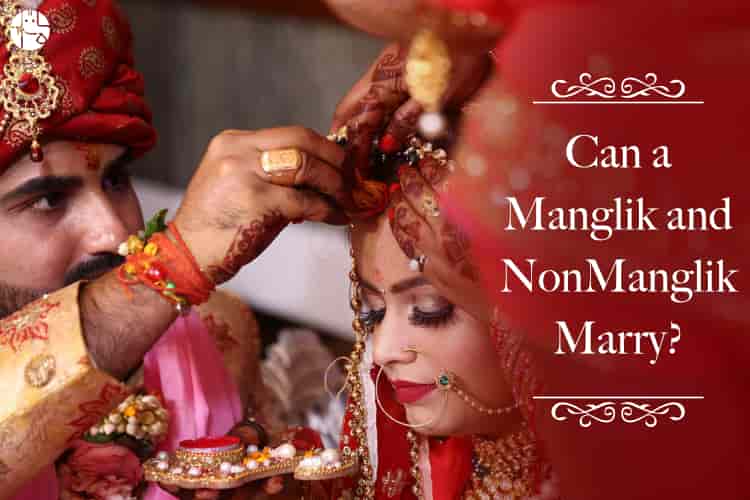 The famous and one of the most feared doshas for Marriage in Vedic astrology is a Manglik dosha. Alongside, the most feared question is can Manglik And Non Manglik Marry.There has always been a debate about can Manglik and non-Manglik marry or what happens if Manglik marries non-Manglik. However, the risk of a Manglik marrying Non-Manglik is at times exaggerated.The fear of a Non-Manglik partner facing an early death or divorce takes a huge place in people’s minds. Ultimately, Manglik and Non-Manglik couples face difficulties convincing their parents for Marriage even if it is a good proposal. But that is not the case always. At some point, you would have heard successful matrimony stories of Manglik and Non-Manglik people.

But it is still advisable that you should never neglect Manglik dosha if it is present in your birth chart if you are looking to get married.

What does being Manglik mean as per horoscope?

If the birth chart in a person’s Janampatri has the planet Mars placed in first, fourth, seventh, eighth and 12th house, it forms Mangal Dosha, or the chart is considered as Manglik in real sense.

Also read – How Mangal Dosha or an adversely posited Mars can affect you?

What are the effects of Manglik dosha on married life?

Mars may cause distractions, distance, separation or legal separation in married life. As Mars is a natural malefic planet that is aggressive and arrogant, it may harm the relations badly and cause destruction in relationships. Does a Non-Manglik person die or face ill effects after marrying a Manglik person? Let’s read the results of Manglik Dosha as mentioned below according to its placements.

How Can A Manglik Marry A Non Manglik

Mars or Mangal signifies energy, courage, and confidence in a native. Hence, it is considered a significant planet in Vedic Astrology. However, as Manglik or Kuja Dosha is concerned, it is deemed inappropriate for Marriage-related matters. Generally, a Manglik person for Marriage should be given priority for the opposite Manglik native.However, other planetary influences should also be taken into consideration before the denial of Marriage. There are some solutions for the Marriage of Manglik with a Non-Manglik person. If the opposite Non-Manglik native’s chart has a robust placement and influence of natal Saturn, both can marry.However, the compatibility of both the charts needs to be appropriately analysed before finalising the Marriage. Consulting an astrologer would give an idea about the effects and remedies for the same.

Does a Manglik dosha get cancelled?

It is important to note that any bad yoga or Dosha cannot be cancelled. But, yes, it needs to be neutralised to enjoy a hassle-free life. Balancing the Dosha will be beneficial to have a good life in the long term.

Remedies To Overcome The Manglik Dosha Before Marriage?

Below are a few remedies to be followed for a manglik to marry a non manglik.

In Vedic Shastras, some poojas are recommended, such as Mangal Dosha Nivaran Pooja can be done in the case of robust Mangal Dosha in the chart. Also, a Yantra can be worshipped after this pooja gets done.

How Can A Manglik Marry A Non Manglik:- Fast On Tuesday

This is the most straightforward remedy as fasting on Tuesday nullifies the effects of the malefic planets. The Manglik person should only have Toor Dal while fasting.

How Can A Manglik Marry A Non Manglik:- Kumbh Vivah

Kumbh Vivah is the oldest practice where the Manglik person is married to the Banyan tree, Idol of Vishnu Bhagwan. Kumbh Vivah is also performed by marrying off to the peepal tree, known as the immortal tree.

How Can A Manglik Marry A Non Manglik:- Navgrah Mantra

How Can A Manglik Marry A Non Manglik:- Wearing Coral Ring:

Wearing the red coral ring helps in obtaining the blessing of Lord Mars.

You can wear the red coral gemstone in silver or gold. The ring should be worn on Tuesday morning after dipping it in the holy water from the Ganges or freshwater.

You can purchase your Red Coral ring attuned by an astrologer.

While can a manglik marry a non manglik is a big debate, and everybody has a different take on it. It is always good to consult an experienced astrologer before making any decision just based on the Dosha. They can match the Kundalis of the boy and girl after carefully analysing their horoscopes to give suitable recommendations leading to a happy life.