Captain 'Hot' Kohli Will Be The Agent Of Glory For Team India, Predicts Ganesha 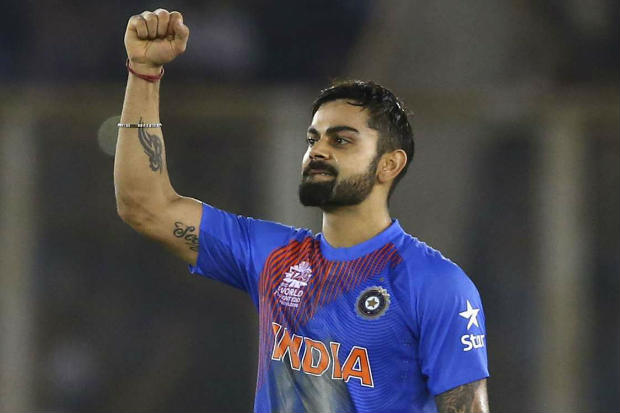 Virat Kohli is the man of the moment currently and all eyes are set on him. After being declared the captain even in the remaining formats of the game, there have been mixed emotions amongst the cricket lovers. The sudden announcement by  M.S. Dhoni about giving up captaincy from the shorter formats has evoked a lot of nostalgia, but on the other hand, the fact that the mantle has been handed over to Kohli makes us feel confident that Team India will scale greater heights and achieve the unthinkable. There are various theories and perspectives being presented about how cricket in India will be influenced by Kohli's leadership, so we prod Ganesha to analyse the Horoscope of the dazzling star and predict what lies ahead for him. Read on.
Virat Kohli
Date of Birth: 5th November, 1988
Time of Birth: 10:28 AM (Unconfirmed)
Place of Birth: Delhi, India
Natal Chart
Get Your Hand-written Janampatri By Our Experts.
Virat seems to be going through one of the most important phases of his career. What do the planets indicate?
Preceptor Jupiter ensuring that things become more 'Virat'
Ganesha notes that the current planetary alignment is working very highly in favour of Kohli. The transit of Jupiter through the 10th House – the House of power, status, prestige, ambition and success amongst other top aspects, is proving to be a divine blessing for him. This is the very transit that has blessed the intense Scorpio with the reigns of the captain in the other two formats as well. The year 2017 will be one of the most memorable years for the Delhi biggie.
Virat – the chosen one?
Saturn – which happens to be the Lord of the 3rd House in Virat's Chart is placed in the Ascendant and Rahu – the strong malefic is placed in the 3rd House. These two configurations are extremely favourable and provide Virat the extra edge. The strong influence of Saturn in the Chart makes Virat a rock-solid, technically sound, hard-working, reliable and consistent performer, who has been highly instrumental in scripting some of India's greatest triumphs. Rahu in the 3rd House  makes him a highly skilled sportsperson, who has a lot of handy techniques and tricks up his sleeve.
The highlight here is that Virat is going through the major period of Rahu and the sub period of Saturn, which has been working in his favour. This factor, coupled with the beneficial transit of Jupiter has blessed him with the top position.
What can we expect from 'Captain Hot'?
We can expect a surge of intensity, passion and aggression in Indian cricket in the months to come, says Ganesha. Let's not forget that Virat's Sun Sign is Scorpio and there is a very significant role of Mars in his Chart. Coupled with some other factors, Virat makes for a leader, who is fearless and the one who doesn't mind taking risks and trying unconventional strategies. With such determination and drive, he will be able to set new records.
The transiting Jupiter will continue to help him achieve glory and success. However, the transiting Saturn test his level of maturity, sense of responsibility and pragmatism.
A 90 day period of absolute brilliance
Mars – the planet which holds the highest importance in the life of a sports person, will be transiting through very crucial Houses and will add more speed to the proceedings and this will help Virat to perform with greater determination and firepower. He will be under the supportive influence of Mars in the period between 20th January, 2017 and 13th April, 2017. This will be a very crucial phase for him and his leadership skills will get a tremendous boost. His performance is also likely to be excellent in this period.
No looking back now!
At least till the next 4-5 years, Kohli will enjoy a golden run, feels Ganesha. His Birth Chart indicates a lot of potential and he will go a long way. In this journey, he will be able to win a lot of accolades in this phase. He will be able to lead the team with grace and dignity.
Matters of the heart:
Ganesha says that Virat may take a major decision regarding his love life this year. There are high chances of him pushing things a bit which will enable him to take the relationship to the next level. We may get some good news this year from Kohli!
With Ganesha's Grace,
Tanmay K. Thakar and Aaditya Sain
The GaneshaSpeaks.com Team
Your Birth Star or Nakshatra can reveal a lot about your nature and personality. Get the Birth Star or Nakshatra Report for FREE now!
Share