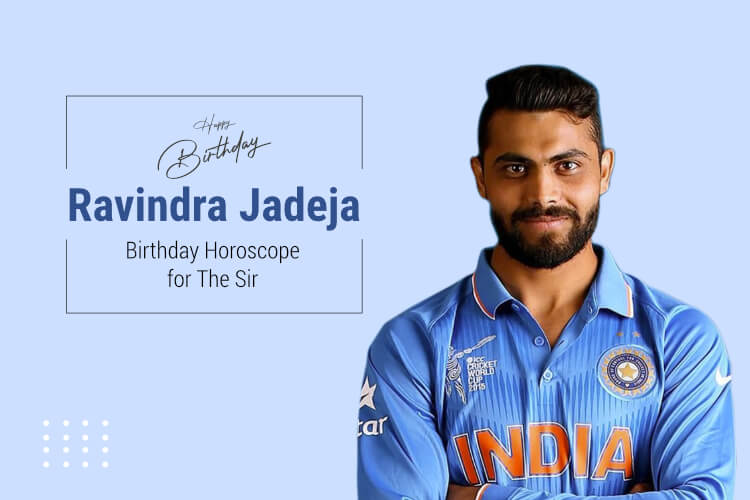 With a single tweet from Mahendra Singh Dhoni, Ravindra Jadeja once became a ‘Sir’ overnight. In the coming years, he would prove that titles come for a reason. Now an integral part of India’s Test squad, a reliable slogger in the middle who has helped the team accelerate scoring rate several times in the whites. In the current ICC rankings, he is ranked 2nd in the list of Test All Rounders, and 9th for one-day internationals.

He would be in top 5 fielders of the world as well if there were to be rankings for the same. Currently counted among the best fielders of the world, Jadeja sure adds unmatchable electric energy on the field. That golden arm is one of the most feared by the batsmen running between their wickets, no matter which corner of the ground Jadeja is throwing the ball from. In fact, fielding is one of the reasons why he has been a favourite choice of Captain Virat Kohli in all formats of the game

As the cricketer turns 32 on 6th December, we bring you an astrological analysis of Ravindra Jadeja’s Birth Chart. A peep into his upcoming year, a horoscope based on his date of birth. So without further ado, let’s dive in.

Find out how your personality and life is shaped by the positions of the planet at the time of your birth, with a Free Janampatri Analysis!

Ravindra Jadeja’s date of birth suggests that his zodiac sign would be Sagittarius. From his birth chart, we can see how the transiting Jupiter would aspect the natal Jupiter in the 7th house. On the other hand, the transiting Saturn would aspect Venus and the Moon positioned in the 12th house of the chart. The transiting Rahu will pass over the Sun and Mercury in the Ascendant. Moreover, Ravindra Jadeja will be under the influence of Mahadasha of Saturn and Antardasha of Ketu, which will end on 12th April 2021. After that, the Antardasha of Venus will begin. How will all these combinations of planets and their transits shape Jadeja’s 2021? Let’s see.

You too can know how your 2021 will turn out to be, with a personalised 2021 Highlights Report prepared by our expert astrologers.

Ravindra Jadeja Down Under

Now, Ravindra Jadeja’s IPL, his latest outing has seen him blast valuable runs with the bat. However, the sharpness with the ball was somewhere missing. Nevertheless, he has been called for the Indian Squad that will travel Australia in December 2020. During that period, Jadeja would be under the influence of Anatardasha of Jupiter, the lord of the 5th house (performance). Jupiter’s transition at the same time will aspect that natal Jupiter in the 7th house, boosting his performance in the T20s that he would play against Australia. In short, we are likely to see some sword-swinging celebrations in Australia.

Find out what this rare transit of Jupiter in Capricorn can bring to your life, with a personalised Jupiter Transit Report, handwritten by our expert astrologers.

Things to be Careful About

The Mahadasha of Saturn, Antardasha of Ketu, and the transit of Rahu over the planets positioned in his ascendant are likely to create a negative environment around him, especially when it comes to his health. Rahu may disturb him frequently, and he may have problems related to chest, exertion, fever, cold- cough, and headache. He may also need to be careful about a physical injury during his tour of Australia. Due to these astrological combinations above, he may also make some wrong decisions during the matches and disappoint his fans, despite the transiting Jupiter backing his performance.

How will your performance be at the workplace? Will 2021 be the year of professional recognition for you? Access your Career Report 2021 to find out now!

The stars, however, are shining bright for Jadeja when it comes to T20 World Cup 2021, which is to be played in India. Post 12th April 2021, he will be under the influence of Venus, which denotes art, techniques and performance. This will help him in getting selected for the world cup. In his Surya Kundali, Jupiter in the 7th House aspects the planets in the ascendant. This natal Jupiter is further aspected by the transiting Jupiter. On top of that, the transition of Saturn is also likely to work in favour of him. T20 World Cup 2021 may be the time for Ravindra Jadeja to shine and take the Indian team to new heights.

Does your birth chart have these favourable combinations as well? How planets and their transitions can benefit you? Find out now with a personalised Janampatri, handwritten by our adept astrologers.

We wish the happiest of the birthday to the man with the golden arms. May success come his way as fast as his throws from the boundary lines. Happy Birthday, Ravindra Jadeja.

To Get Your Personalized Solutions, Talk To The Best Astrologer Now!