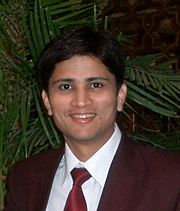 Introduction: Indian badminton ace Chetan Anand reached the final of the Belgium Open last week but had to remain content with a runners-up trophy only. Anand is now the top Indian badminton player in singles with a world ranking of 33, three places above his compatriot Anup Sridhar. Anand will be next playing in Bitburger, Bulgaria, Dutch and Danish Open. Here Ganesha throws light on the level of his future performances.

Astro Analysis
Ganesha notes that the fifth house of sport's Lord Venus is Swagruhi. It is associated with Sun which signifies fame and name. Sun is exalted in Navamansha And thus powerful. Mars, the planet of vigour and vitality is in Kumbha Navamansha. Mars is in Uttarphalgun Nakshatra ruled by Sun. Hence, his confidence and determination would be very high. These factors are favourable to his performances and is in favour of his sporting talent as well. He has a chance of achieving a satisfactorily higher rank during his forthcoming matches. All these are favourable planetary positions and promise to create the winning situation for him in the field of sports i.e. in badminton.

Transiting Jupiter will be forming a Trine aspect with natal Venus, the Lord of sport house, from December 2008. This point is favourable to his career progress during 2009. This will give him power to perform well and may create more winning situations but unfortunately Saturn is currently transiting over the natal Saturn. Saturn is a slow moving planet and has a tendency to slow things down. These factors denote hard times and victory can be achieved only after facing difficulties. Ganesha foresees that achieving further heights is very tough, especially, in competitions to be held between November 17 and December 30, 2008. In addition to this, the period from August 7 and September 8, 2009 will be difficult for him as per Ganesha's calculations. Except in the above mentioned unfavourable time he will play quite well.
Summary
Considering all these factors, in unfavourable time he may have to work very hard in order to achieve a higher rank and in the forthcoming Championship if the game is scheduled in said unfavourable time.

Good luck and may Lord Ganesha provide Chetan Anand with the required strength to win the forthcoming Championship.