Despite support from Jupiter, Rahane may not get due recognition owing to Saturn's influence! 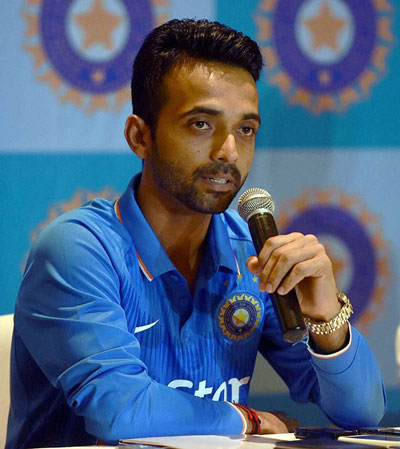 The constant tinkering of the batting line-up, especially Rahane's, has been having an impact on the Team's performance. Former India skipper Sunil Gavaskar blasted the Indian team management for their fickle-mindedness. Dhoni claims that the team management is looking to try out options before the World T20 and looking for the best possible line-up. But instead of doing any good, it has left players rather confused. So, what lies ahead for the unassuming, yet talented Rahane, who hasn't been able to prove a point with his potential yet?  Find out in the article...
Ajinkya Rahane: Indian Cricketer
Date of birth :-  06th  June, 1988
Birth Time :-   Not Known
Place of Birth :-  Ashwi KD (Ahmednagar Dist.), Maharashtra, India
SOLAR CHART

[Owing to the unavailability of credible birth-time of Rahane , the analysis and predictions have been done on the basis of the Solar Chart/ Surya Kundli with the help of his birth-date and birth-place only.]
Is the changing batting order the only reason for the lackluster performance of the talented Rahane, or are there any other reasons, astrologically?
Astrological Observation:-
Astrological Predictions:-
Ganesha wishes good luck to Ajinkya Rahane.
With Ganesha's Grace,
Rantidev A. Upadhyay
The GaneshaSpeaks.com Team
Share