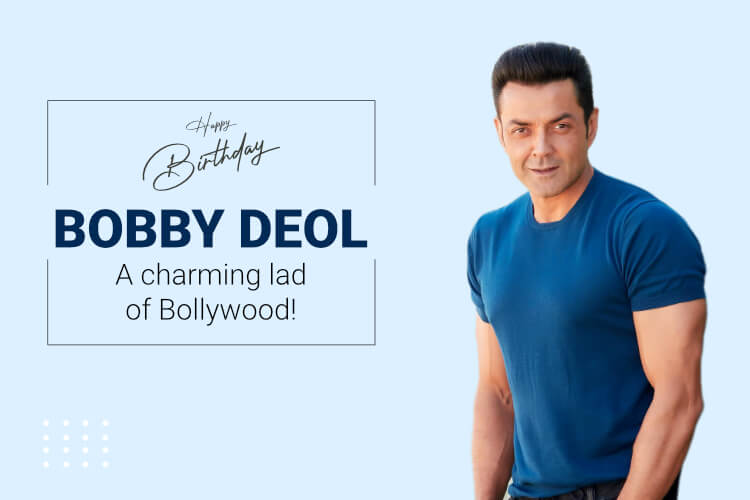 Back in the late 1990s, Bobby Deol, who was a rare one, could walk onto the screen with the background score ‘Gupt, gupt’ or ‘Soldier… soldier’ and had become synonymous with the visuals and sounds that defined popular Hindi films made a comeback after a four-year hiatus. The flamboyant boy, who was perhaps single-handedly responsible for making long tresses on men not only acceptable but also a much-coveted fashion accessory of that time, now bounced back drastically with movies like 83 and Asaram. And once again he has shown his acting prowess but in an entirely different manner. Today, there are very few leading men in the industry who could slip into playing Dean Vijay Singh in Class of ‘83 or a cult baba in Ashram with the fineness that Bobby Deol has displayed. Thus, in many ways, Bobby Deol perfectly fits Andy Warhol’s definition of an artist, who once described an artist to be somebody who produces things that people don’t need to have but want to possess. And, being an inspiration for the kind of comeback that he has made where he is merrily willing to play such characters that are out of his comfort zone and what made him the real Hero in every sense.

Now as the Deol scion turns 52 this month, let’s unveil his birth chart and take a look at how his 2021 is going to be according to his horoscope.

Do you know what your horoscope unveils about you? If not then find out with your Personalised Janampatri and get house-wise prediction based on the placement of auspicious and inauspicious planets in your birth chart.

The Bollywood star Bobby Deol is an Aries Ascendant, and according to his Surya Kundali, he is born with Capricorn to sign in the first house. He was a quiet heartthrob personality among the young girls in the 80’s. His hunky physique was the reason for his popularity. Thanks to the combination of Saturn with Taurus and Capricorn. And Sun in Ascendant. The Moon in the 9th house aspected by Jupiter of Taurus and Jupiter-Venus incorporation is the reason for his attractive look and white classy face. Aries Ascendant and Mars of Taurus is aspecting the 1st house, and Sun in the 4th house is the giver of a well-toned body. And, the presence of the Sun in the Ascendant house is the reason for his curly hair. As per his Chandra Kundali, the conjunction of the planets Jupiter, Uranus, Ketu, Pluto in the 5th house, and Moon in the 1st house aspected by Saturn enabled him to complete his studies. Besides this, he finished his commerce graduation with the help of Saturn. The planets which are associated with education are in the 6th house from its lord present in the 12th house, which forced the actor to slowly complete his studies at the different places.

The Sun in the 9th house of Chandra Kundali and the 10th house, and Lagna Kundali aspected by Jupiter of the 5th house helped the actor receive unconditional love from his father and his father also supported him in making his acting career. Bobby Deol and his father, a legendary actor Dharmendra both earned fame to their name. The Moon aspected by Jupiter and the destiny point in the 4th house enabled the actor to earn his mother’s love.

As per the actor’s Kundali, the sun’s presence in the 7th house of his mother and Mercury, (The Lord of 8th house) merged with Rahu in the 12th house give rise to several ups and downs in his mother’s marriage life. Albeit, the aspected of Jupiter in the 9th house never let them parted away. Also, the presence of Sun, Mercury, Saturn, Rahu, Venus, and the Moon present in the house of the family aspected by Jupiter cater happiness to his family. These planets also provide strength to the house of income and thus, the actor is an occupant of wealth and prosperity. Following the actor’s Kundli, the planets Mercury, Saturn, and Venus are forming an auspicious Parivartan Yoga as well as the house of wealth is aspected by Mars and the lord of wealth, Jupiter revealed that an actor has a good income but at the same time, he has the practice of spending spare money and hence the actor has unnecessary expenditures.

The presence of Rahu, Saturn, and Venus in the 12th house inspired him to fall in love with someone. Transiting planets, Saturn, Venus, Moon, and the house of the family aspected by Jupiter, are the reason why he believes in an arranged marriage. Later. On the 30th of May 1996, Bobby Deol got married to Tanya Ahuja, when Venus was in Pratyantar Dasha of Rahu’s Maha Dasha and Antra Dasha.

Sometimes our plans do not work as we thought, and despite our utmost effort, we don’t yield the desired result of our placed action. You know why? Because of the right time of events, thus availing of your Yearly report of 2021 will enable you to foresee the most opportunistic and challenging time ahead, and planning accordingly.

The Throwback of His Career As Per His Kundali

Bobby Deol started his career in the film industry at the period of Saturn- Rahu with the movie Barssat released on 29th September 1995. As per his Birth Chart, with the effective influence of Rahu and Saturn, he reached the crescendo of his thespian line of work during the period of Rahu Maha Dasha. In 1997, when his film Gupt came into the theater, the actor was serving the period of Mercury-Mars-Rahu. While in 1998, when his film ‘Soldier’, debuted, he was undergoing the period of Rahu-Mercury-Saturn. Thus, planets Rahu, Saturn, Mercury, and Venus enabled him to achieve a constructive end concerning his career. And thereby, the actor gave us many beautiful and heart-throbbing films in different genres such as Barsaat, Badal, Gupt, Bicho, and Soldier.

Bobby Deol Careers is in The Line of Progress As Per His Horoscope!

As per his Kundali, Saturn is passing over the Sun until April 2022, and adding to this Jupiter is coming to join the party in the 10th house, which will complete the transition in Capricorn by 5th April 2021. Thus, during this period the actor might expect a positive influence in his career. Both Jupiter and Saturn have 33 points, and thus the actor might receive some good opportunity and even get a new film’s offer.

Jupiter transit in Capricorn until 5th April 2021 enabled the actor to gain financially. And thereafter, from 5th April 2021 to 14th September 2021, Jupiter of Aquarius shall produce the constructive result from the 9th and 10th house of Chandra Kundli and the 11th house of Surya Kundali. Then, the planet Jupiter will again aspect the Aquarius from 20th November 2021 to 13th April 2022 and 14th September 2021 to 20th November 2021, thus whatever work will take place during this period shall earn a productive consequence for this career due to the presence of Jupiter in Capricorn.

The Influence of Rahu on His Birth Chart

The Transition of Rahu over the Moon until 12th April 2022 might increase his unnecessary expenditure and can even give rise to a severe headache. The impact of transit might also be seen during the month of Jan-Feb and Nov-Dec of 2021. In June and July, the actor’s rift with his children or parents may be possible. From January to April and from 14th September/ 20th November to 22nd April 2022, the actor’s father might engage in some new projects or even taste the favor of success related to his former work. His child growth also seems to be possible during this period.

The actor marked his presence in Bollywood with the movie Apne, and with the upcoming of Apne 2 on 2nd November 2021 during the period of Jupiter transit and Dasha, he can again regain the same respect as he has gained with the first film. The positive influence of Jupiter on the duo – son and father will bring fame and respect for both.

With Jupiter passing over the planet Mars-Venus present in Libra and also over the Sun, might bring him success to his work. Following his comeback film Race 3, he is likely to taste success till 5th April 2022. The favorably placed planets will help the actor to develop a new image in Bollywood. Or even may get an offer to perform in the biopic of a famous person.

The Discovery of New Self!

The influential sign aspected by the natal planet Mars from the 4th house and the Lord of karma, Rahu, and venus in the 12th house aspected by Jupiter reveals that his upcoming romantic and thriller movie “Love Hostel” might write the new language of success for this actor.

Until April of 2022, he will be under Jupiter and Rahu period, thus after this period, he can accept the offer of the same genre film though which he might discover a new to this success. During this period, whatever role he plays, be it a lover pal, or his villainous avatar, success will be sure for this actor.

A Testing Period of His Health!

In 2021, from the position of Moon, the 6th house is aspected by Saturn. Also, planet Saturn is passing over the Sun meaning that the actor might deal with severe mental issues or might feel exhausted during this period. He may undergo little health issues like stomach pain and headache but only for a temporary phase.

Find out what your health report of 2021 says about you.

We Wish this actor to have a successful and happy life ahead!