Budget 2010 will be progressive yet defensive, feels Ganesha

Budget 2010 is just around the corner and everyone is hoping to get some relief from inflation, in general, during the Union Budget for 2010 to be presented by Finance Minister Pranab Mukherjee in the Lok Sabha on 26th February. The common man has a lot to expect from the government in terms of sops and tax cuts. The industry experts are divided over whether our Finance Minister will fulfill the wishes of citizens or not.

Ganesha predicts Budget 2010 with the help of Vedic Astrology. 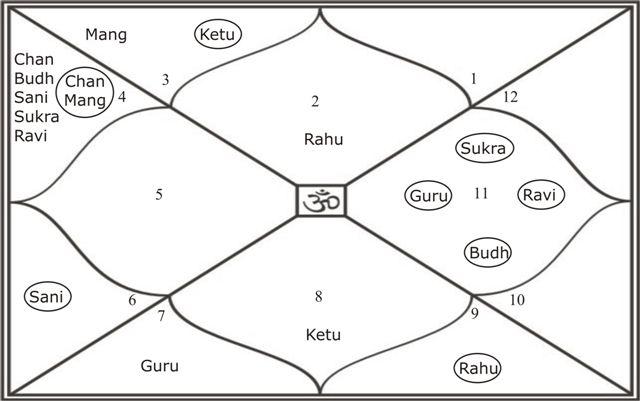 Ganesha anticipates that this year’s Budget will boost the floundering economy by focusing on fixing infrastructure, generating rural employment and providing incentives to sick sectors.

Horoscope of Independent India shows that Sun is in Cancer and transiting Sun is passing through 10th House of Aquarius and is in conjunct with Venus, Jupiter, and Mercury. Here the 10th House also represents the government’s natal House.

Also, as Sun is in the Satatarka constellation in 3rd pad and Satatarka represents Rahu on the day of Budget, Government of India is likely to take a strong stance on petroleum and gas products, silver, lead and steel. This budget is likely to have some bad news for home-makers as price of LPG shoots further up. The hike is a certainty as constellations are not supporting the product. Moreover, the Finance Minister may have to take some harsh decisions on pesticides. Power sector may experience the heavy shocks in the budget; products where atomic and other high maintenance source of energy are utilised may become more expensive. Electronic items like refrigerator and TV are likely to become a little more expensive too. Foreign liquor and beverages may also get dearer.

India’s Natal Moon is posited in Cancer. Moreover, on the Budget day, transiting Moon will be in conjunction with Natal moon in Cancer sign. This conjunction will take place in Pushya constellation in the 2nd pad. Cotton, wheat, turmeric, cable, machinery, chemicals, colors, fat will receive some valuable favour from the FM.

Natal Mars is posited in the 2nd House of Gemini and transiting Mars is passing through Cancer sign in the 2nd pad of Pushya constellation. Mars is conjunct with natal Moon, Mercury, Saturn, Venus and Sun. This suggests major reforms in the Railway Budget. The changes in prices of products like ghee, honey, computers, radios and jewellery.

Transiting Mercury and Venus will be in conjunction in the 10th House. Finance Minister may present the Budget keeping the Congress’s political agenda in mind. In this situation, Finance Minister may lionize Import-Export, Foreign Trade, National Growth and Rural Advancement. The Supreme Court may be bestowed with more powers. Some relief in Insurance sector is expected. Education will be affordable, but higher education will be pricey.

Saturn will transit through Virgo in Utarafalguni constellation. This will inspire our Prime Minister and Finance Minister to take some bold steps to curb inflation and improve GDP. However, despite some progressive steps, they may not get due credit. Saturn will trigger several changes in Grains, Edible Oils, Vegetables, Plastic, Mining Industry and Drug Manufacturing.

The 5th House represents stock market. After budget, there is likely to be a mood of caution at the bourses.

Moreover, Transiting Sun will be in 10th House of Independent India’s chart. Finance Minister is likely to address Tax Accumulation, Revenue Deficit, Fixed Deposit, Foreign Direct Investment Flow, GDP rate. But all this will not give any respite to the people. The central government’s policy to play safe may not work this time.

India has Natal Mahadasha of Sun – Antardasha is Moon’s Pratiantardasha Jupiter. Moreover, India is under the influence of Sun’s Mahadasha. Sun is Sukkesh, therefore Tax Collection, Corporate Tax and Agriculture sector may see a tax improvement.

Let’s have a sector-wise look at the budget:
Information Technology (IT)
As Transiting Sun is conjunct with Venus, Jupiter and Mercury, the government may have to give importance to the IT sector. The Sun is in Satatarka constellation, which is represented by Rahu, and will be influencing IT sector. Thus, if IT is ignored this time, the sector may suffer a setback. Therefore, IT should have a special mention in the budget. Research and development in the Information Sector may get further boost.

Automobile
Automobile sector is seeing a strong position of Venus and Mercury. So, this time automobile industry may receive some direct benefits. Ganesha also sees some progressive steps from the Finance Minister. Auto sector will rejoice the budget announcements and the industry has a bright future in India.

Pharmaceutical
Sun represent the Pharma Sector. Transiting Sun is going to enter 10th House of Independent India’s chart. India has Natal Mahadasha of Sun and Finance Minister will take decisive steps to encourage Pharma Industry, especially in their offshore undertakings, feels Ganesha. But the overall impact of the budget on this sector will be fairly neutral.

Retail
The Finance Minister’s briefcase is likely to hold a substantial promise for this sector. Policies determining the quality of material, gradation and consumer protection are likely to be formulated or consolidated.

Banking
Mercury is the planet that rules the banking sector. Transiting Mercury passing through the 10th House has become very strong. Moreover, decisive steps are expected to bring together all government and semi-government banks. The idea of Mega Banking Corporation is likely to get a boost. They can borrow funds at lower rates from international Banks and depositories. However, Mercury posited in the Dhanistha constellation is unrewarding and suggests a possibility of confusion in this sector. Also, Gemini sign is affected by Ketu and Virgo sign is affected by Saturn, so lower trading income and week credit growth will hurt the banking sector.

Infrastructure
Mars is transiting over natal Moon, Sun, Saturn, Mercury and Venus in the 3rd House. Mars is the lord of 12th House. Mars is transiting through 2nd pad of Pushya constellation and is retrograde. Thus, National Highways, Railways and Airport Authority of India can get a better security system. But, overall they may not be too happy with the budget. Privatisation and modernisation for Metros and Tier II cities will stay on course. With transiting Ketu afflicting Natal Mars, expect some decisive steps taken by the FM on the country’s leading ports.

Metal and Steel
Saturn, the Lord of destiny and industries, will be transiting through the 5th House in India’s birth chart. The 5th House represents stock market, investment, production capacity of India. Saturn is passing through 4th pad of Utarafalguni constellation. From astrological point of view, the slow moving Saturn will put pressure on base metal prices.

Entertainment
Venus represents the Entertainment sector. The conjunction of Venus with Jupiter, Sun, Mercury and Venus pass through the 2nd pad of Purvabhadra. Growth of Radio Stations is likely to continue. Broadcasting Companies may express some concern. But overall, expect announcement of simpler and favourable Tax policies by the FM.

Telecom
Mercury represents the Telecom sector. Mercury, the Lord of the 2nd and 5th House, is posited in the 3rd House of India’s birth chart.

The 3rd House represents telecommunication. So in India telecommunication is always going to be a profiting sector. Transiting mercury passes through 10th House of the 3rd pad of Dhanistha constellation. This indicates a lot of unexpected changes in this sector. However, Custom Duty is likely to remain untouched by the central government.

Breakdowns or breakthroughs, what’s with your business in 2010?