Will Indian Economy Pass The Acid Test In 2018? Know What Ganesha Says 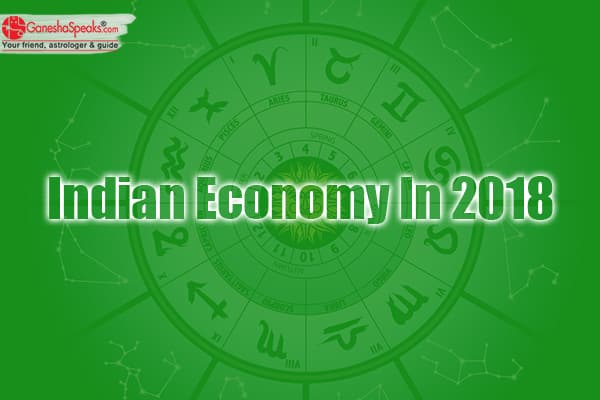 (Image Source: Internet)
During 2017, the Indian economy saw some ground-breaking events that shook up the markets like rarely seen ever before. The year kicked off still reeling from the withdrawal symptoms of demonetisation, imposed on November 8, 2016, in which the Rs 500 and Rs 1000 notes were banned without any forewarning, stunning black-money hoarders and causing a lot of  hardship to the common man, who took it on his chin knowing that the momentous decision was well-intentioned. Towards the middle of the year the GST bill, the biggest tax reform since Independence, was introduced. The idea was to replace the myriad taxes at every level, from the assembly line to the consumer's home, with one single tax. After some initial hysteria and confusion regarding its implementation, among manufacturers and retailers alike, GST rolled out smoothly. Both these moves, in addition to the government's decision to make it mandatory to link Aadhar number with PAN cards, sound like the death knell for the black market, also referred to as the parallel economy. The impact of these three moves was felt throughout 2017 and was by and large positive and well-received by the general populace. The broad consensus is that the impact will be felt even more emphatically in the upcoming year 2018, but does Ganesha concur? Read on to find out Ganesha's predictions for the Indian economy in 2018.  Do you want your business to surge in 2018? Avail the Free 2019 Business Report and make your business grow.
Independent India's Horoscope
Date of Birth: 15th August 1947
Birth time: 00:00:00 (Midnight)
Place of Birth: Delhi, India
Birth Chart

Placement Of Rahu Cause Of Rampant Corruption

Taurus is rising in the Ascendant of India's country chart, which gives the nation stability, a great deal of endurance, latent power and energy. The placement of Rahu is prominent in the Ascendant, which may be held responsible for the rampant corruption in our country. Rahu indicates double standards, loose morals, selfishness, and hypocrisy. Ketu is placed in the 7th House. So India has always had a strained relationship with its neighbouring countries. The concentration of five Planets in the 3rd House is forming an extraordinary Yoga in India's chart, which tells the story of India's stupendous growth. It is, in fact, a driving force for the country. But, it also indicates that the common people of the country will not wake up until they are completely disregarded or humiliated.

Expect Good News From Jupiter In 2018

In India's horoscope, Jupiter will transit in the 6th house, which will be favourable. Hence, the performance of National Security, Chemicals & Fertilizers, Health & Family Welfare, Textiles, Labour & Employment sectors will be good. Moreover, the 6th house is also related to commercial affairs. It rules the wage workers, employees, and their general health and well-being. Labour strikes and other types of labour problems fall in this domain. This house also depicts the attitude, efficiency and culture of the employees. Legal matters are governed by this house. It also depicts the position of the country to meet its liabilities. Besides, Jupiter's 7th aspect on the 12th house is auspicious for foreign policies. Investments of MNCs will also increase. FII may be slightly volatile, and changes in the economic yield are also indicated. On the whole, Indian GDP may grow faster in the coming years. India may surpass UK and French economies in 2018 and become the fifth largest economy in the world. India may grow economically. But if you want to know your financial future, buy the 2019 Finance Report.

Sectors That May Throw Up Negative Results

Lord Saturn will transit in the 8th house during this year, which will be negative for Mines, Petroleum & Natural Gas, Steel & Coal sectors. The 8ht house signifies earnings from investments, liquidations of disputed assets, and the country's reserves. The 8th house also stands for speculative ventures, capital gains taxes and benevolent policies of the country. The transiting of Saturn in this house under affliction is considered unfavourable. Saturn signifies old age, so the important personalities and elderly persons suffer greatly. The trades impacted by Saturn, such as animal hides, skin, leather etc. will show negative growth. The dealers of steel & steel industry will be badly affected. There are curtailments of activities in these fields. The government may also impose certain restrictions. Also read about NSE's new index.

The Riskiest Sectors Which Need To Be Avoided

In India's horoscope, 5 major planets – Moon, Mercury, Saturn, Venus and Sun -- are posited in the 3rd house. The 3rd house governs first-hand contacts of the country with the general public, inter-office communications, specific information disseminated within the country, management information system (MIS), transportation and communication departments, receipts, tours and travels. Moreover, you will witness lots of ups and downs in Information & Broadcasting, Railways, Heavy Industries, Road Transport & Highway sectors due to the transiting Rahu. Hence, stay cautious while investing in these sectors.

Challenging Phases For The Indian Economy