Know What Makes You So Damn Annoyed based on Zodiac Sign 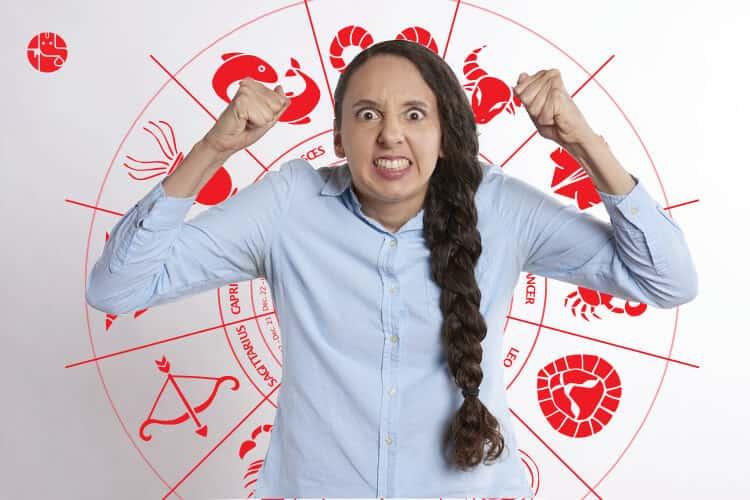 We as humans, easily get annoyed in different situations and circumstances! We all have our weak points to which we easily give up. One of the frail points that may not be under our absolute control is irritation and the act of being readily annoyed. However, various aspects have to be considered while dealing with them, especially when we compare different zodiac signs, their personality and the traits that they carry with them.

Some people easily get annoyed but some stick to the ground and practice a lot of patience. Still, there comes a point where everybody gives in and loses it big time! Depending on the characteristics, each zodiac sign behaves distinctively when it comes to being enraged and ruffled by others. Let us have a look at the facts about your zodiac sign, how each sign gets pestered and what drives them crazy!

Well, Well, Well! These guys are known to be quite aggressive, impulsive and self-centered. Not that these are pessimistic traits, but it can be a task to pacify them if they are in a fretful state. Besides, the zodiac sign of Aries is ruled by the planet of Mars which is affiliated with being uncouth, reckless, disruptive and loud. Arians do not like to be dependent on others at any cost. So, intruding in their personal space can annoy them in no time. Therefore, it is of the best consequence to not dictate them. While Arians hate the “bossy-attitude”, they are also very confident and hence, they abhor people who complain in loads.

Have an insight into the interesting facts about Aries

Although people associated with the sign of Taurus are affectionate and oversensitive themselves, they refrain from liking those who are very dramatic. Moreover, a change in their schedule can irritate them the most as they are not a big fan of altering their routine as such. So, next time you tell a Taurian to reschedule their plan in a dramatic fashion, it’s a total no-no! They are ruled by the planet of Venus which is immodest in nature but amiable and benign at the same time! It is the same reason why Taurus are so secretive as well!

Have an insight into the interesting facts about Taurus

We all know how creative and communicative Geminis are, which is why they hate being around boring and unimaginative folks! Ruled by the planet of Mercury, they are quite fanciful, witty and inconsistent at times. Thus, conversing with soulless people and those who are dry as dust is not their cup of tea. Now we know why Geminis get so annoyed. They need their brain-juice all the time!

Have an insight into the interesting facts about Gemini

Cancerians are compassionate, sensitive and highly receptive. For them, keeping up with relationships matter the most and if you are someone who is going to betray them, then make way for a burst of anger and irritation. Since they are ruled by the planet of Moon, they can be agreeable and adaptable, but if you are a traitor then god help you for they can then turn out to be vulgar too!

Have an insight into the interesting facts about Cancer

People associated with the sign of Leo are egotistical, assertive and vibrant in nature. You can easily tick them off if you become envious of others. They feel that one can shape their own destiny and reality and if you envy people, they will surely roar back like a lion. Another thing that pisses them off is niggardliness because they themselves are quite generous and magnanimous. Thus, it is quite clear now as to why Leos get so annoyed, at times. So, think twice before you come out as stingy in front of Leos!

Have an insight into the interesting facts about Leo

Virgos are very faithful, analytical as well as judgemental. Even though they are popularly known to be patient, some things get on their nerves with the likes of being mean and rude. Since they are ruled by the planet Mercury which makes them quite sensitive and eloquent, they won’t stand a second if your behavior is unwelcoming or mean! Another factor that annoys them the most is being disorderly and messy. Moreover, they like things to be perfect as they are hardworking and feel way too responsible for anything and everything revolving around them!

Have an insight into the interesting facts about Virgo

The sign of Libra is denoted by the scales, which is why justice is very dear to them. They will throw you off-guard if they realize they are a part of an unfair and prejudiced system. Despite being ruled by the planet of Venus that is affiliated with cheerfulness, gentleness, warmth, and tenderness, if you mess around with Librans they will quickly turn into discourteous and unvirtuous beings that can rip you apart. So better not exasperate the Librans!

Have an insight into the interesting facts about Libra

The charismatic and passionate Scorpions can turn out to be deadly if you are a falsifier or deceiver of sorts. Nothing annoys a Scorpion more than an impostor who deceives people. They are ruled by the planet Mars, which means that they can be aggressive, combative, reckless and quarrelsome. Thus, if they find out that you are a liar then it’s either you or them in the battleground. And mind you, forgiving people is not in their genes!

Have an insight into the interesting facts about Scorpio

These folks are gregarious, sociable, restless and blunt at the same time. A good combination to not pick up an argument or annoy them at any level! Even though they are also famous for being generous and optimistic, it will irritate them the most if you keep them stagnant, inactive or inert. This sign is ruled by the planet Jupiter, making them abundant, indulgent and unimpeachable in their essence. Hence, boredom can drive them insane and because they are so straight-forward, they can express this in your face with no regrets!

Have an insight into the interesting facts about Sagittarius

Capricorns are ambitious, persistent, practical and a little serious by nature. They are ruled by the mighty planet of Saturn which makes them conservative, immovable, apprehensive and pragmatic. Thus, one thing that inevitably annoys them is not being productive. Having traits associated with being prudent and callous, they may not even think twice to lash out on you, if they reckon that you are wasting their precious time! Moreover, because of the same reason, they do not like people who cling on to them as well.

Have an insight into the interesting facts about Capricorn

These folks are independent, unconventional, a little noncommittal yet quite intelligent in nature. They are easy-going as well, however, if you deprive them of their freedom then the situation may turn out to be a little tricky and things may get out of hand! You act around like a boss in front of them and they will split you down the middle! Additionally, they are also quite awake and analytical. As a consequence, one more thing that they do not entertain is unawareness and stupidity for they do not believe that “ignorance is bliss” at all!

Have an insight into the interesting facts about Aquarius

Pisceans are popular for being peaceful, thoughtful, imaginative and sentimental but some things can antagonize and irritate them. One of the things that can drive them up the wall is when someone is being too rigid and unkind to them. As they are so compassionate and empathetic by nature, they expect others to behave like that as well. It also annoys the Pisceans when someone is not able to reciprocate with them. This observation may not only get under their skin, but they will also run away from the person who does not comprehend them!

Have an insight into the interesting facts about Pisces

Thus, now we know what characteristic ticks off each zodiac sign according to their personality and traits that they possess. Can you relate this with your zodiac sign too? Share this article with your friends on numerous social media platforms if it connects with you. Let them know what irritates them, and annoy them all the more!