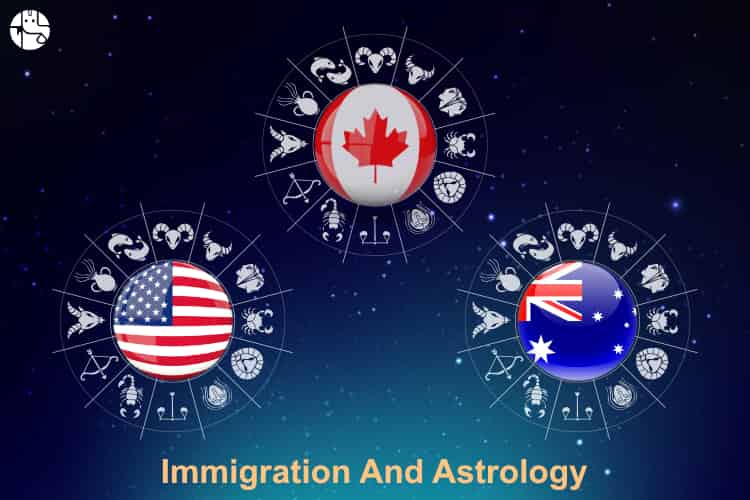 Foreign settlement in Vedic astrology can be a dream come true, particularly if you have been working hard to improve yourself outside of your home country. In today’s world, young people want to leave their hometown to establish a stable career and family life.

In the realm of Astrology, all houses, planets, and their combinations have their own significance and a role to play. The attributes and circumstances of everything and anything in life shift as a result of these factors. Planets and houses have such significance in foreign settlement Vedic astrology.

If we look at specific aspects like career, marriage, business, and numerous other dimensions of life, then astrology may play a key role in predicting the possible future. Similarly, the challenges and uncertainties related to a person’s settling abroad astrology can also be analysed through the lens of Indian Vedic Astrology.

Some specific planets and houses have an effect on a person’s chances of going out of the country. For example, we can know if one is going to travel abroad for entertainment, settlement, or business purposes. This is where Vedic astrology foreign settlement, as well as foreign travel horoscopes, comes into the picture.

Let us look at how Abroad Settlement in Astrology can be connected!

There is no unique planet that encourages people to fly internationally or do foreign settlement astrology. The meaning of travelling abroad is ruled by a constellation of planets with specific ownerships.

You may not believe this but sometimes, travel destinations are based on your zodiac signs. And you never know where life takes you.

Even then, if a planet is to be chosen as the primary planet for international travel, it is the ‘Rahu.’ Because, by nature and symbolism, Rahu is alien and exotic. When Rahu is in the ninth house (long-distance travel) or the twelfth house (foreign land), the native is compelled to travel abroad.

The other planet is Ketu which is in charge of international travel. Ketu has the power to compel a native to leave his homeland and relocate abroad. When Ketu afflicts the house, the native may travel abroad rather than staying in the homeland.

Now, as far as abroad settlement in astrology is concerned, Rahu, Ketu, Moon, and Mars are some of the important planets that help in foreign travel. Besides this, the lords of the significant houses also take part in a major role in settling abroad astrology. One can get permissions associated with a student visa, business visa, or work visa because these planets and certain other combinations with the houses can aid one in foreign travel and settlement in astrology.

There are certain measures that one can take to solve their problems related to foreign settlement Vedic astrology. Talk To An Astrologer who can assist you further!

Vedic astrology foreign settlement is guaranteed by some houses, which is why when an expert astrologer sees a Kundli, they look for such planets and houses that are more favourable in such cases.

When your foreign settlement is for a short journey, then the 3rd house is involved as per the foreign travel astrology. This 3rd house is 12th from the 4th house and usually denotes short distance journeys.

To add further, the 8th house also functions as a crucial factor. As this house is 12th from the 9th house, it signifies sudden gain in a foreign land like in investments, which in turn increases the possibility of travelling abroad to a foreign land.

The 9th house specifically heralds long journeys over water. This house provides opportunities for long journeys, as per foreign travel and settlement in astrology, which is why this house is essential in knowing if a person is going to travel out of the country.

The 11th house is affiliated with the fulfilment of wishes. If a person may have a strong desire and get fulfilled, it may be because of a strong 11th house. This is the house for wish fulfilment. Whatever the purpose of travel, the 11th house always remains important in travelling.

The 12th house, again, also plays a major role with respect to Foreign Land and settlement as it points out travel and PR in a foreign land.

Foreign Settlement in Vedic Astrology and Zodiac Signs Related to It

The movable, common, and fixed signs are the three main types of signs.

All movable signs have the best chances of foreign settlement astrology, while common signs only travel abroad for a short time. Fixed signs, on the other hand, have a slim chance of settling outside permanently or even temporarily. Furthermore, movable signs with the 12th and 9th Houses get more assistance while settling abroad.

Certain combinations of houses and planets can lead to going out of your country. Not just this, these houses or planets can also tell as to what house is associated with what particular kind of objective too!

Whatever travelling purpose, it is, in any case, the 4th house and its lord must be affected in a way that it may promote foreign travel. This is because the 4th house is concerned with taking a person away from its native or motherland.

As far as higher studies abroad are concerned, if the lord of the 4th, 5th, 8th, 9th house, and their respective lords make a combination with the 12th house, then the person may get the opportunity to get a Student Visa.

Furthermore, the 8th house indicates Research; hence, if there is any combination of the lord of the 8th house with the 9th and 12th one, the individual may pursue research work in a foreign land. If the Lord of 6th house and 10th house make a combination with the 9th and 12th house, then the probability of the individual to go abroad for work/ job purposes increases.

Travelling abroad is one of the most cherished dreams for a lot of people and for some, it’s a vision to settle there, check if your chances are high to go to foreign.

Apart from the houses, planets like Saturn and Rahu, along with their placement in the 12th house, may also indicate foreign travel. Therefore, with such houses, planets, and their specific combinations, an individual may get the opportunity to go abroad, and this can be very much foreseen with the help of settling abroad astrology!

How Can We Know About Vedic Astrology Foreign Settlement Yoga in Horoscope/Kundali?

When several Yogas appear in a horoscope, they cause the native to move from his homeland to a foreign country.

Between Mercury and the Sun, an arc is formed. The greater the angle, the greater the likelihood of a native travelling abroad. When Ketu afflicts the second, fourth, and seventh houses, the native has the opportunity to foreign settlement Vedic astrology.

Saturn requires the native to go abroad if he or she works in the houses associated with a foreign country. Aside from these planetary combinations, there are plenty of other planets that can lead to effective international travel based on foreign settlement astrology.