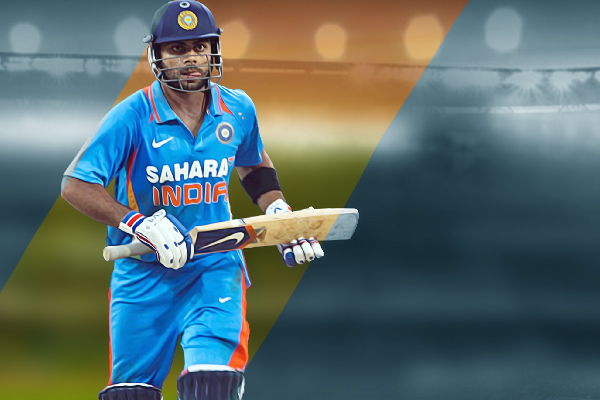 With a century and three 50’s in the just concluded ODI series against New Zealand, the indomitable Virat Kohli emerged top scorer of the series, and spent the richly-deserved Diwali holidays in Goa to rejuvenate himself for the more gruelling home series coming up against England from November 9. Kohli is already being hailed as one of the best batsmen of contemporary cricket. Expectations are running sky-high: the rate at which he is scoring his runs, it seems that he will soon be spoken of in the same breath as Sachin Tendulkar, Brian Lara and Don Bradman. As he turns 28 on Saturday, Ganesha analyses his horoscope and predicts that, barring injuries, Kohli’s incredible run will continue till at least September 2017.

What do the stars indicate about the shining star?
The Astrological Highlights:
Jupiter is transiting over the Natal Moon and Venus in the Sign of Virgo. Saturn is transiting through the 12th House. Post 26th January, 2017, Virat will be under the influence of Saturn Return phase. Till August 2017, he will be under the influence of Rahu-Ketu half return phase. The thing to be noted here is that the transit of Jupiter will be in Virat’s favour till around the next 5-6 years.

What do the planetary configurations indicate?
According to Ganesha, there are a lot of things that will be working in Virat’s favour in the coming months. Apart from the favourable transits, the operational major-period of Saturn and sub-period of Rahu will provide the required firepower to the young gun. Both the major and sub period Lords are well posited in his Chart, thus, he can be assured of great support from them.

It is often discussed how well Virat has mellowed and improvised his gaming style. But this aspect can be attributed to the strong influences of both Mars as well as Saturn. The prominence of Mars in the Horoscope explains his aggression and a fiery approach, but an almost equally strong Saturn indicates learning through experiences and a stronger emphasis on self-development and self-improvement. So, we can call it the grand fusion of energies, resulting into a wonderful synergy of ‘calculated aggression’, says Ganesha. Are the planets aligned in your favour too in matters related to career? How to improve your scoring rate in career? Get the answers in the report – Career Ask A Question.

The Prospects In The Year Ahead:
According to Ganesha, Virat may keep getting better with each match. He will be a lethal force for India in the matches. Jupiter, transiting through the midheaven indicates greater recognition and honours coming his way. All the efforts that he may have put till now will payback well. His performances are likely to be good even in matches that India plays abroad.

New records to be broken?
It will not be surprising to see him shattering a few more records considering the way he has been playing. But, this aspect is also getting confirmed by the planetary configurations currently. He will be able to deliver well and may continue to rise to various occasions. In this process, he may achieve new milestones and break new records.

Relationship Matters:
Jupiter’s transit through an important sector will help Kohli gain more stability in the matters of the heart and in the coming year, we may be in for some good news from the dashing cricketers regarding his relationship.

Words of Caution:
There’s a lot more that will come his way in the year ahead, says Ganesha. However, he will have to be careful in the period between February 2017 and May 2017 as some fitness issues may impede his progress.