Carolina Marin has the edge over PV Sindhu in the Rio badminton final, but only by the breadth of a hair, feels Ganesha 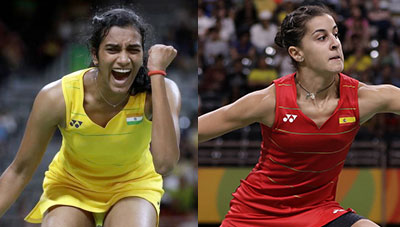 The women’s badminton final match today evening at the Rio Olympic Games between India’s PV Sindhu and Spain’s Carolina Marin, is slated to be a rip-roaring clash between two of the fiercest women’s shuttlers in the world. Both had sensational wins in the semi-finals — Sindhu crushing Nozomi Okuhara of Japan 21-19; 21-10; and Marin beating defending champion Li Xuerui of China 21-14, 21-16. With Sindhu on the threshold of history, for no woman in India has ever won a silver medal in the Olympics, leave alone a gold, all eyes in India will be riveted on the match. Sindhu is just raring to go, having dared Marin that her best is yet to come. Ganesha peeps into their charts and the match-time’s chart to conclude that it will be a neck-and-neck match with Marin having a slight edge.

Prediction:
As per Ganesha’s view, this match between Carolina and Sindhu is going to be extremely exciting. Both the players are born with Mars in Leo, and thus a fiery performance can be expected from each of them. Both are likely to be determined to prove their mettle. As Carolina is under the influence of Jupiter return phase and as Moon’s transit is more in her favor when compared to Sindhu’s, Carolina stands a better chance of wining against Sindhu. However, the match time’s Jupiter and Mercury transit are in Sindhu’s favor. In such a case, this Sindhu vs Carolina match indicates 49% vs 51% chances of winning, respectively.