The ageless tennis star does it again! What lies ahead for Leander Paes? - GaneshaSpeaks
https://www.ganeshaspeaks.com

The ageless tennis star does it again! What lies ahead for Leander Paes?

Leander Paes is a highly successful and respected professional tennis player from India. He generally plays in the doubles events on the ATP Tour and Davis Cup. Leander is regarded as one of the best contemporary doubles players of the game. Paes has also received many awards for his outstanding contribution to tennis in India. This great tennis star is chronologically the oldest man to have won a Glad Slam title in the world. Recently, he consolidated his position further when he yet again defied his age by clinching the mixed doubles crown with his Swiss partner Martina Hingis at Wimbledon, claiming his 16th Grand Slam title. Seeded seventh, 42-year-old Paes and Hingis completely thrashed Austrian-Hungarian fifth seeds Alexander Peya and Timea Babos 6-1, 6-1 in the mixed doubles finals in Wimbledon 2015. This is the fourth time Paes has won the mixed doubles title at the All England Club. Ganesha took this opportunity to congratulate the illustrious man with an indomitable spirit, and also to look what lies ahead for him in his career. 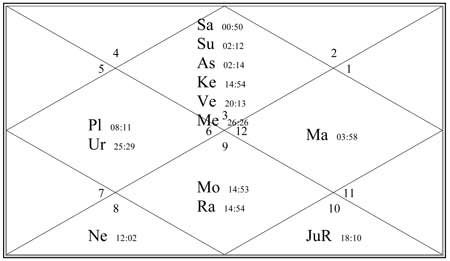 Owing to the unavailability of the Birth time of the celebrity, the following predictions have been done basis his Solar Horoscope.
Astrological Predictions
Q. How long will this ageless wonder of the Indian tennis go on?

Q. What does the future have in store for 42-year-old Leander Paes, now that he has clinched 16 Grand Slam titles in his life.