Difficult times ahead for Lalit Modi…or some respite?

BCCI slams life-ban on LALIT MODI – IS IT THE END OF THE ROAD FOR HIM? 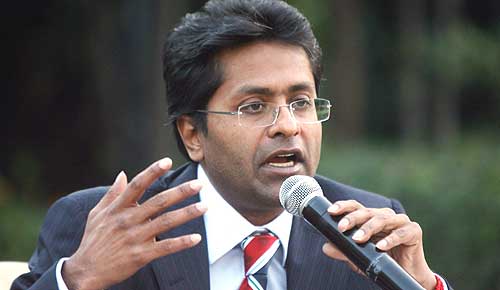 BCCI recently imposed a life ban on Lalit Modi, the former chief of the indian Premier League, as a result of which he will not be in a position to get involved in any role or initiative connected with BCCI in the future. His rise in the cricketing fraternity had been like a phoenix. Modi came from nowhere, and achieved a lot of fame and glory for initiating the Indian Premier League (IPL). He also occupied the position of Vice-President of BCCI from 2005 to 2010. The success of IPL was largely attributed to him. However, Lalit Modi was later suspended from the position of the Chairman and Commissioner of IPL on the charges of malfunctioning and wrong doing. He is a fitting example of ‘Mr. Fall Guy’ in the Indian cricket administration. Mr Modi promised to fight his case tooth and nail by challenging the decision of BCCI in the court of law. Whether he will be in the reckoning and manage to stage a comeback in the Indian cricket administration with a vengeance is the question everyone is asking, including the high officials of the BCCI and the fans of the game. Ganesha examines Lalit Modi’s ‘Surya Kundli’ and gives further inputs on what the future holds for him – 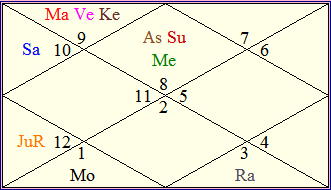 To sum it up, Ganesha feels that the current planetary transits do not indicate any immediate change in the state of affairs in Lalit Modi’s life and his problems look set to get threateningly insurmountable. It looks improbable for him to return to the mainstream of the Indian cricket, and even if he takes his case to the courts, it is highly unlikely that he will get any immediate reprieve.

His position, at present, looks tight and cornered. Although, he has expressed his intention to be back in the contention again with the proposal of global football league, things may take time to really materialise as per his expectations. The current transit of Rahu and Ketu also indicate heavy odds for him, at least till the middle of 2014. Even after the mid of 2014, Saturn may not give him any immediate respite, as he may have to face lots of struggle and strife.

The Positives – We cannot simply write off Mr. Modi and his capabilities. The strong position of Saturn and Jupiter indicates his power of endurance, and it will not be surprising at all, if we see Mr. Lalit Modi back again in the reckoning with a different ball game altogether. The 10th House Lord Sun is placed in the 1st House with Mercury in his Surya Kundli, thereby creating an auspicious ‘Budha-Aditya Yog’ for him, and also the Sun is powerful by being Vargottama in his Natal chart. He has acumen and intelligence to take things in his stride and forge ahead in life. His immediate future may be full of adversities, however his distant future will not be as difficult, and a strong Jupiter and Saturn in his Natal chart will again propel him to don the mantle in a new avatar. Maybe, Lalit Modi may try his luck in some other sport besides cricket, Ganesha does not rule out this possibility in Lalit Modi’s future state of affairs.